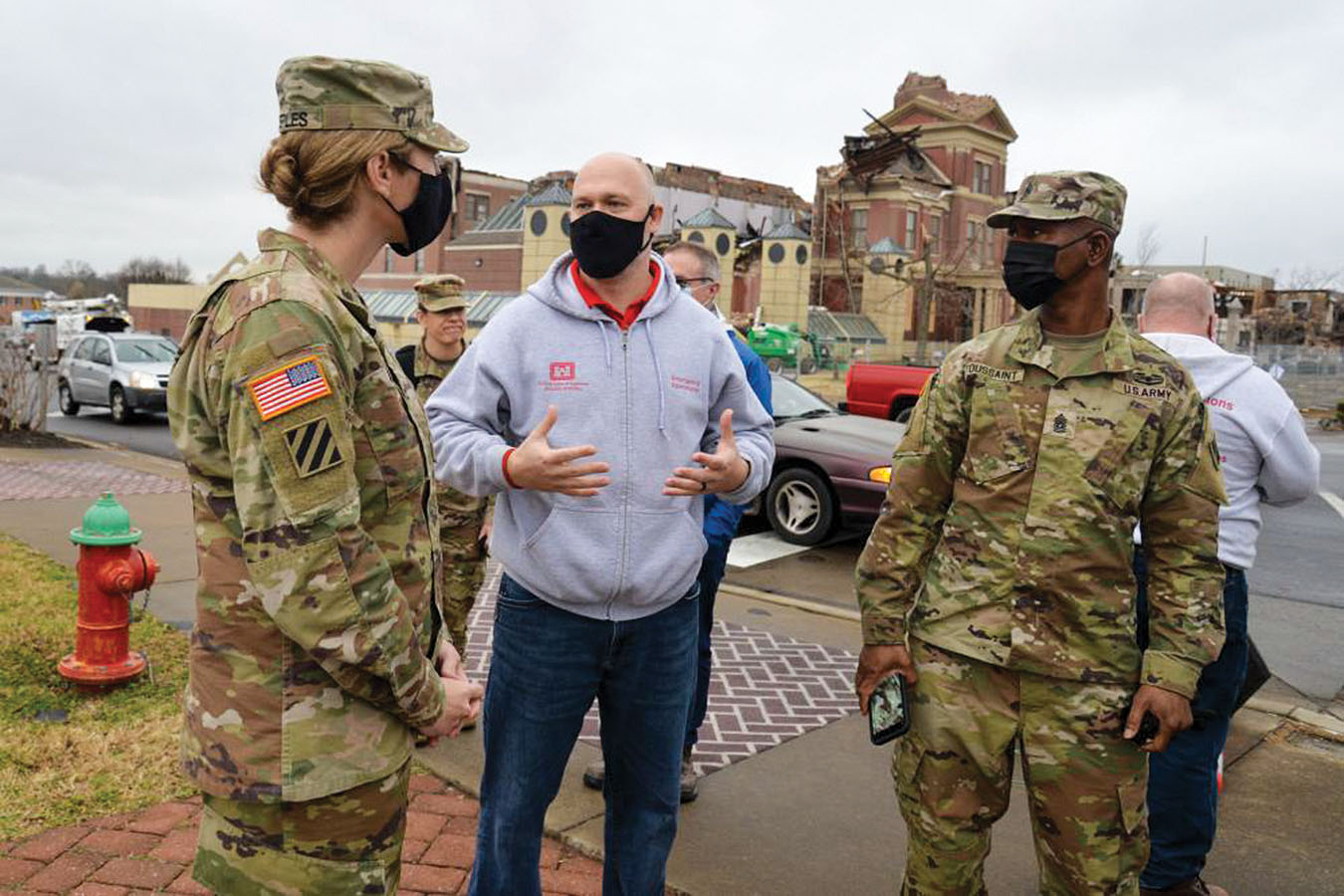 In fewer than three weeks, the Corps of Engineers has hauled so much debris from tornado-ravaged Graves County, Ky., that it is the equivalent of a football field piled 30 feet high with the remains of homes, businesses and trees.

George Minges, emergency management chief for the Louisville district, said a team arrived December 23 and has been working daily since then to clear rights-of-way where home and business owners are placing debris next to the road. The initial team has grown to 44 people now on the ground in Graves County.

The EF-4 tornado December 10 leveled much of the downtown business district of Mayfield, a city of about 10,000 people that is the seat of county government, before tearing across western Kentucky. It also caused severe damage in adjacent Marshall County and in the towns of Princeton and Dawson Springs and farther east. Other long-track tornadoes caused damage elsewhere in Kentucky, along with Arkansas, Missouri, Illinois and Tennessee, according to the National Weather Service.

In Mayfield, the tornado barreled down the city’s main thoroughfare, Broadway, destroying historic buildings on both sides of the street, including the Graves County Courthouse, Mayfield City Hall, the police and fire departments and virtually all businesses on and near the court square, along with surrounding homes. Gov. Andy Beshear reported a week after the storms that 77 people had died, including 21 in Graves County alone. That made the tornado the deadliest storm ever to hit the state.

The level of the devastation in Mayfield is what Minges said stood out to him.

“There is just the overall power and destruction of this storm,” he said. “It took me back when I first came in.”

He continued, “We do this all around the country,” and said the destruction in Mayfield stands out even when compared to his responses to Superstorm Sandy in lower Manhattan, N.Y., and to hurricanes Irma and Maria, Category 5 storms when they hit the Virgin Islands.

“Just to see the level of devastation this storm brought in just in one area, it’s a lot,” Minges said. “It’s just debris fields. Everything is scattered everywhere. You can see the hole in the skyline from where the historic buildings are gone.”

On some sites, he said, you can’t even tell there used to be a house there.

In contrast with hurricanes, he said tornadoes are “eerie,” destroying one property but leaving another one nearby completely untouched.

The power of such a large tornado is also evident.

Cleanup is an enormous job, but one to which the Corps has committed its resources, in partnership with local, state and federal agencies. The Corps has estimated it will take through April 29 to clear approximately 2 million cubic yards of materials from the roadsides throughout Graves County, Minges said.

Greg Hales, debris subject matter specialist from the Louisville district, said in a public meeting January 11 that teams had cleared 65,000 cubic yards of debris so far, all of which has been hauled to a landfill a few miles outside Mayfield. That represents 3.2 percent of the debris removal completed.

He reassured home and business owners worried they had missed their opportunity to have the crews haul away items that they would make many sweeps through the city and county.

“We will get them, and we will come back,” he said of removing the piles. “We are here for the long haul.”

In the days following the tornado, Corps of Engineers personnel from around the country responded to Kentucky.

The team staged in Greenville, Ky.

“I’m incredibly proud of the Pittsburgh District employees who answered our nation’s call on a moment’s notice,” said Lt. Col. Albert Butler, deputy commander of the Pittsburgh district. “We will do everything we can to help our fellow citizens during their time of need.”

The team delivered 16 generators and assisted as FEMA then brought in more than 60 additional generators to provide power to critical facilities, including hospitals and shelters for displaced residents as well as water pumps.

The tornado destroyed more than 1,000 homes in its 165.7-mile path through the state and left approximately 12,300 residents without power, according to the Corps. Initially, 135 personnel from several Corps of Engineers districts responded.

“People who are willing to deploy two weeks before Christmas to help those in need demonstrates how dedicated our people are to our mission,” said Al Coglio, chief of Emergency Management for the Pittsburgh district. “We’re ready to do whatever it takes to provide the people of Kentucky with hope, even in the face of disaster.”

Now more than a month later, the Louisville team is the only Corps team remaining in Graves County. A county volunteer response coordinator directs teams of volunteers to sort debris from properties into five piles and place them near the road. Nearly all of the debris is either in the construction/demolition category, which includes building materials, carpet, furniture and drywall, or the vegetative debris category, which includes tree branches and logs. Additionally, the Corps is picking up large appliances, electronic goods and hazardous waste.

Residents are overwhelmingly grateful for the help, Minges said.

“They have been outstanding,” he said. “They have been so appreciative. Going into restaurants and gas stations, almost every time somebody walks up to you and says ‘Thank you for what you’re doing. We appreciate you.’”

Still, he said, there are moments that catch those trying their best to help off guard a little emotionally.

For Minges, on one particular day, it was a toy Tonka bulldozer.