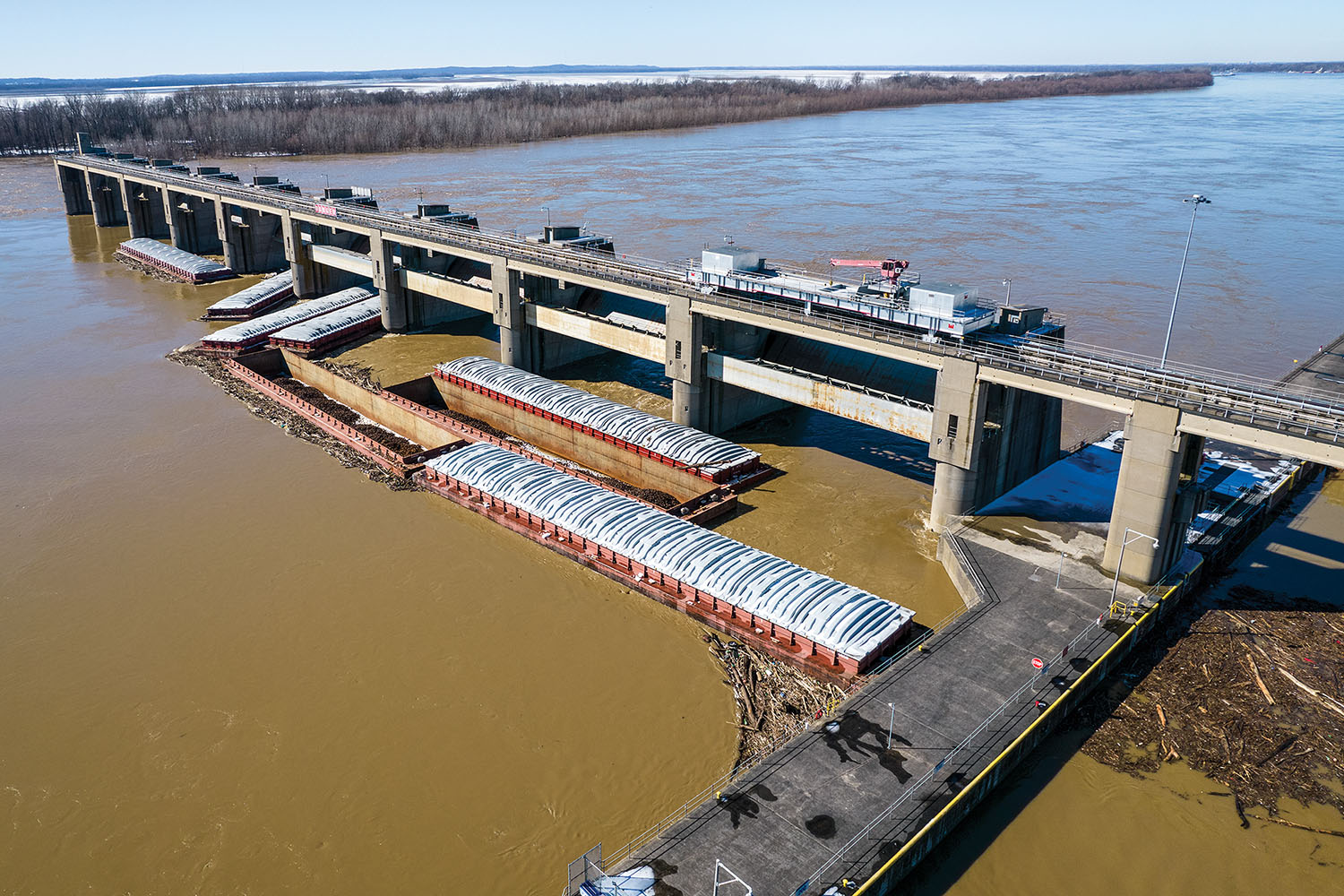 Five allisions on the Ohio River between February 5 and 8 damaged barges but caused no injuries or pollution.

After four allisions in a 48-hour period, the Coast Guard issued a warning to mariners February 7 about high water and “dangerous currents” on the Ohio, said Coast Guard Petty Officer Sydney Phoenix, a public affairs officer for the Eighth District.

Within hours, a fifth allision took place at Newburgh Locks and Dam, leading to its closure for several hours after an 11-barge tow broke free, and three went through the dam’s gates.

“Higher than average water levels have created stronger than normal currents on the Ohio River that are leading to dangerous situations,” the Coast Guard said in its warning. “Debris, rip currents and eddies are showing up in areas along the river where they don’t normally occur.”

“We urge mariners to be cautious and properly prepared before getting underway to ensure safe travel along the waterways,” said Capt. Eric Carrero, Eighth District Western Rivers and Waterways director. “Checking local Army Corps of Engineers, National Oceanic and Atmospheric Administration and the National Weather Service websites in your area for up-to-date water conditions along with local weather conditions can be key to safe transits along with rivers.”

The first incident involved the Superior Marine vessel mv. Bill Stile at Mile 237, near Racine, Ohio. It was reported to the Coast Guard that the towboat was making the downbound approach at the Racine Lock on February 5 with nine loaded coal barges when the starboard engine stalled due to debris in the rudder caused by high water conditions, said Petty Officer James Hague, an Eighth District external affairs officer.

“The casualty led to the starboard lead barge alliding with the lock wall, causing wires to break and the starboard stern barge to break free and transit through the dam,” Hague said. “The barge has noticeable but minor damage. No injuries or pollution were reported.”

On February 6, it was reported to the Coast Guard that the Triple S Welding & Marine Service vessel Jo Anne Stegbauer was attempting to land at the company’s dock near Owensboro at Mile 758.9. It was pushing four barges, two of urea and two empties, when the boat allided with a piling, breaking the starboard wire.

“The tow reportedly then swung out, causing the vessel’s port stern to allide with another piling, breaking the port wire,” Hague said.

A barge broke free, partially sank and was beached following the incident.

Also on February 6, the mv. D.A. Grimm, also owned by Superior Marine, struck a railroad bridge at Mile 184, near the mouth of the Little Kanawha River in Belpre, Ohio.

“The vessel lost three of the nine barges but was able to recover them all,” he said.

The Coast Guard also determined that incident to be caused by high water and water current in the area.

The fourth reported allision was February 7 when the mv. Marathon, owned by Marathon Petroleum Company, drifted into the lock wall at Greenup Locks and Dam, Mile 341, Hague said.

The towing vessel was pushing four loaded red flag barges, two of which were loaded with gasoline, one diesel and one jet fuel.

“The allision resulted in two 5-inch cracks above the waterline on the port lead barge,” Hague said. That barge was carrying gasoline.

There was also minor damage to the lock wall but no structural damage, Hague said. Again, the incident was reportedly caused by high water.

“The suspected cause is debris due to high water,” he said, but added that the incident is under investigation by the Coast Guard.

The Coast Guard was notified all 11 barges broke away and were pushing up against the dam. Three later went through the dam and floated downriver, where they were recovered.

Marquette led the salvage operations for the remaining eight barges. One of those also passed through the dam gates during recovery efforts but was corralled by a vessel on the other end, said Abby Korfhage, public affairs specialist with the Louisville Engineer District.

All barges were recovered by 5:30 p.m., and the locks reopened to navigation by 7 in the evening, Korfhage said.

Michael Borchers, chief of the hydrology and the hydraulics section at the Louisville Engineer District, said a storm system that passed through the Ohio Valley seems to be responsible for the problems, although the water is not tracking as abnormally high for this time of year.

The river peaked at 37 feet at Racine, Ohio, just below action stage, and was already back down to 19.5 feet by February 8. At McAlpine Locks and Dam, the river was at 18.8 feet as of the evening of February 7 and projected to drop back to a pool of 13 feet by February 11.

The area around Louisville was hit by a winter storm system February 2-5 that dropped the liquid equivalent of 2 to 3 inches of rain, he said. In some areas that fell as rain, in others as freezing rain, sleet or snow.

The storm caused a temporary surge in the river level that quickly abated but apparently not before causing problems downstream, Borchers said.

He had good news for the coming forecast. “For the next week, it looks like we’re going to dry out,” he said February 8. “I feel pretty confident about that.”

Long-term, he said, the National Weather Service is predicting a possibly slightly wetter spring than normal. However, Borchers said, such long-range forecasts are typically made with a low level of confidence.

Caption for top photo: An 11-barge tow broke free in high water February 8 on the Ohio River as it was upbound coming out of Newburgh Locks and Dam. Four of the 11 barges eventually passed through the dam gates, with the others stuck along the top side of the dam. They were all recovered during salvage operations throughout the day, and navigation traffic resumed that evening. (Photo by 270 Drone Aerial Imagery)