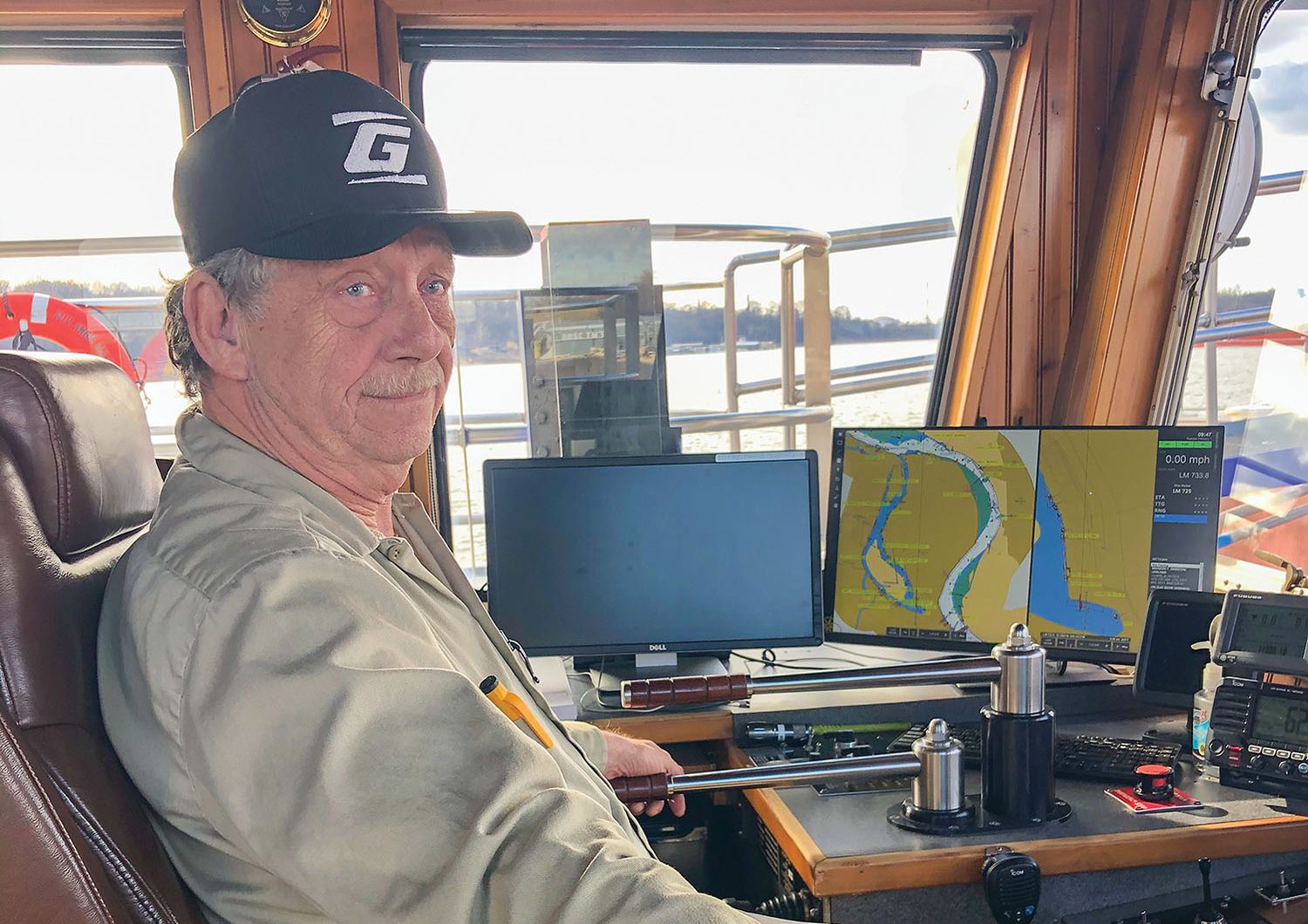 Chances are when Capt. William “Billy” Allen isn’t spending time with his four grandchildren and three great grandchildren during his off days, he is toying around with his three bass boats, two party barges or two Jet Skis that he keeps at his lakefront residence on Lake Bruin, an oxbow of the Mississippi River, near St. Joseph, La.

Capt. Allen, 68, is a senior captain with Golding Barge Line, Vicksburg, Miss., where he has worked for the greater part of his 40-year career on the river, the last six of which have been on the 3,000 hp. mv. Angie Golding.

“Capt. Billy started working for us in our shipyard in the 1970s as an electrician and mechanic when we were building boats here in Vicksburg,” said Steve Golding, chairman. Allen said he learned those skills from his father, a machinist who built his own house in Delhi, La., a small town about 40 miles west of Vicksburg, where Allen was born. He was raised in Tallulah, La. After high school, Allen installed the wiring on mobile homes built by a local firm there, he said.

From 1974-1976, he worked at Vicksburg Shipbuilders, where his brother Richard was a foreman. He wired such notable towboats as the mv. Superstone, Ann Gladders (now the Louisiana Belle) and the first Nathan Golding (now City of Jonesville). When the yard closed in 1976, he said, he went to work on the mv. Nathan Golding as an engineer.

“His background of building boats as an electrician and mechanic laid the foundation for his tremendous and complete understanding of everything that makes our boats perform,” Steve Golding said “There are a lot of good pilots on the inland waterways, but very few have the total and complete complement of talents that Billy Allen possesses.

“Billy is one of the most talented men I have ever had the pleasure of working with,” he went on. “He is not only a great pilot but has a complete knowledge of every aspect of the boat.”

Allen earned his pilot’s license in 1979. Then he set up his own company, W.A. Marine Service, as a contractor for Waterman Steamship Corporation, replacing hardware such as winches and timberheads on the company’s LASH barges. To move the barges around, he homebuilt a 26- by 8-foot, 250 hp. dinner bucket boat with a 15-foot eye level. He named it Miss Norma Ann after his daughter, he said. In 1984, upon Waterman’s demise, he “returned to work for Steve.”

“To this day, every Sunday I’ll get a call from one of the Goldings,” said Allen, “just to see how everything is going. This past Sunday, it was Steve, calling from Costa Rica,” he said, to underline the fact that Golding Barge Line treats its employees like members of the family, as trite as that may sound.

“Capt. Billy and I go way back to when we were both very young men just getting started in the boat and barge industry,” Golding explained.

Golding is not the only one in the company to hold Allen in high regard. Todd Hundley, port captain, said Allen is “one of our most trusted river captains. I lean on him for advice. His experience is invaluable to our operation.”

Asked about any incidents on the river that stand out in his memory, Allen recalled the time a towboat struck the bullnose of Lock and Dam 53 during a snowstorm and sank. He remembered they were nearby and were able to rescue the cook, who was floating in the river.

Capt. Allen doesn’t have a burning desire to retire. He’s in good health and loves his job. “I don’t know when I will do my retirement yet,” he said. One suspects, though, that he may have plans to spend some time in the future tracking down the “trophy” fish that have eluded him this far in Lake Bruin. To date, he said, the best he has to his credit are a 35-pound catfish and 2-1/2 pound bass.