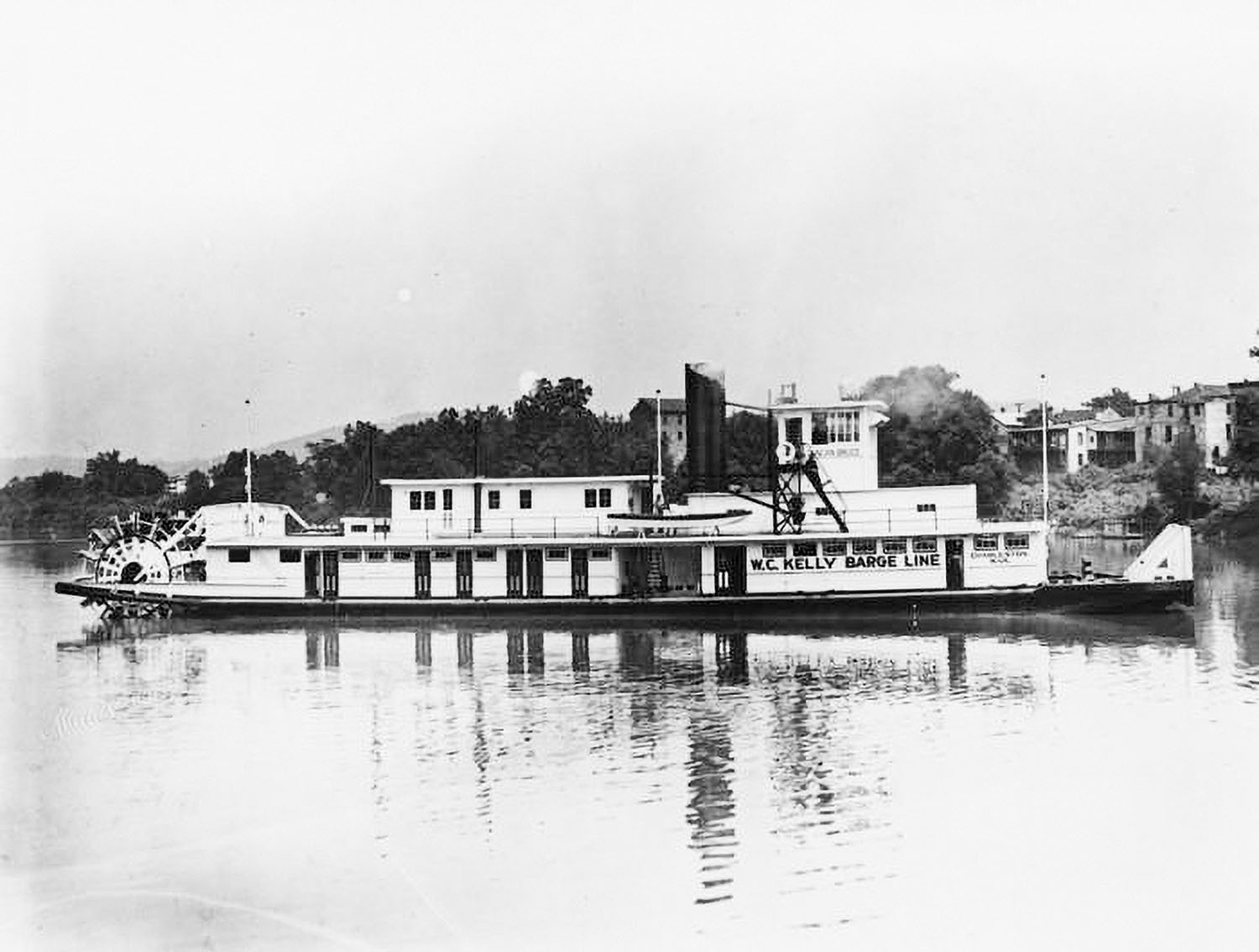 As mentioned previously in these columns dealing with early diesel towboats, the Charles Ward Engineering Works of Charleston, W.Va., was an early proponent of prop-driven vessels. However, in 1927, Ward constructed a towboat that was described in a 1978 paper written by B.F. McCabe Jr. and G. P. Parkinson Jr. as “A Last Attempt to Revive the Sternwheel Towboat.”

This was the Duncan Bruce, built for the W.C. Kelly Barge Line. Ward had previously built the smaller sternwheel W.C. Kelley and the twin-screw Geo. T. Price—both diesel-powered—for Kelly, and along with the Bruce in 1927 they also constructed the twin-screw W.A. Shephard for that firm, a near duplicate of the Price.

The Duncan Bruce had twin sternwheels, connected to a pair of 360 hp. Fairbanks Morse diesels by a complicated gearing system. The engines were located forward and in the hull of the vessel, with shafting running to the first series of gears in the stern compartment, and these were then linked to more gearing mounted between the sternwheels. The hull of the boat was 135 by 35 by 6 feet, with an overall length of 160 feet.

Each sternwheel was 12 feet in diameter, 11.5 feet wide and had 15 buckets. Each sternwheel could be operated independently ahead or astern, providing greater maneuverability over a traditional sternwheel boat. Four balanced rudders were located forward of the wheels.

The Bruce was completed in July 1927 and entered service for the Kelly Barge Line soon after. In late 1927, W.C. Kelly joined with Andrew and Patrick Calhoun to form American Barge Line. In December of that year, a contest of sorts was staged on the Monongahela River between the Bruce and the twin screw W.A. Shephard. The boats, equal in horsepower, were each faced to six loads of coal. In nearly every aspect, the prop-driven Shephard outperformed the sternwheel Bruce. The one exception was in flanking ability, and subsequent changes to the rudder configuration on the Shepherd and its near-sister Geo. T. Price corrected this.

The gearing system on the Bruce had many problems. Vibration led to wear and cracking of components. News columns in the Waterways Journal of the era often mention the boat in or having been in a shipyard for repair. In 1933, the Bruce was converted from sternwheel to twin-prop. At this time its original 720 hp. Fairbanks engines were retained.

On June 8, 1934, the Duncan Bruce was extensively damaged in a fire at Louisville, Ky. Photos of the aftermath show the boat essentially gutted by the fire. In this time frame, both the Geo. T. Price and W.A. Shepherd were fitted with an additional wooden pilothouse atop the original due to towing cotton stacked high on barges. The smokestacks of these boats were also extended above the new pilothouse. Though I have never seen a photo of the Bruce with an added pilothouse, the photos following the fire show that its stacks had been extended, indicating the possibility that it did have the extra pilothouse prior to the fire.

The Bruce was rebuilt at Jeffersonville, Ind., and returned to service, still with the Fairbanks engines and extended stacks. In the winter of 1938–39 it was repowered with a pair of National Superior engines with a total of 1,350 hp. By all indications, the boat performed well with these engines, earning the nickname “Drunken Brute.”

Robert L. Gray, long in the marine department of Ashland Oil and the man who brought radar to the rivers, once related to me that the Bruce was the first towboat that he ever set foot on. He was attending the Speed Mechanical & Technical College at Louisville, working toward a degree in diesel engineering and interning with Jeffersonville Boat & Machine (Jeffboat). Ashland Oil recruited him straight out of college in 1941 as they were building their fleet of diesel boats at the time.

The Duncan Bruce continued in the American Barge Line fleet until May 1947, when it was sold to O.F. Shearer & Sons. Many rivermen that I have known worked aboard the Bruce during the Shearer ownership, including Capt. Bert Shearer, who was often aboard it as master following the purchase. Capt. Ed Harris was a mate on it often, and Capts. Jim Lilly and Norman “Buck” Snodgrass are others who spent much time aboard.

In 1973 the Shearer river interests were acquired by Indiana & Michigan Electric (AEP), and the Duncan Bruce was sold to Capt. Robert H. Bosworth’s G&C Towing, Point Pleasant, W.Va. The boat was utilized on the Upper Ohio and Kanawha rivers, and Capt. Carl Simpkins was master early on. At one point, it was dispatched all the way to the Baton Rouge area with a “hot” barge. I heard Capt. Carl tell how old time rivermen on the Lower Miss were surprised and delighted to see the old boat again after many years.

I was a deckhand on a boat locking in the land chamber at Winfield Lock one cool evening, and the Bruce was locking up in the river chamber. I kept smelling coal smoke, and when the Bruce was raised to the upper pool I discovered the source. Its pilothouse was still heated with a pot-bellied stove, and the smoke was coming out of a stovepipe on her roof. When we were on the Kanawha River, and I knew it was coming, I would run to the head of our tow just to listen to it go by. The old Superior engines would rumble, whistle and chortle as the vessel eased by, blowing large smoke rings during the day and brilliant showers of sparks at night. I once confessed this to Capt. Bert Shearer during a visit with him when he was in his 90s. He laughed and said “I know what you mean, David. I used to get her on a good straight stretch and climb up on the pilothouse just to listen to her work.”

The Bruce continued working, usually on the Kanawha River, for several years. Capt. Carroll Yost was on it a good bit during this time. (Capt. Carroll really liked the old Bruce, and in later years when meeting him on the river I would call the Duncan Bruce rather than whatever boat he was actually on. Without fail he would answer, “WD 3049 the Bruce back!”)Its riveted hull got to the point that it was hard to keep water out of its fuel tanks, and four large cylindrical tanks were placed on its roof to hold fuel. In 1977, the Duncan Bruce was retired and sold to the Mansbach Metals Company at Ashland, Ky. The last time I saw it intact it was laying there, lights burning, looking for all the world like it was just waiting on a barge.

Mansbach cut the cabin off, and the hull was sold to McGinnis, which utilized it as a crane barge. It eventually sank in the Owensboro, Ky., area, was raised in pieces and brought to the Ashland area for final scrapping. Soon after its dismantling, Capt. James T. “Tony” Holbrook gave me an old cork lifejacket that he had found on it, and during the final scrapping a friend procured one of its kevels that he presented to me. These prized possessions serve to remind me of one of my favorite towboats, one that did not “revive the sternwheel towboat” but had a successful 50-year career nonetheless.