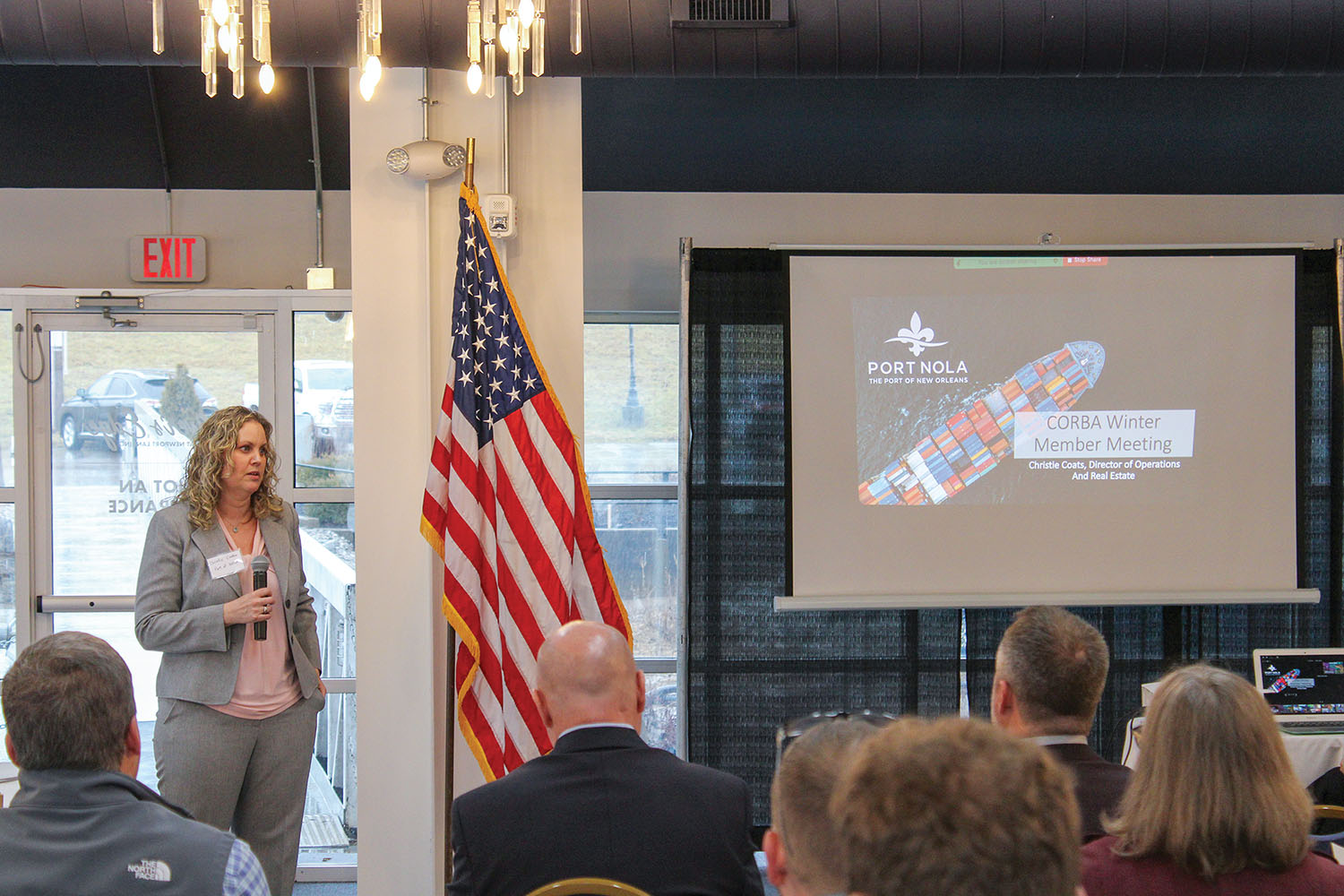 The meeting included the presentation of two awards.

Doug Ruschman, in-house counsel for McGinnis and CORBA’s new chairman of the board, presented the past chairman’s award to outgoing chairman Scott James, calling him one of the hardest working people he knows.

“It’s a rather daunting task to follow him,” Ruschman said. “He spent countless hours meeting with companies and potential government contacts about potential new businesses on the river.”

In James’ time as chairman, CORBA attracted 10 new members, and it now has 73 members and is continuing to grow, Ruschman said. CORBA also signed an extension agreement with the Port of New Orleans during that time, he said.

Mark Locker, the Ohio Department of Transportation project manager for maritime, freight mobility and logistics, accepted CORBA’s 2021 Friend of the River Award via videoconferencing technology. Eric Thomas, CORBA executive director, recognized several highlights from Locker’s 39-year career, including leading a study on the economic impacts of the Ohio River a few years ago that contributed to the development of the Ohio Maritime Strategy and the creation of Ohio Maritime Assistance Program (MAP) grants to companies with projects on the Ohio River and Lake Erie within the state.

Locker also spearheaded the creation of the Mid-Ohio Valley Port, a statistical port that encompasses nearly 220 miles of the Ohio River between Mile 40.0 and Mile 256.8, filling in a gap between the Huntington Tri-State Port District and the Pittsburgh Port District.

“Promoting and investing in the river takes a group effort, so I’d like to say thank you to CORBA and all your members for this award,” Locker said. “I am truly honored to be this year’s recipient of the Friend of the River.”

Northern Kentucky University has offered the global supply chain management degree for about five years. It started with two students and has grown to more than 120 active students.

“This comes at a time when, really, enrollment at college campuses is going down,” Thackeray said.

He said the program plans to hire two additional full-time faculty members soon and is the only program at NKU currently drawing additional students.

“I think it’s a sign of the importance and the relevancy of the program,” he said.

Many of the program’s 40 graduates are working in the community, including in the maritime sector. Thackeray said the university is also looking for businesses to become involved in a required capstone project for students and that because of response from companies saying they are most interested in hiring graduates with real-world experience, the university is altering its curriculum to require a minimum of three college credit hours to be spent as an intern with a company. Students may get credit for up to nine hours of continued internship experience.

Additionally, Thackeray invited companies to visit the program’s Hub of Supply Chain Excellence, built last summer. It includes classroom seating for up to 60 or boardroom seating for up to 20 people and is intended to be a space where businesses will have more opportunities to meet with students, he said.

Coats began by noting that although ships are waiting to unload for days or weeks at East Coast and West Coast ports, causing supply chain disruptions, the Gulf Coast is not seeing the same problems. Unfortunately, she said, relieving that congestion isn’t simply a matter of rerouting ships to Gulf Coast ports, which could create opportunities for more foreign products moving in containers along the inland waterways system.

“It’s multifaceted,” she said of the challenges Gulf Coast ports are facing getting more business from international shippers. “It’s not just one issue.”

Currently, she said, about 60 percent of the products arriving at East and West coast ports are used locally. Port NOLA has been studying what it would take to divert the remaining 40 percent of those products.

It is important to note that oceangoing carriers have no incentive to change the destination of their products, Coats said. They are being paid even when waiting out delays at U.S. ports. Additionally, each carrier has multiple vessels on a set route between ports and long-term contracts in place for the delivery of shipments at those destinations.

“It’s a huge undertaking to take a vessel out of rotation,” Coats said.

It’s not just repositioning one or multiple vessels, she said. It would also mean finding new ports with equipment capable of unloading and getting products to their final destinations in a more timely manner.

Although the widening and deepening of the Panama Canal is helpful in promoting freer flow of commerce, Coats said shippers continue to build larger and larger container vessels, many of which do not fit through the canal’s expanded dimensions.

For vessels that can fit through the canal or those coming across the Atlantic, the project to deepen the Lower Mississippi River from 45 feet to 50 feet the last 256 miles between the Port of Baton Rouge and the Gulf of Mexico will be helpful, Coats said, but she added that existing bridges are not tall enough for large container ships to fit beneath them. That is part of the reason why Port NOLA is developing an international container terminal on 1,200 acres in St. Bernard Parish, south of any obstructing bridges. On January 24, the Corps of Engineers issued a public notice to officially begin the multi-year permitting process for the terminal. If all goes according to plans, Coats said, the first berths at the new terminal should come online in 2027 or 2028, although dedicated barge berths are not in the first stage of the plans.

Moving Containers To The Rivers

Most shippers are tied into contracts with rail carriers that also prevent moving their freight to different ports, Coats said.

However, as cargo owners renegotiate contracts with shippers and shippers renegotiate with rail carriers, there could be an opportunity for some international cargoes to be diverted to the Gulf Coast, Coats said.

She advised keeping an eye out for the result of major contract renegotiations, including a contract with the International Longshore and Warehouse Union (ILWU) that comes up again in October.

Coats stressed that for containerized cargo to move up the river system, it will be necessary to either have vessels that can carry the containers on the river or to have a regular barge service between Gulf ports and more northern cities.

“The Port of New Orleans is very much focused right now on north-south connections,” Coats said.

To make these types of regular container service viable, there is a need for distribution centers and warehouses near population centers accessible to the river system, she said. She cautioned, however, that the Gulf Coast is already at a population disadvantage compared to both the East and West coasts.

Cargoes in high demand in the Midwest could be opportunities for container service growth. For example, Coats said that Port NOLA had turned away vessels because of a lack of existing warehouse space for plywood.

Thomas asked how CORBA members could help encourage better north-south use of the river system for containerized cargoes, including whether some type of strategic alliance would be helpful. Coats said important first steps could be to determine what products are in demand in cities along the river and what space is available near those locations with appropriate equipment, warehousing and existing infrastructure to speed the creation of a distribution system. It also could be helpful to facilitate conversations between economic development and transportation partners in a multi-state or multi-modal capacity to determine the entire region’s capabilities and to focus on investment collaboratively instead of competitively, she said.

Thomas noted that CORBA members want to encourage the success of container-on-barge services in other regions, including in Memphis, Tenn., and in St. Louis, Mo., hoping that once those services expand, it will create opportunities for cities farther upriver.

“The more that things are moving on the river, the more likely we are to have opportunities elsewhere on the river,” he said.

For containers to be rerouted to the river system, it will also be important to have a regular supply of empty containers and container chassis, Coats said.

“It’s one of the challenges everybody is having with regard to supply chain issues,” she said.

Container costs have skyrocketed during the COVID-19 pandemic. In January 2021, it cost about $5,000 to ship a container of cargo from Asia to the West Coast, Coats said. By December 2021, it cost $25,000. That has led to some international companies shipping empty containers back overseas to refill, rather than having them available for U.S. exports.

When containers are available, they may not be positioned so that they are accessible for Gulf ports. That realization is part of the reason Port NOLA acquired the New Orleans Public Belt Railroad in 2015. The railroad connects all six class 1 railroads in the area and is able to relocate containers and make them available for port tenants.

“Import and export balance is very important in all port operations, but that is something we’re really focused on,” she said.

Other opportunities to move international products via the river system could be in breakbulk transportation of cargoes currently moving in containers. While breakbulk cargoes had been decreasing at Port NOLA for the past seven years, with typical decreases of 15 to 20 percent yearly, last year the port had an increase in its breakbulk cargoes by 46 percent over 2020, in part because of the sudden increase in the cost of container transportation, Coats said.

“That is important because what’s happening is items that were going into containers are now going back over into breakbulk vessels,” Coats said.

An example, she said, is with the import of coffee beans for Folgers Coffee, which had been moving in containers for the past 30 years.

“Last month we took a breakbulk coffee vessel because it’s just that much cheaper for them right now to bring their coffee in not in a container but in a breakbulk vessel,” Coats said. She added that the port has been notified that seven more breakbulk vessels of coffee beans will be coming in the same way.

As supply chain issues are rectified, however, Coats expects products to move back into containers for the long-term.

“I think you’re going to see it swing back at some point,” she said.

Coats said Port NOLA is poised to work with customers interested in shipping their products via the river system.

The port already has a container-on-barge service that has expanded from once a week to twice a week between Port NOLA and Port Allen, La., repositioning empty containers.

“I think you’ll see more and more that there is more opportunity for container-on-barge,” she said.

The port recently purchased four new post-Panamax gantry cranes for its existing Napoleon Avenue container terminal, specifically with cargo on barge services in mind. They are being calibrated and are expected to be up and running by April or May. Port NOLA is also planning a dedicated berth for servicing barges at the terminal, she said.

Additionally, Coats said, Port NOLA is meeting regularly with real estate developers regarding the potential construction of distribution centers, both inside and outside of Louisiana. It doesn’t make sense for all distribution centers to be on port property, she said, but they will have to be by water, rail or road infrastructure. There is special interest in working with partners that have state-level incentives for development.

“One of the challenges we hear is that barge traffic is slow, but I don’t know how much slower it could be than having a vessel sitting out on the coast for 80 days,” Coats said.

That’s why, despite the challenges she described, Coats said she believes it is only a matter of time before more international cargoes are moving up and down the nation’s rivers from ports along the Gulf of Mexico.