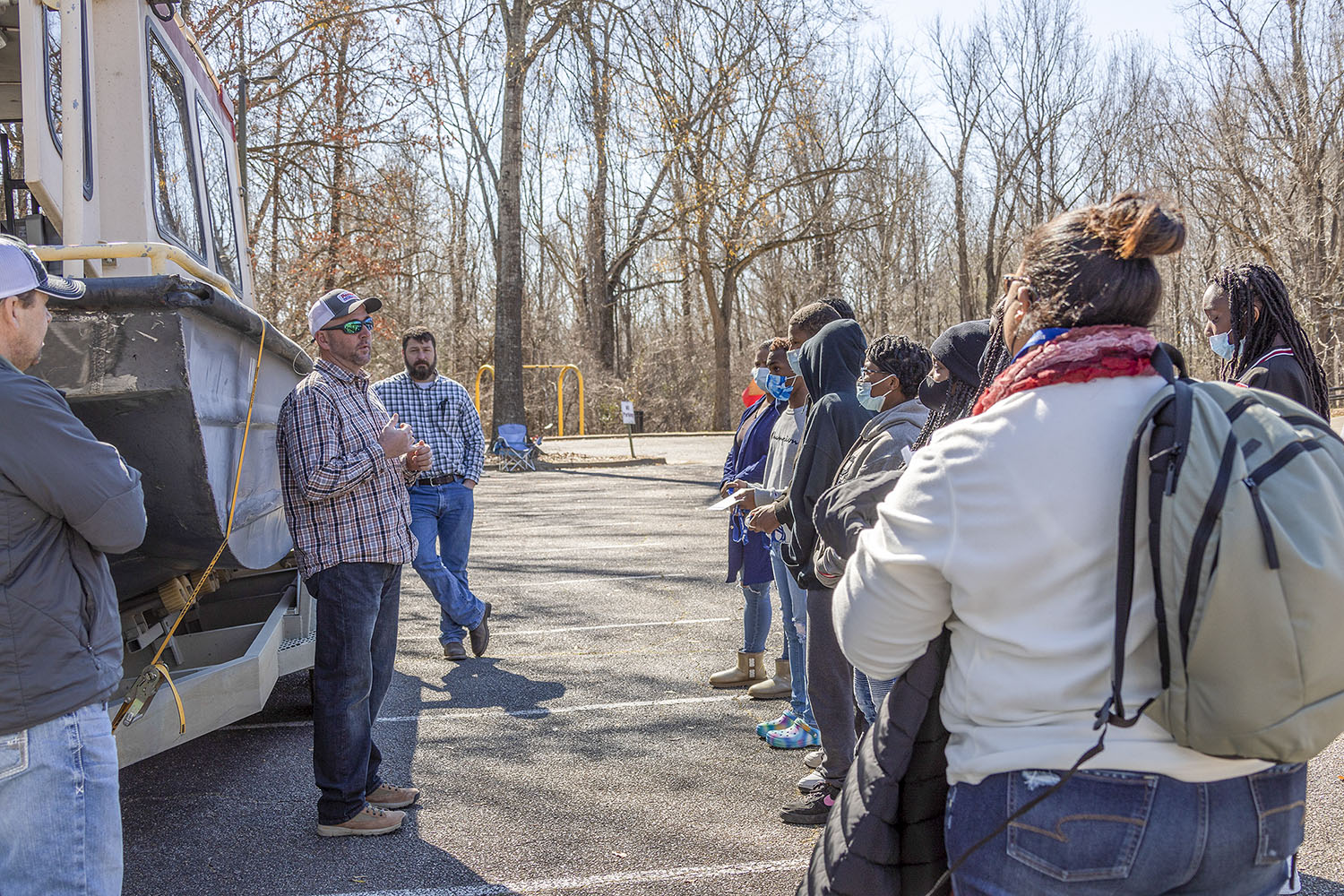 RiverWorks Discovery Holds Who Works The Rivers In Vicksburg

Hinds Community College in Vicksburg, Miss., hosted a Who Works the Rivers (WWR) career discovery day February 11, with about 150 high school juniors and seniors from five area schools attending to learn about opportunities available to them in the maritime industry.

Students had the opportunity to visit seven stations, which included line throwing, a safety station, Coast Guard and Corps boats and representatives, a welding demonstration and a commodities station. Also while at Hinds, students heard an overview of the maritime industry, with both in-person and recorded presentations.

Errin Howard, program director for RiverWorks Discovery, said, while not all 150 students will enter the maritime field, it was evident that the event connected strongly with many attendees.

“There truly were some interested in every group,” Howard said. “I think we opened some eyes and had some good questions asked.”

Howard said the students particularly connected with the personal stories that company partners shared during the event, including that of Brad Babb, safety and compliance manager for Big River Shipbuilders, a Vicksburg-based company that offers vessel new build and repair services, both land and river offsite construction, and salvage and firefighting services.

Babb told students that his early career had nothing to do with the maritime industry.

“I was working as a teacher and coach for the Vicksburg Warren School District, working primarily with English and history, while coaching baseball,” Babb said. “This was my dream job when I was younger. At 37, I decided my dream job was not all I was hoping it would be.”

At his school, Babb had worked with the daughter of J.O. Smith, president and CEO of Big River Shipbuilders.

“He saw something in me and offered me a job with the fabrication shop,” Babb said. “Over time, I was allowed to learn every facet of this company. I spent time with welders, fitters, machinists, boat crew, crane operators. I learned their jobs and responsibilities. I learned the office side of billing, quoting, financials and human resources. [Smith] pushed me to learn as much as I could and promised that every day would be different. He didn’t lie about that.”

When Subchapter M went into effect, Babb was tasked with vessel compliance. He said that’s when his English and reading comprehension training paid off. Babb has now been with Big River Shipbuilding for eight years.

“I want the kids to think of the maritime industry as more than just towboats and deckhands,” he said. “We have so much to offer from every aspect of job classifications.”

Students also had the chance to visit the Jesse Brent Lower Mississippi River Museum, which included a tour of the mv. Mississippi IV.

Howard said WWR events are all about raising awareness of the people and companies that work on the nation’s rivers, and several teachers, chaperones and students from Vicksburg have reached out to say the event did just that.

“The students who attended Who Work the Rivers gained a great deal of knowledge regarding their options when exiting high school, if they want to stay in their hometown and contribute to the work done here on the river,” one student said. “Students were shown several different avenues that could become a great source of income and livelihood for them upon graduating high school. Many of the students had no idea of how many options were available prior to attending Who Works the River. I think this was a great learning experience for our students as they begin to prepare for the future.”

“The field trip helped increase our knowledge in a particular environment and expanded our awareness of our own community,” another student said.

“Thank you guys for expanding the minds of our future leaders as well as our today’s leaders,” a teacher from Vicksburg High School said. “I learned more about the Mississippi River in one day than I have my entire life.”

“Many companies gave detailed job descriptions,” another teacher said. “This information was beneficial to the students. The students were impressed with how fast one could progress in this industry in status and salary. … I have reason to believe the students enjoyed learning about potential career opportunities as much as I did.”

Howard said the goal for RiverWorks Discovery and Who Works the Rivers is to help grow the maritime industry’s next generation workforce. And there’s tangible evidence of success. Howard said American Commercial Barge Line has added “RiverWorks Discovery” to its list of options on the company’s application under the “How did you hear about us?” question.

“They pulled from July to the end of 2021,” Howard said. “Eighteen people said they heard about the job through RiverWorks Discovery. That tells me our efforts are working.”