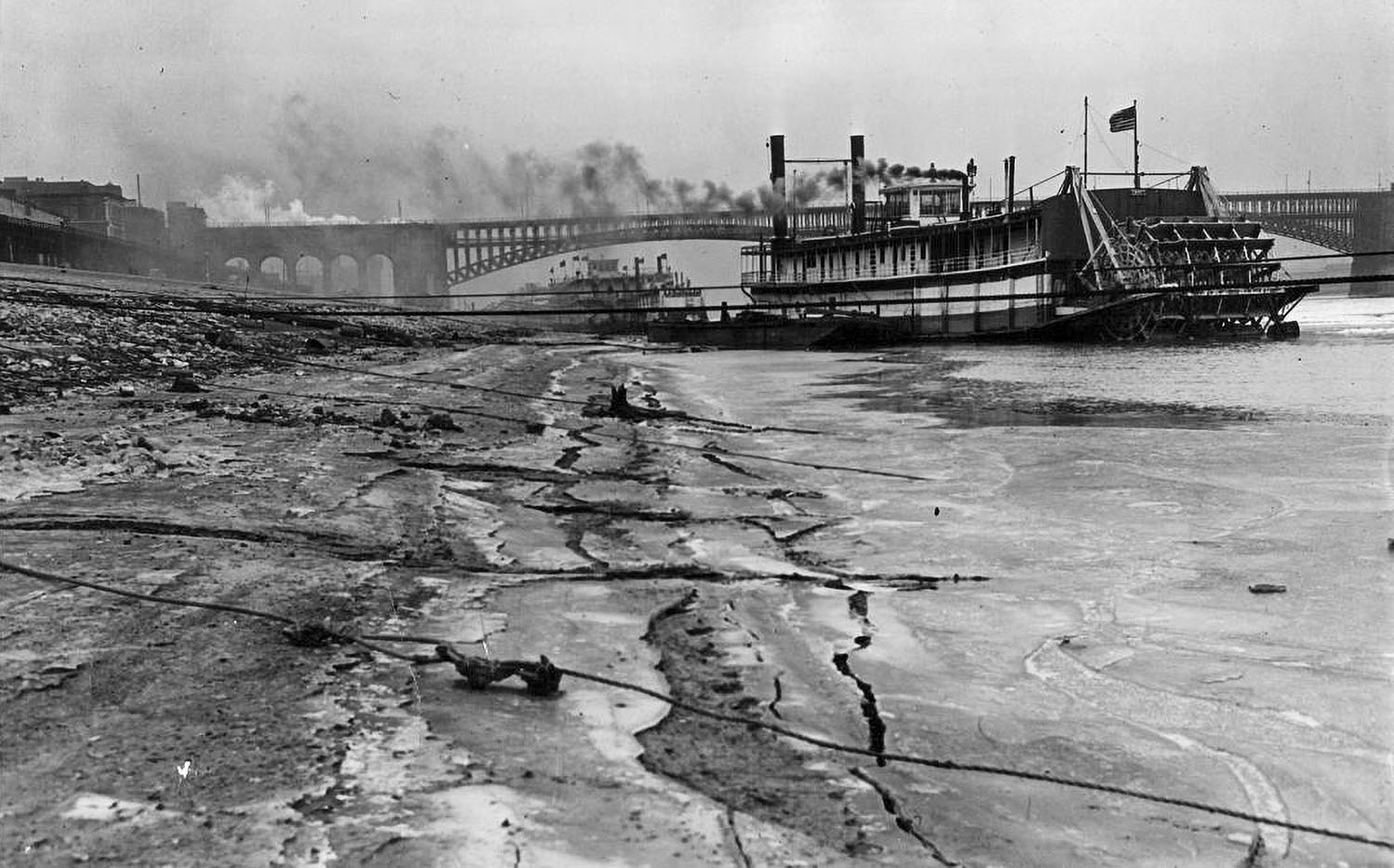 Winter On The River

Editor’s note: Keith Norrington is retiring as Old Boat columnist for The Waterways Journal after a decade of weekly articles. His final column will appear April 4; until then, we will rerun several of his favorite pieces from the last 10 years.

Happy spring! As we bid farewell to winter, the Old Boat Column presents an image taken nearly 85 years ago on December 12, 1937.

The photograph of the ice-tinged St. Louis levee was publicized as having been snapped during the lowest water on the Mississippi since the United States Weather Bureau began keeping records of river stages in 1861, with the water being at minus 5 feet, some 10.6 feet lower than the normal level for December. Note how far the water has receded from the point where the cobblestones of the wharf end.

In the distance are Capt. J.W. Menke’s Goldenrod Showboat and the steam towboat Wenonah (formerly the Little Clyde), which had established permanent residence at St. Louis two months prior.

Prominently in view, amid many lines and cables, is the towboat Gold Shield, built at Dubuque, Iowa, in 1899 as the Wynoka for the Mississippi River Commission. In October 1901, the cabin and pilothouse were destroyed by fire at O’Donnell’s Landing, Ark., below Cairo. After resuming service, the boat was transferred in 1905 to the St. Louis district of the U.S. Army Corps of Engineers.

With a steel hull measuring 171 feet in length by 36 feet in width, the engines had 22-inch cylinders with an 8-foot stroke and were identical to those placed on the towboats Sachem, Choctaw, Nokomis and Leota.

In April 1926, the boat made a notable trip to St. Paul with five barges of water ballast to pioneer the possibilities of an Upper Mississippi extension of the Federal Barge Line. The tow went aground at Island 17, and the trip was completed by the General Ashburn.

The Wynoka struck a rock and sank at Rock Island on August 4, 1929, but was raised and repaired at Keokuk.

When this writer was a crew member aboard the steamer Delta Queen in the 1970s, one of the frequent trip pilots was the late Capt. C.S. “Rip” Ware, who worked on the Wynoka and often regaled us with colorful stories of his early river career.

Sold at public sale to the Bisso Coal & Towboat Company at New Orleans, the new owners replaced the engines with those from the Oscar F. Barrett and renamed the boat Bisso, using it in the general towing trade. Two years later, in 1935, the vessel was sold to the Commercial Solvents Company, and its primary function was to take tows of molasses from New Orleans to Peoria.

In 1938, the boat had the dubious distinction of breaking two paddlewheel shafts within seven months; the first incident occurring in March just above the Eads Bridge and again in October below the Wabash Bridge at Meredosia, Ill. The Gold Shield sank near the Todd-Johnson Drydock at Algiers, La., in April 1939.

The second image, taken nearly five decades ago on the miserably frigid day of January 9, 1973, shows a much different St. Louis riverfront, with the soaring Gateway Arch seen from the Illinois shore as huge chunks of ice choke the Mississippi River. Hibernating riverboats (all of them now gone from the waterfront) dimly seen through the morning mist are, from left, the diesel excursion boat Samuel Clemens followed by the restaurant/museum sternwheeler Becky Thatcher (formerly the U.S. Army Corps of Engineers steamer Mississippi), the Goldenrod Showboat and the Streckfus excursion steamer Admiral, with the Huck Finn (since 1995 the Spirit of Jefferson which operated for a time at Louisville, Ky.) alongside. At right is the famed Eads Bridge, opened in 1874.

Caption for top photo: The towboat Gold Shield on a wintry day at the St. Louis levee. (Keith Norrington collection)