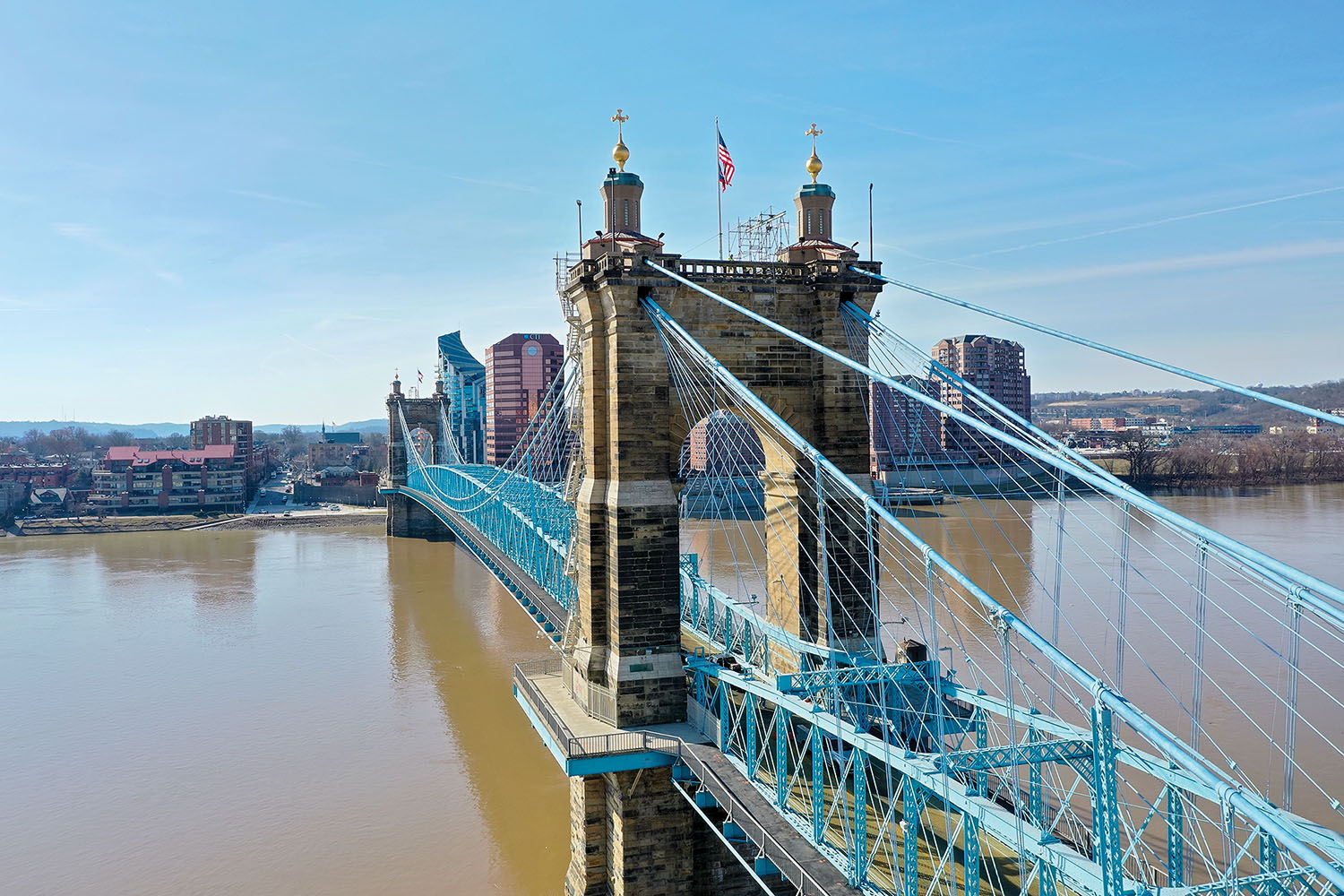 A 155-year-old Cincinnati bridge closed to vehicle traffic for more than a year is expected to reopen this spring, according to the Kentucky Transportation Cabinet (KYTC).

The John A. Roebling Bridge spans the Ohio River between Cincinnati in Ohio and Covington in Kentucky. It has been closed to cars and trucks since February 15, 2021, while a pedestrian sidewalk has remained open.

No specific date has been announced for the reopening, but KYTC officials said March 12 that the bridge is on track to do so this spring. Meanwhile, engineers are working to design plans for additional repairs to address deeper masonry stone deterioration uncovered in a section of the archway during the project, KYTC said.

The bridge was previously closed in April 2019 after sandstone pieces broke off the east side of the bridge’s north tower, KYTC said. It reopened four months later after crews installed protective netting.

“Like the citizens and businesses in Covington and Cincinnati, we are eager to reopen the bridge, but we’re committed to doing it right by not cutting any corner that may compromise safety,” KYTC District 6 Chief District Engineer Bob Yeager said. “Repairing a structure this old sometimes means making necessary adjustments in repair plans to address things that can only be best seen once you’re ‘under the hood.’ Our consultants and crews are working as hard as they can to safely recommission this historic structure.”

The bridge was originally expected to reopen November 15, but at the time officials said more work was needed. It was then planned to reopen January 24, but KYTC reported work had been delayed because wintry weather caused the concrete on the south side of the bridge not to reach its full strength.

The Roebling Bridge, designed by civil engineer John Roebling, opened on January 1, 1867. At the time, its 1,075-foot span made it the longest bridge in the world, according to roeblingbridge.org, a website administered by the Covington-Cincinnati Suspension Bridge Committee, a citizens group dedicated to the preservation and enhancement of the bridge. Considered an engineering marvel at the time, the bridge was especially noteworthy for its two primary cables, each containing 5,180 individual wires, according to roeblingbridge.org. The cables were “spun” in place using wire imported from England. A second set of cables was added in 1897 to support heavier loads.

Nancy Wood, spokeswoman for KYTC District 6, said the bridge was a prototype for the Brooklyn Bridge in New York, which Roebling also designed. The John A. Roebling Bridge was recognized as a National Historic Landmark in 1975.

The Roebling Bridge carries about 8,100 vehicles a day.

Caption for photo: The John A. Roebling Bridge, a suspension bridge crossing the Ohio River between Cincinnati, Ohio, and Covington, Ky., opened in 1867. It is expected to reopen this spring following completion of repairs that have kept it closed to vehicle traffic for more than a year. (Photo by Nancy Wood/Kentucky Transportation Cabinet)