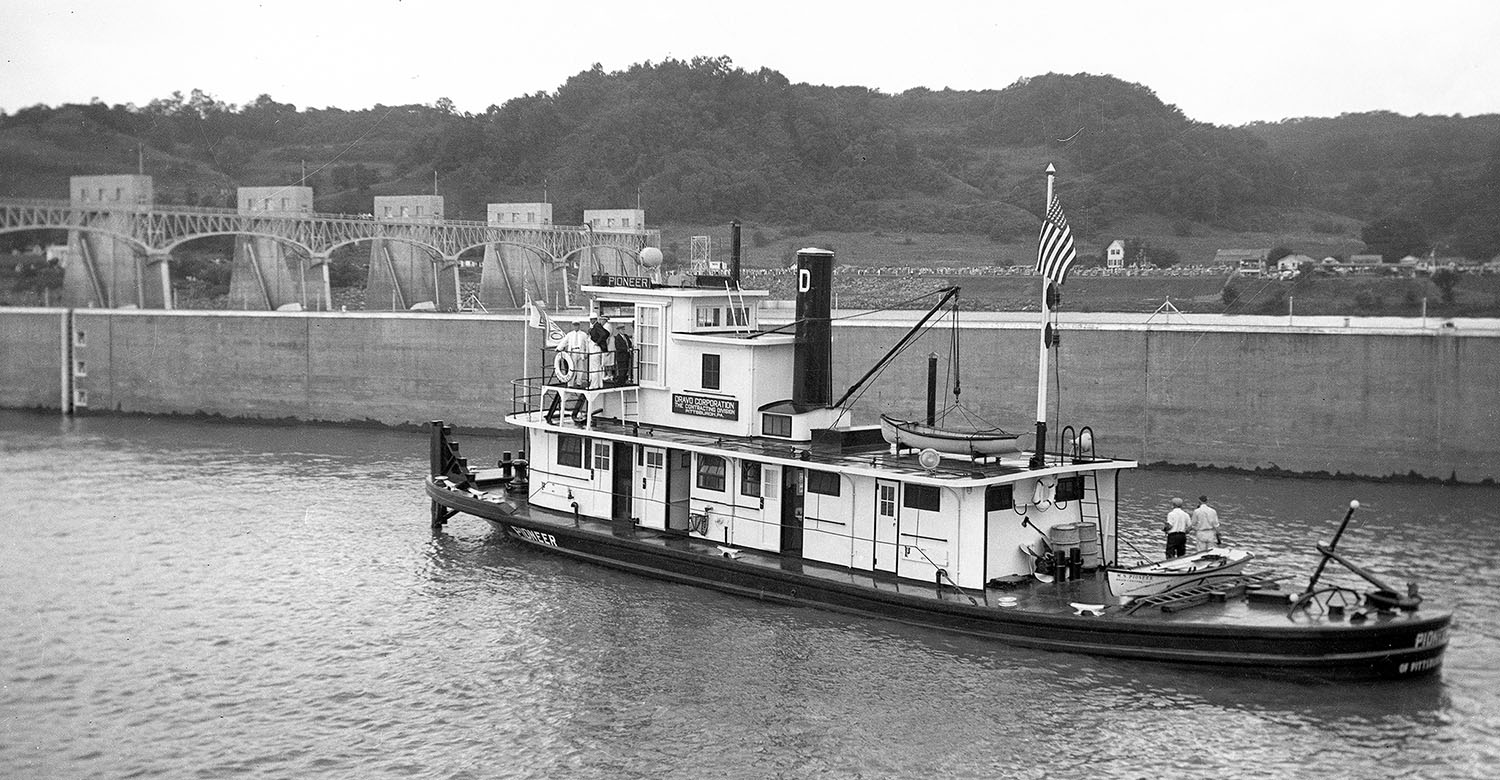 The Pioneer Lived Up To Its Name

The Dravo Contracting Company experimented in building a steam prop towboat in 1919 that it named Peace. Following the construction of this vessel, the company built mainly sternwheel vessels, both large steam-powered craft and smaller diesel-equipped boats. In 1930, two large steam prop boats were constructed by Dravo for the fledgling Mississippi Valley Barge Line, the Ohio and Tennessee.

In 1934, while planning and building two large diesel propeller boats for their internally owned Union Barge Line, Dravo also built a smaller single-screw diesel boat named Pioneer. This boat was 94 by 21 feet and had 250 hp. from a Nelseco diesel engine. The stern was rounded, somewhat like would be found on a blue-water tug, and it had a single stack and a pool-style pilothouse with a small cabin behind. The name selected, Pioneer, would prove to be prophetic.

The Pioneer was utilized in the contracting division of Dravo and was instrumental in the construction of the high-lift locks and dams being built at the time on the Kanawha River, as well as the Gallipolis Locks and Dam at Ohio River Mile 279.2.

Capt. Charles H. Stone of Point Pleasant, W.Va., was a young pilot at the time and worked on the Pioneer for Dravo, and he often spoke of his experiences. (He was aboard the Pioneer for the dedication of the original Gallipolis Locks in 1938, and when the new larger Robert C. Byrd locks were dedicated to replace the Gallipolis facility in 1993, Capt. Stone and the Pioneer were both there for the event.)

Dravo had become a concern with international reach, and according to the Dravo publication “A Company of Uncommon Enterprise,” in 1936 Dravo chairman J.D. Berg and president V.B. Edwards were on a business trip to Europe where they observed an interesting development for inland waterways vessels there. Beginning in the 1920s, in an effort to minimize erosion to the bottom and sides of navigational canals, the German Ministry of Transport had instructed owners of large tugs to install a guard around the propeller in an effort to reduce the amount of wash from the wheel. It was later noticed that this somehow seemed to make the vessels faster and delivered a greater thrust.

Ludwig Kort of Hanover, Germany, experimented with shapes and sizes of these guards to evaluate their effectiveness. The result was the kort nozzle.

Dravo obtained permission to try the device and installed one on the Pioneer. On May 13, 1937, it made a trial run with the kort nozzle, and the results must have been satisfactory as an agreement was executed between Dravo and Kort on May 25, 1937, giving the company exclusive rights to promote the device in the United States.

Dravo had two boats very similar to the Pioneer under construction at their Neville Island, Pa., shipyard at the time, and the decision was made to install a nozzle on one of them. These two boats were the Dravo 41 and Dravo 42. It can be assumed that the Dravo 41 was further along in construction when the decision to install a nozzle was made because it entered service in October 1937 as an open wheel boat, and the Dravo 42 entered service in January 1938 with a kort nozzle. In actual contests between the two boats shoving loaded tows, the Dravo 42 developed an estimated 25 percent more thrust than the Dravo 41.

According to Dravo, this series of tests and the introduction of the nozzle “dealt the final blow to the dying sternwheel boat.”

In 1939, Dravo began construction on the first major line-haul towboat to be equipped with kort nozzles, and this was followed in 1940 by a whole series of 760 hp. boats outfitted with them. The large diesel prop towboats that they had built for Union Barge Line in 1934 were retrofitted with nozzles, as were many other existing vessels throughout the coming years. Eventually other shipyards obtained permission to build kort nozzles, and they became standard equipment on most larger new-build line-haul vessels, continuing to this day.

The Pioneer continued in the Dravo Contacting division and was repowered in 1952 with a Cat D397 diesel of 400 hp. In 1966, it  was sold to Allegheny Towing Inc., Coraopolis, Pa. Allegheny rebuilt the boat, raising the pilothouse, and in 1975 repowered it with a 900 hp. GM 16V-149 diesel. In 1991, it was sold to Campbell Transportation Company, Charleroi, Pa., which had it at various facilities until it was scrapped in July 2014. At some point the historic first nozzle had been removed.

This relatively small and unassuming vessel had been a true Pioneer in the industry, having ushered in one of the most important innovations found on modern river towboats.

Caption for top photo: The Pioneer at the new Gallipolis Lock for the dedication ceremony in 1938. (Photo courtesy of Capt. C.R. Neale)