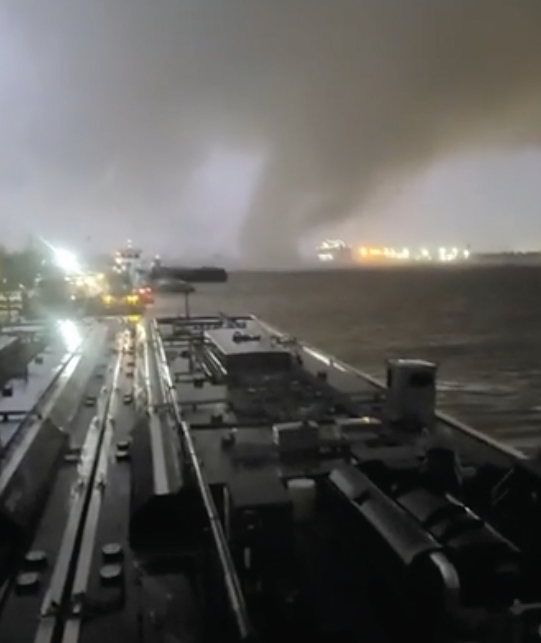 A strong cold front stretching from the Gulf of Mexico up to Tennessee passed through southeast Louisiana in the evening hours March 22. The same storm had already generated tornadoes to the west, and the weather forecast for Louisiana put much of the state at an enhanced to moderate risk for severe weather.

The squall line reached the New Orleans metro area around 7:30 p.m. As it moved through the area, from west to east, the storm produced a rarity for the region south of Lake Pontchartrain—a large tornado that not only remained on the ground for some time but also crossed the Mississippi River.

The National Weather Service estimates it to have been an EF-3 tornado that first touched down near the city of Gretna, on the west bank of the Mississippi River, moving in a northeasterly direction. It appears as if the tornado was off the ground as it passed over the New Orleans neighborhood of Algiers. It then touched down again on the western side of the river near Dockside Fleet.

The storm moved across the river, eventually going ashore in the St. Bernard Parish neighborhood of Arabi, where it left a path of destruction. The tornado eventually moved into New Orleans East before dissipating.

According to estimates from the National Weather Service, the tornado had peak winds of 160 mph, left a path 11.5 miles long and reached a maximum width of 320 yards. One person died in the tornado.

David Mark Poindexter, a captain on a towboat moored at Star Fleet that night, captured a video of the tornado crossing the river.

“The warning went off on my phone, saying there was a warning in the area, and you could feel the pressure change pretty quick,” Poindexter said. “There were some seagulls and some ducks out there, and they went nuts. I went out with my phone and started recording.”

Poindexter said it looked as if a second funnel cloud lowered and joined the original tornado as it crossed the river.

In the video, Regent’s Seven Seas Mariner cruise ship can be seen southbound on the Mississippi River, with the tornado moving between it and Poindexter’s towboat.

“That ship wasn’t very far,” he said. “I would say about a minute from it, if that.”

Poindexter has been in the wheelhouse about 25 years and, while he’s been on the boat in hurricanes, he’s never been through a tornado on the water before.

“I would say a tornado is probably more unpredictable and faster and more dangerous than a hurricane in terms of preparing,” he said. “The warning went off on my phone and in less than a minute it was here. In a hurricane, you have plenty of time to prepare, to move, to get out, to move to safer ground. In a tornado, once you get that warning, it’s pretty much there.”