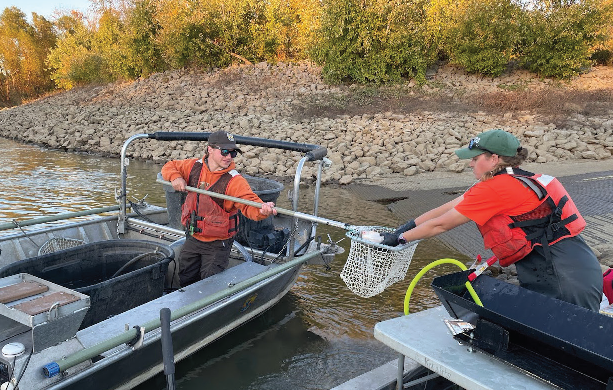 Recent lock closures at Barkley Lock and Dam in western Kentucky are helping researchers determine more about the movements of invasive Asian carp and how best to contain their spread.

In November 2019, officials with the U.S. Fish and Wildlife Service and partner agencies installed a bio-acoustic fish fence (BAFF), at an angle across the lower lock approach so they could determine if it helps prevent the spread of the fish from the Cumberland River into Lake Barkley. The curtain of bubbles and the underwater lights and sounds may be noticeable to those navigating the lock, especially in lower water conditions.

During the study period, which is now forecast to conclude in fall 2023, researchers turn the fence on for a week and off for a week and watch the movement of tagged silver carp through it, said Rob Simmonds, the U.S. Fish and Wildlife Service deputy fisheries program supervisor for aquatic invasive species.

Lock Closures
The lock, at Cumberland River Mile 30.6, closed from 6 a.m. to 6 p.m. for about two weeks beginning January 15 to allow crews replace components of some of the 30 sound projectors built into the BAFF.

The lock then closed again from 6 a.m. to 6 p.m. daily March 21-27 for a software update that required divers to hardwire certain components as well as for a “sound survey” that allows a boat crew to map out how the sounds transmit through the water at various depths and distances from the BAFF.
“We have conducted sound surveys in the past, directly over the BAFF where the sound is most effective,” Simmonds said. “This additional survey will map a much larger area and may help us understand how fish are experiencing the sound in those locations and help us understand some fish movement patterns we are seeing in the approach to the BAFF.”

Spring Carp Tagging
He noted that crews are trying to get as much of the work done as possible prior to a spring tagging event scheduled to begin the week of March 28 and continue for two weeks.

Jessica Morris, fisheries program coordinator for the Kentucky Department of Fish and Wildlife Resources, said crews will net Asian carp and perform a simple surgery that implants a radio transmitter so their movement can be monitored.

“We’ll actually be on-site at Barkley Lock and Dam, tagging about 500 Asian carp, tracking their movements and seeing if they cross that BAFF,” she said.

Tagging takes place for a couple of weeks each spring and fall. While the work is taking place, those approaching the dam may notice more small boats for netting and tagging the fish and a crew of about a dozen people on hand, Simmonds said.

The tagging will also help researchers as they work on a national population assessment for Asian carp, he said.

“Ultimately, we need to know if we’re making a difference, whether it’s the removal efforts or deterrents or anything else, so hopefully that assessment will help us be able to answer the question of ‘Is it working?’ ” Simmonds said.

The BAFF was built at Barkley to test whether installing more of the fences could be an effective option for helping to prevent the spread of Asian carp from the Illinois River into Lake Michigan. For the test structure, researchers wanted an area where the only way through the dam was via a lock and where Asian carp were already known to be both in the river and the lake.

Early BAFF Data
It is too early in the study to determine whether the BAFF is working, although some limited data is available, Simmonds said.

When researchers tagged silver carp swimming just below the dam in the Cumberland River in the spring and summer, 18 crossed the BAFF when it was off and only one when it was on, the study showed.

However, researchers considered fish just upstream of the dam, which had likely already moved from the river up into the lake in their lifetimes, to be more “motivated” to cross the BAFF.

When researchers caught fish from inside the lake and relocated them to the river, whether they moved back upstream depended on the time of year. Early data showed 57 fish crossed the BAFF when it was off and only four when it was on in the cooler months. In spring and summer, when carp tend to move upstream to spawn, however, 190 fish crossed the fence while it was off, and 82 fish crossed while it was on, Simmonds said. The difference is about a 14:1 ratio in winter months vs. a 2:1 ratio in summer months.

Simmonds said the continued research will let researchers know if these ratios are consistent over time and if there are certain times when fish are more likely to cross the BAFF, such as when a tow crosses the BAFF in either an upstream or downstream direction. This may help them identify opportunities where the BAFF might be operated differently to decrease the number of invasive carp crossing the BAFF.