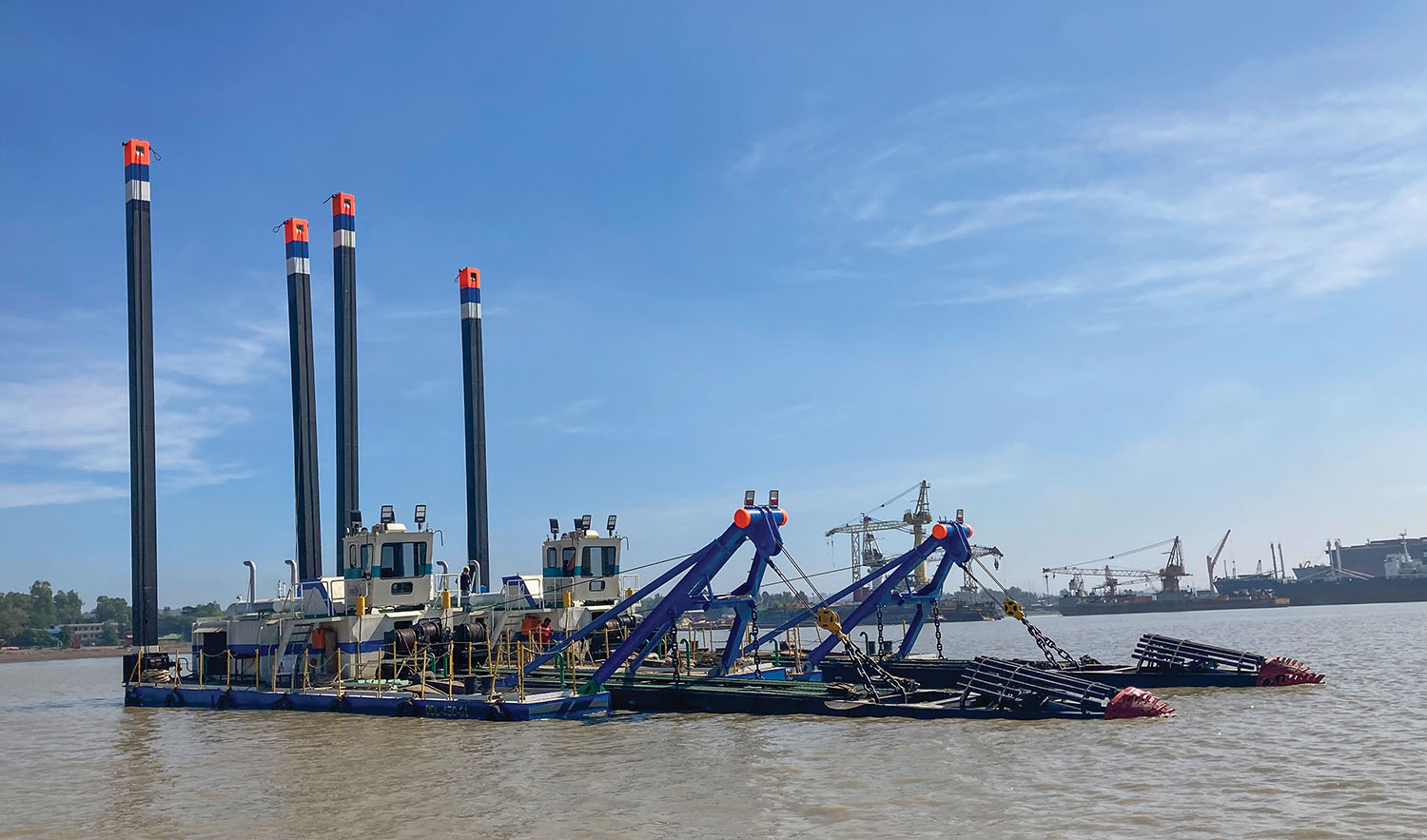 Reserve, La.-based DSC Dredge has been active in the global dredge market for more than 25 years, with dredges delivered to more than 50 countries over that time. In some cases, DSC builds the vessel in the United States and arranges for delivery overseas. Other times, some vessel components—like the hull or pontoons—are built overseas, with DSC building and shipping some components from the United States.

This innovative approach to dredge construction in the world market plays a big role in DSC’s operations.

For example, in 2004, DSC was hired to deliver a 24-inch Shark class dredge to the United Arab Emirates. In that case, the pontoons for the dredge were built in Abu Dhabi.

“Building the pontoons locally reduced the freight costs considerably, provided for a transfer of technology and increased local jobs, so it was a win-win for everybody,” said Charles Sinunu, director of international dredge sales for DSC. “Exports are very important to our overall success, accounting for more than 50 percent of total sales.”

DSC recently announced the latest example of partnering with clients overseas on dredge construction, with the launch of a pair of Shark class dredges built in Bangladesh. In 2010, DSC delivered its first dredge to Bangladesh, an 18-inch Shark class dredge that offered a 17-meter digging depth. That same year, DSC signed a contract to deliver two 24-inch Marlin class dredges, which featured a submersible dredge pump and hull-mounted booster pump, along with a multipurpose workboat.

“The dredges were the deepest digging dredges in the country and could go down to 23 meters below the surface,” Sinunu said.

In 2016, DSC sold a component package and the drawings for an 18-inch Shark class dredge to a shipyard in Bangladesh. The following year, the same company that had bought the two Marlin dredges in 2010 purchased two 18-inch Shark dredges from DSC. Then, toward the end of 2019, DSC inked a contract with Bangladesh-based Deep Diggers for two 18-inch Shark class dredge component packages, with the dredges to be built at a shipyard in Chattogram. Components like the dredge pump, gearbox, engine, etc., were sent from the United States, while steel fabrication took place at the yard in Bangladesh.

The onset of the COVID-19 pandemic, along with some new import regulations and duties, caused some construction delays for the two dredges for Deep Diggers. Still, both dredges were successfully launched in late 2021.

“I expected some challenges with the first build, but everything went very smoothly,” he said. “We have proved the concept to ourselves and to the local market. We look forward to a very long relationship with Deep Diggers.”

Questions or specific items that came up during construction were addressed by email or Zoom.

“After the dredges were completed and launched, DSC sent a representative for dredge commissioning and startup,” Sinunu said. “We were very pleased with the quality of workmanship. The Deep Diggers team did excellent work.”

This model for the construction and delivery of dredges allows DSC to be nimble in the global market, Sinunu said, which can vary greatly based on funding and needs.

“Right now, the U.S./Canadian market is very hot for dredges, and we have been fortunate to receive many new orders, even with the challenges of COVID,” she said. “Twenty years ago, the hot dredge market was the Persian Gulf, then it was Nigeria, and now Bangladesh. The Bangladesh government is buying dredges in accordance with the Prime Minister’s ‘Delta Plan’ to dredge the rivers and waterways of Bangladesh. The government is also providing the private sector with dredge contract opportunities, which is also moving the dredge market forward.”

Deep Diggers’ new Shark class dredges, which were launched in September 2021, offer DSC’s variable displacement load-sense and variable displacement-closed loop systems—the same as dredges built in the United States. The dredges are powered by a single Caterpillar C32 diesel engine, rated at 1,125 hp., and they offer a 200-hp. cutter drive. The single engine, along with DSC’s hydraulic system, give the dredges a low cost of operation, making them extremely competitive in the Bangladesh market.

“I am extremely proud of the finished product,” said DSC President and CEO Bob Wetta. “With all of the setbacks of COVID in 2020, the Deep Diggers manufacturing team stayed diligent in bringing this dredge to life. We look forward to the future and what it holds for our collaboration.”