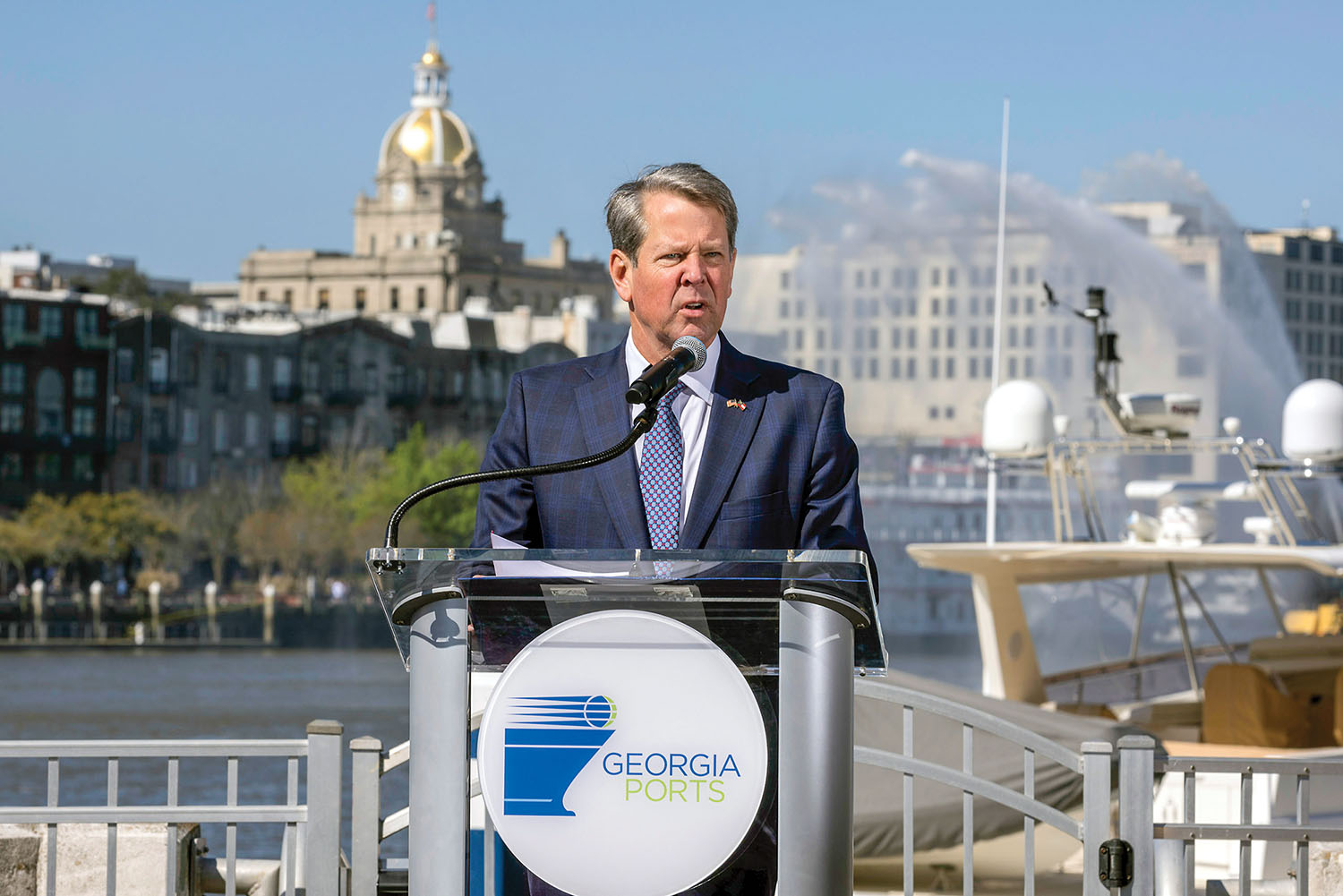 Local, state and federal stakeholders gathered in Savannah, Ga., March 25 to celebrate completion of dredging for the Savannah Harbor Expansion Project, which increased the available draft of the river and harbor from 42 feet to 47 feet.

That available draft swells to 54 feet during high tide.

Speaking to the crowd gathered on the shore of the Savannah River, Joel Wooten, chairman of the Georgia Ports Authority’s executive board, said the completed deepening project means significant growth for a port that’s already on a tear.

That added capacity is particularly significant when placed alongside Georgia’s trade statistics from 2021: more than $166 billion of trade activity, 223 countries and territories served and a record of more than $42 billion in exports.

“I want you to know that, in my book, this achievement is on par with the Braves winning the World Series, as well as Georgia winning the national championship,” said Georgia Gov. Brian Kemp. “It seems only fitting that this once-in-a-generation milestone comes on the heels of already record-breaking trade numbers.”

The Port of Savannah has carried that growth into 2022, with February container volume at 460,413 TEUs, an increase of 69,610 TEUs (or 17.8 percent) over the previous year. The port has seen 19 consecutive months of container volume growth.

To meet that demand, the port’s executive board, at its March 29 meeting, approved a plan to increase cargo capacities at the ports of Brunswick and Savannah. The expansion at Savannah will grow annual capacity from 6 million to 9.5 million TEUs by 2025. The authority also plans to develop another 85 acres, including vehicle processing facilities at the Port of Brunswick. The Colonel’s Island Terminal has an additional 355 acres of land permitted for development.

“In anticipation of the largest ships that will soon make Savannah their port of call, and the enhanced global commerce it will bring to the Peach State, the Georgia Ports Authority has already been hard at work expanding its capacity because the GPA believes, as I do, that we should never rest on our laurels,” Kemp said at the March 25 event. “That same mindset is why both the port system and our entire infrastructure network are viewed as top class. In fact, just this week, Georgia was ranked No. 2 out of the entire country for states with the best infrastructure by the finance outlet Wallet Hub.”

Logistically, the Savannah River deepening will mean less congestion for ships moving in and out of Savannah Harbor.

“For ships that are moving inbound, it will literally be a 52 percent reduction in tidal vessels,” said Griff Lynch, executive director of the Georgia Ports Authority. “For ships moving outbound, it’s a 90 percent reduction. So less vessels waiting, less time and moving more efficiently.”

In other words, with deeper available draft, fewer ships will have to wait on high tide in order to enter or exit the harbor.

The improvement has been a long time coming for Port of Savannah stakeholders. The initial feasibility study for the project was conducted in 1997, and dredging began in earnest in 2015. Moving the project from concept to completion was a team effort, said Col. Joseph Geary, commander of the Savannah Engineer District. Geary singled out state and federally elected officials, Corps team members, dredging contractors, officials with the Georgia Department of Transportation and the Georgia Ports Authority for years of collaboration that finally reached completion in early March.

“It took a team effort, and after a lot of years studying and a lot of years of construction, it got to completion because of that team,” Geary said.

Geary also highlighted the huge return on investment the project will provide.

“For every dollar invested, it’s $7.70 that goes back into the U.S. economy,” he said. “Not just Georgia is successful, but America is successful.”

Geary said the type of partnerships and teamwork that made the harbor deepening a reality is indicative of the climate throughout the state.

“This state has done more, in my mind, to invest in its future, not just in the port, but in the roads and railroads and inland ports, than any state in the nation,” Geary said. “And when I go to D.C. and I talk to the folks up there, that’s what I tell them. ‘This state is doing it right. They’re working together. They’ve got everything moving forward to prosperity.’”

“To all the partners who worked on this endeavor over the years, you know who you are, to those who couldn’t be with us today, and to the partners who didn’t live to see this project to completion but whose memory remains in our minds and hearts—on behalf of all Georgians, I want to thank you all,” Kemp said. “Together, we’ve achieved something transformational, something that will solidify our position as a best state for business for years to come, and something that whole generations of Georgians will benefit from economically and personally.”

The total project cost for deepening Savannah’s harbor was around $970 million, with about half of that going to environmental mitigation projects. Mitigation features include installing a dissolved oxygen system, rerouting the flow of freshwater in the upper harbor and preserving 2,245 acres of freshwater wetlands.

The deepening project also turned up some archaeological and historical treasures. During dredging work, remnants of the CSS Georgia, a Civil War ironclad, were recovered, along with a total of 19 cannons from the mid-1700s. Though a conclusion on the definitive source of the cannons is still forthcoming, they likely came from the HMS Savannah, one of several vessels sunk in September 1779 in an effort to block the French fleet from reaching the city.