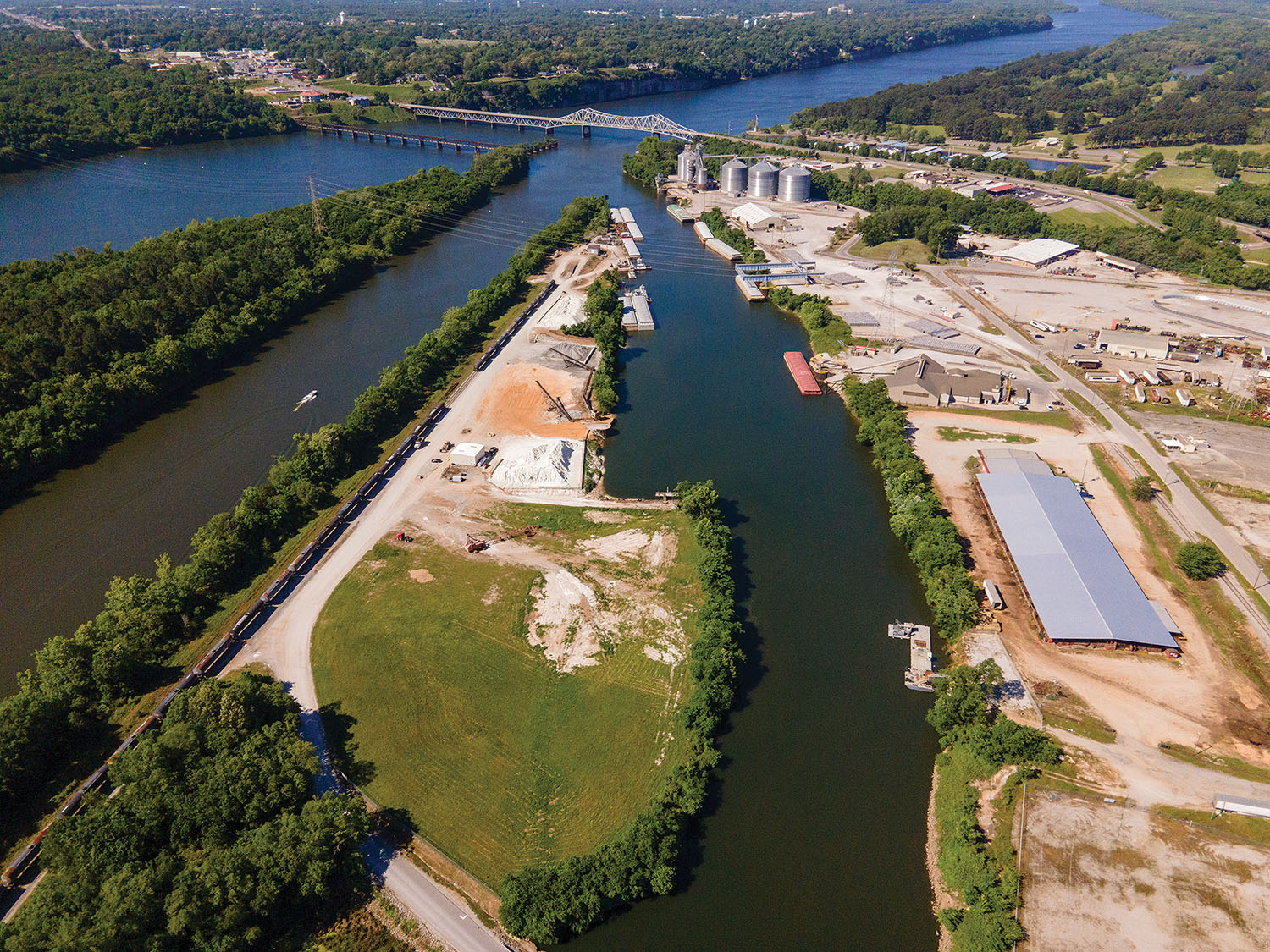 Dredging To Improve Year-Round Access To Florence, Ala., Harbor

The Port of Florence is located in north Alabama on the Tennessee River. Florence is part of the fastest-growing region of the state, with the larger cities of Decatur and Huntsville upriver to the west.

The Florence Lauderdale County Port Authority (FLPA) oversees development and operations at the Port of Florence, a 45-acre intermodal transportation service facility that offers infrastructure and services for the handling of commodities and raw materials between rail, road and the waterway.

“We are a leasehold port located at Mile 256 on the Tennessee River, and we also own infrastructure such as a warehouse, docks and a 40-ton bridge crane,” said Hal Greer, director of the Port of Florence. “All facilities are leased out, and the main terminal is operated by Tennessee Southern Railroad (TSRR). The bridge crane is located at the main terminal. TSRR also provides short-line rail service between the port and CSX mainline located at Columbia, Tenn.”

“There is substantial traffic on the Tennessee River, and north Alabama is an inland river mecca for commerce on the river,” he said. “Decatur, just up the river from Florence, is the busiest inland river port in Alabama. Grain, steel, aluminum, sand and aggregates, fertilizers and many other products either originate or terminate in north Alabama.

“The FLPA is an active transportation hub for waterborne commerce with rail and highway connections that provide unique intermodal opportunities for business and industry in the Shoals region and beyond,” Greer added.

A dredging project is currently underway at the Port of Florence to provide year-round access to the port. The port’s facilities are located on Florence Harbor, an inlet that connects to the Florence Canal, the navigable waterway that bypasses the rocky “Muscle Shoals.”

“The goal of this project is to provide a minimum harbor depth of 10 feet in winter pool to prevent an interruption in service during low-water conditions,” Greer said. “The project is being funded from a $550,000 state of Alabama port infrastructure grant, federal authorized maintenance by the U.S. Army Corps of Engineers in the amount of $528,000, and the balance by the FLPA local match. The FLPA is currently searching for additional funding sources to assist in the $915,150 local share.”

Greer said it’s all part of the effort for the port to achieve its full potential for the inland waterway system and the surrounding community.

“The FLPA still has room for growth and development, and we are currently working with a potential new industry for location at the port that will bring an additional 13 jobs and $12-plus million in investment,” he said. “We work with all our tenant operations in business development, and we feel that the port has the potential to increase capacity to 1-million-plus tons per year in the future. We are also working on infrastructure funding for the rehabilitation of our 200-foot public dock to maximize operational capacity.”

Tenants at the Port of Florence include TSRR, McDaniel Service, AMCOR, Alliance Sand, Alabama Farmer’s Co-op and RMB Marine Service. The port serves the agriculture, manufacturing, metals, concrete, silicone, fertilizer and aggregates industries and also is a base for small dredging projects for customers including Constellium Aluminum, the Alabama Department of Transportation, Marazzi Tile, Mississippi Silicone, concrete manufacturers and farmers in the region. Companies served by the port account for a regional payroll of more than $80 million and 2,000 jobs in the Shoals region.

Florence and the surrounding Shoals region are in a culturally- and historically-rich part of the state. Florence is home to a Frank Lloyd Wright house and the birthplace of W.C. Handy, the father of the Blues. Across the river in Muscle Shoals is the birthplace of Helen Keller and FAME Studios, where music greats like Aretha Franklin, Wilson Pickett, Etta James and the Rolling Stones have all recorded music. The Alabama Music Hall of Fame is also in the area.

Caption for top photo: Aerial view of the Port of Florence, Ala., on the Tennessee River. (Photo courtesy of Florence Lauderdale County Port Authority)