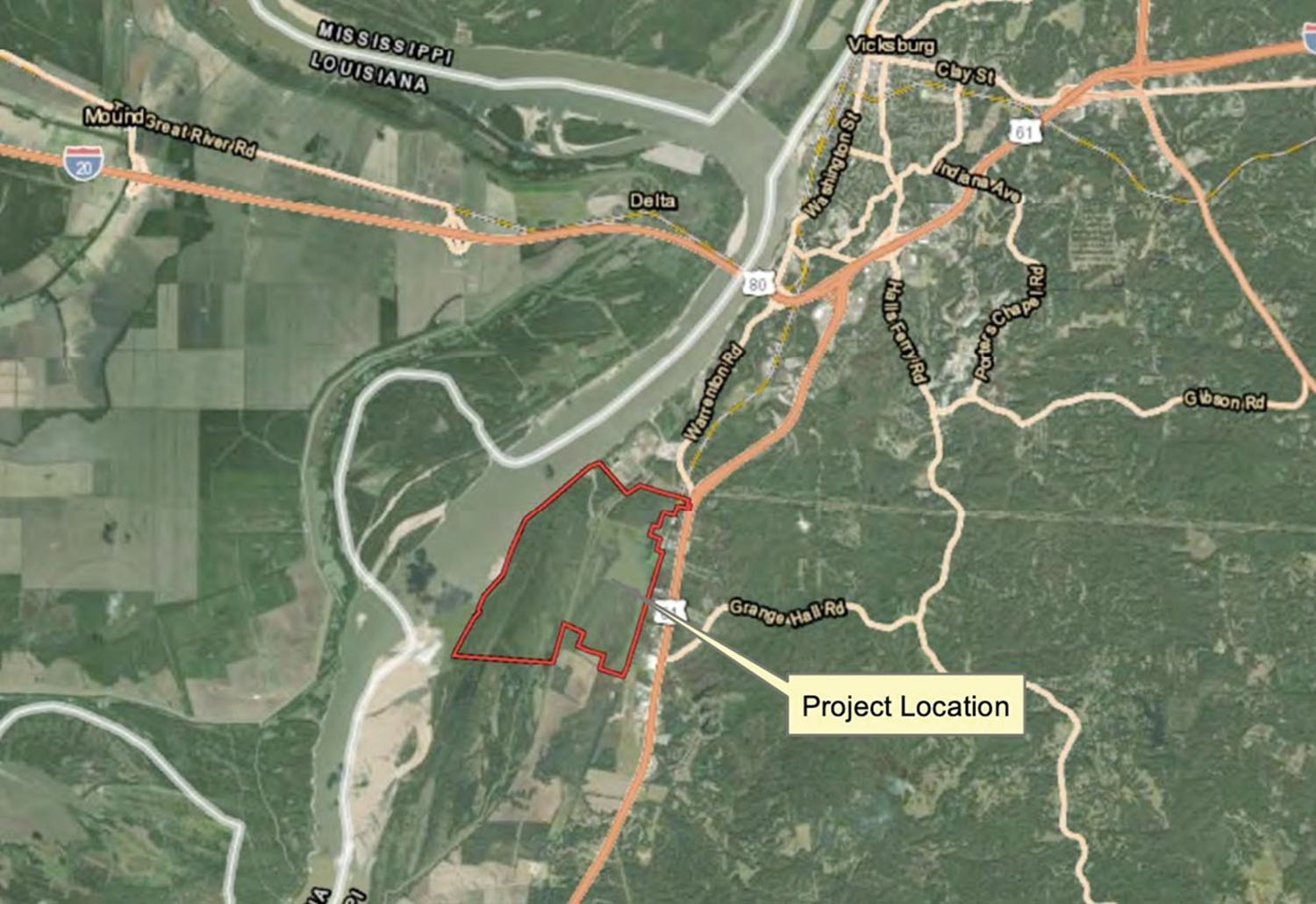 Vicksburg, Miss., is one of the South’s most iconic Mississippi River towns.

Ironically, though, much of Vicksburg was cut off from the Mississippi River in 1876, when the river changed course at Louisiana’s Desoto Peninsula. Ulysses S. Grant’s forces attempted to trigger that course change during the Civil War in order to cut the city off from the river. What Grant was unable to do in 1862 and 1863, nature achieved just 13 years later.

The course change cost Vicksburg its river port and, in turn, led to a drastic downturn in the city’s economy. The city floundered until 1903, when the Yazoo Diversion Canal was completed, thus reconnecting the city to the river.

Now, for the first time in nearly 150 years, Vicksburg is on the cusp of having a port complex physically on the Mississippi River, at a site immediately downriver of Entergy’s Baxter Wilson power plant. The Warren County Port Commission filed a permit application with the U.S. Army Corps of Engineers and the Mississippi Department of Environmental Quality in March.

“The permit looks at the development of roughly a 1,600-acre port complex on the Mississippi that includes the construction of a basin and associated developments,” said Pablo Diaz, president and CEO of the Vicksburg-Warren Economic Development Partnership, an organization charged with economic development in Vicksburg and across Warren County.

The venture is a 50-50 partnership between the city of Vicksburg and Warren County, with those two entities jointly acquiring property for the prospective port complex.

“Well over 50 percent [of the land] is under control,” Diaz said. “We have contracts on a lot of those parcels now, and we’re in the process of closing that. It’s quickly becoming 70 percent, and soon will be 100 percent.”

The city and county have taken steps to acquire a portion of the land via eminent domain.

Diaz would not speak on the legal proceedings. However, he said he hopes the land acquisition phase of the project will wrap up around the time the Corps completes its permit review for the project.

“We are hoping by this fall that we will be finished with that process with the Corps, depending on the questions the Corps might have,” Diaz said.

The first phase of the planned port complex will involve relocating a portion of Hennessey Bayou, building a levee to protect future warehousing and industrial space and infrastructure from high water and dredging a slack-water basin that will connect with the river. Diaz said the basin will allow four-way barge traffic, feature seven or eight docking stations and measure 3,000 feet long and 700 feet wide.

According to the permit application with the Corps, the initial phase of construction will use about 2.25 million cubic yards of material to build a total of 37,000 linear feet of levee.

“The basin will provide safer harbor for maneuvers,” Diaz said.

The first phase will also extend rail service and roadways to the site. Diaz said that connectivity will make the new complex strategic, not only for the Vicksburg area, but for the entire state of Mississippi, especially in light of the merger of the Canadian Pacific and Kansas City Southern railroads.

“The KCS pending merger with the Canadian Pacific railway is fixing to become the first Mexico-United States-Canada railroad in America, which we would be directly connected to at this site,” Diaz said.

The economic analysis the port conducted leading up to the plan highlighted the potential for trade between Mexico, the United States and Canada.

“And that was before it was even known that there was a potential for Canadian Pacific to merge with KCS,” he said. “Now that it is almost a reality, it’s just a very strong case that this would be an attractive option for companies to access those three markets and move products and services from Vicksburg.

“It sells itself,” Diaz added, “from the point of view of location and strategic advantages of transportation and energy.”

The site also has strong connections to electricity and natural gas, further highlighting its strategic advantages.

Diaz said much of the initial market analysis for the new site was initiated pre-COVID, and all the logistics challenges and supply chain disruptions over the past two years have only strengthened the case for a new port complex.

“COVID happened, and everything that our market analysis says went into high gear in terms of the demand,” he said. “Steel mills, activity in all kinds of industrial sectors went into high demand and is still there. Given the geopolitical issues ongoing right now, we continue to see the demand and the potential reshoring of opportunities to America, which should not do anything but increase the attractiveness of our offering when we finish the project.”

Diaz said his team is actively working with the Corps to answer questions as the permitting process unfolds.

“We will be ready to move dirt as soon as we have a permit,” he said.

In the meantime, the Port of Vicksburg’s existing complex along the Yazoo Diversion Canal is busy and at capacity. That harbor covers 422 acres and measures 9,550 feet by 300 feet, with a minimum depth of 12 feet. Commodities handled range from metal, steel, aluminum and ores to wood chips, pellets, paper, chemicals, phosphate and fertilizer, grains, beans and meal.

The port needs room to grow, Diaz said, and it’s an exciting time to be planning for and building a new complex on the river, built from the ground up.

“We are a port city,” Diaz said. “And Vicksburg is small enough that most people realize the importance of being on the Mississippi to our economy. A lot of people are employed at the existing port, so they know it is full and has been full for a while. They know this can open many more economic opportunities for our citizens.”