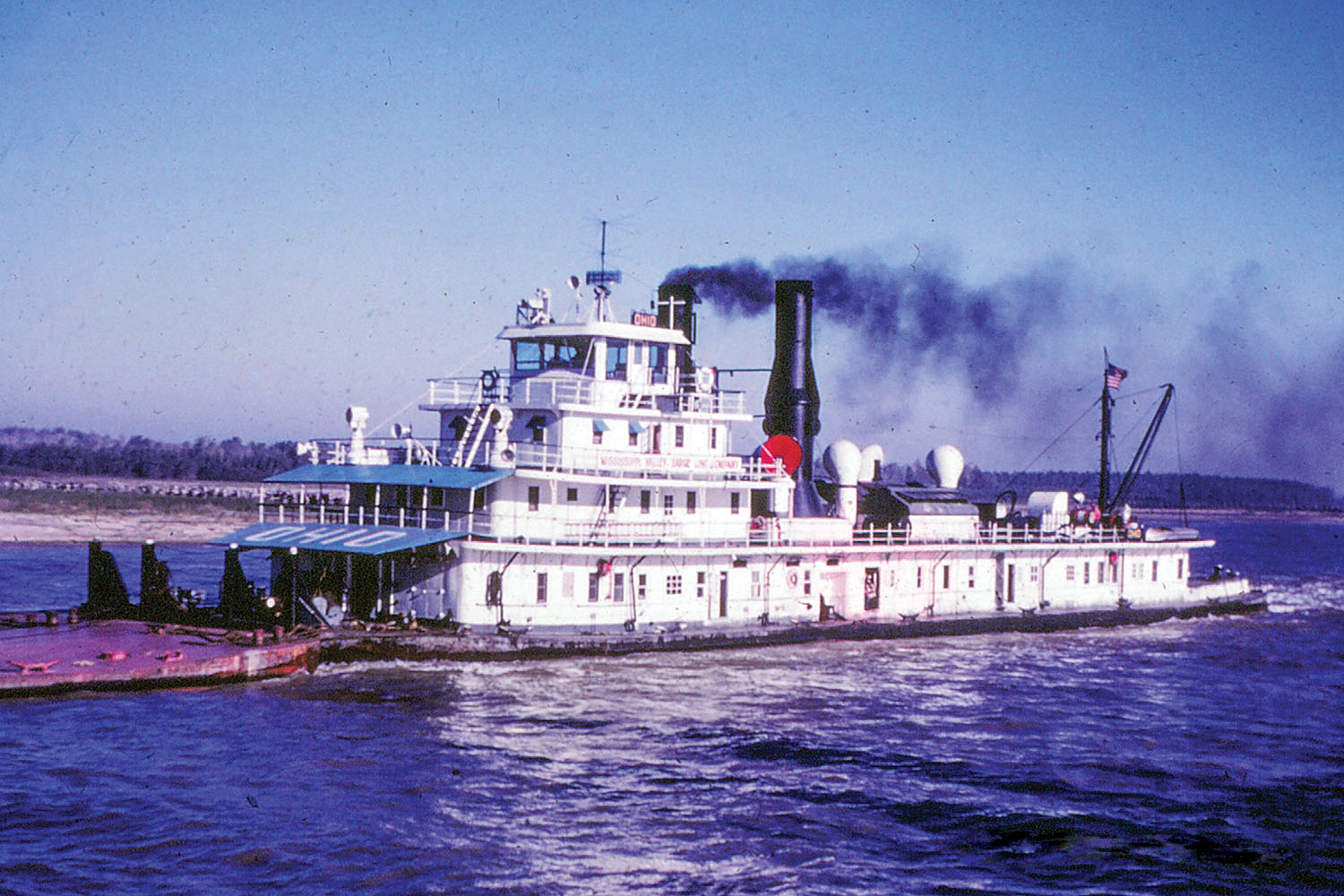 News that Amherst Madison had recently purchased the Michael J. Grainger and would rename it Ohio brings to mind other vessels named Ohio on the inland rivers. Most recently, of course was the one previously owned by Amherst Madison predecessor Madison Coal & Supply, which was originally the Orco of the Ohio River Company, and is now in South America. There were several steam packets named Ohio, as well as some ferries.

In 1930 the fledgling Mississippi Valley Barge Line ordered four large steam prop towboats. These boats were 191 by 40 feet as originally built. Two of them were constructed at the Charles Ward Engineering Works, Charleston, W.Va., were named Indiana and Louisiana and were fitted with steam turbines powering electric drives rated at 2,000 hp. The other two were built by the Dravo Contracting Company at Neville, Island, Pa., and were identical to the Ward boats in hull size and appearance but were powered by Skinner uniflow three-cylinder condensing engines rated at 2,700 hp. These boats were christened Ohio and Tennessee.

The Ohio was the first of the Dravo boats to come out, and the Cincinnati news column of the October 11, 1930, issue of The Waterways Journal reported that it departed the Queen City southbound the week prior on its “maiden voyage” with 17 barges in tow for New Orleans. Capt. William “Billy” Mills was in command of the Ohio. The column also stated that this constituted the first regular tow of the Mississippi Valley Barge Line. On the facing page of the same issue was an ad for the new barge line announcing, “Regular Sailings Starting November 1.”

The four state boats of the Valley Line, as the Mississippi Valley Barge Line came to be known, proved to be very successful in the early days of prop-driven towboats. In the fall of 1941, the Ohio was returned to Dravo for the installation of a new stern section that included kort nozzles. Following this, the hull dimensions had increased to 200 by 40. According to Way’s Steam Towboat Directory, some of the Ohio’s early pilothouse staff included Capts. C.W. Clay, John A. Hottell and Robert Haynes.

The Ohio was retired by the Valley Line and disappeared from the Inland River Record following the 1962 edition. It reappeared in the 1966 edition and was shown as having been rebuilt by Greenville Manufacturing & Machine Works and converted to diesel with the installation of a pair of GM 16-567D engines of 4,300 hp. The appearance had been slightly changed by the addition of a “Greenville style” visor around the pilothouse and the placement of more modern stacks. It was listed as operating for Williamson Marine Transport Company, Greenville, Miss. In 1979, it was transferred to American Boats & Barges Inc., Greenville. The boat was again retired in 1981, and ultimately it became part of a landing facility in the St. Paul, Minn., area.

In all, this Ohio spent 32 years as a steam towboat, all with the Valley Line, then 16 years as a diesel boat after languishing in retirement for three years in between, all without a name change. It has currently served 41 years as a landing boat.

This 92-year-old vanguard of modern towboating began life while packet boats such as the Queen City, Senator Cordill, Betsy Ann and Liberty were in regular operation, and it continues in a useful purpose today.