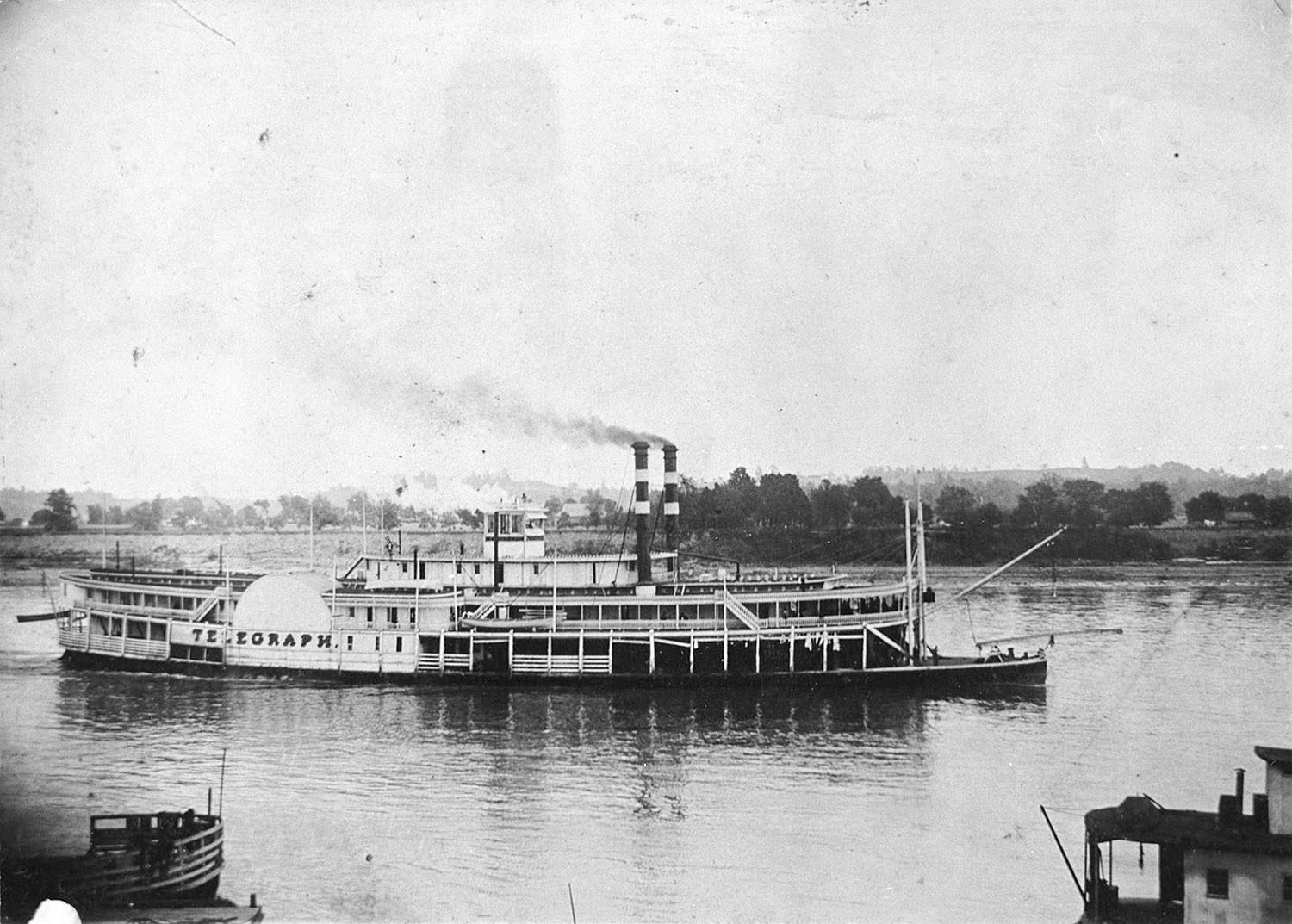 The first, according to Way’s Packet Directory, was built in 1864, before the formation of the White Collar Line, and had the hull constructed by the Cincinnati Marine Ways Company, the cabin added by Horsley & Ealer and the engines built by Niles Iron Works. Capt. Washington “Wash” Honshell was master, as well as an owner. The White Collar Line was established in October 1866, and this boat was included, operating for them until dismantled in 1877. Capt. Honshell served as master of several boats of the company before eventually becoming the general manager.

Another hull was constructed at Cincinnati in 1877 to be named Telegraph, with the cabin of the former boat moved over to it. Way’s speculates that the machinery was also reused. On January 1, 1878, this boat made a fast run between Cincinnati and Pomeroy, Ohio, of 22 hours, 26 minutes on a regular run making all landings. In 1891, this Telegraph was taken to Marietta, Ohio, where it was dismantled at the Knox Boat Yard as a new boat was under construction.

The new and final Telegraph was 292 by 42.4 feet, and it had the engines from the former boat, 22-1/2’s, 8-foot stroke. Way’s lists the first crew as being Capt. William Kirker, master; D.R. Scatterday, first clerk; Carl Crawford, second clerk; Ambrose Dennis and Aaron Williamson, pilots; George Damron, chief engineer with Clarence Hughes, second engineer; Henry Kirker, mate; Theo. Buckles, carpenter; Lloyd P. Gee, steward; and Gus Simmons, barkeeper. In April 1892, the new Telegraph made a run from Cincinnati to Pomeroy in 19 hours, 7 minutes, beating the best time of its predecessor. However, the boat only made one stop at Huntington, W.Va., to put a man off, and didn’t even catch a line in the process.

This boat later left the Cincinnati to Pomeroy trade and began running between Cincinnati and Louisville. On the night of November 22, 1897, the Telegraph had departed Louisville and was upbound above Twelve Mile Island when pilot Capt. Charles Williams relieved the other pilot, Capt. Charles Dufour. For whatever reason, the two men were not on speaking terms, and Dufour left the pilothouse immediately upon being relieved. Before Williams had the opportunity to acquire any night vision, the boat steamed into the rocky Indiana shore near Beigs Landing (present day Mile 588 Ohio River) and was totally wrecked.

Way’s notes that following the subsequent investigation of the incident, the U.S. Inspectors revoked the licenses of both pilots; however, the 1897 Annual Report of the Supervising Inspector General, Steamboat Inspection Service states that Williams was found at fault and had his license suspended for a period of 90 days. The annual report also shows the boat a total loss valued at $60,000, and cargo damage was listed at $500. No injuries or loss of life were noted.

Since 1894, the Telegraph had carried a roof bell previously on the City of Madison. This bell was later placed on the City of Cincinnati, built by Howards in 1899.

Being a pilot myself, this story has haunted me since first reading of it in the S&D Reflector some years ago. With the electronic aids of today such as radar and electronic charting, initial night vision may not be as crucial as it once was, but this incident underscores the importance of pilots exchanging pertinent information by way of regulatory safeguards like Watch Change Protocols, which are in place to guard against accidents such as the one that destroyed the Telegraph.