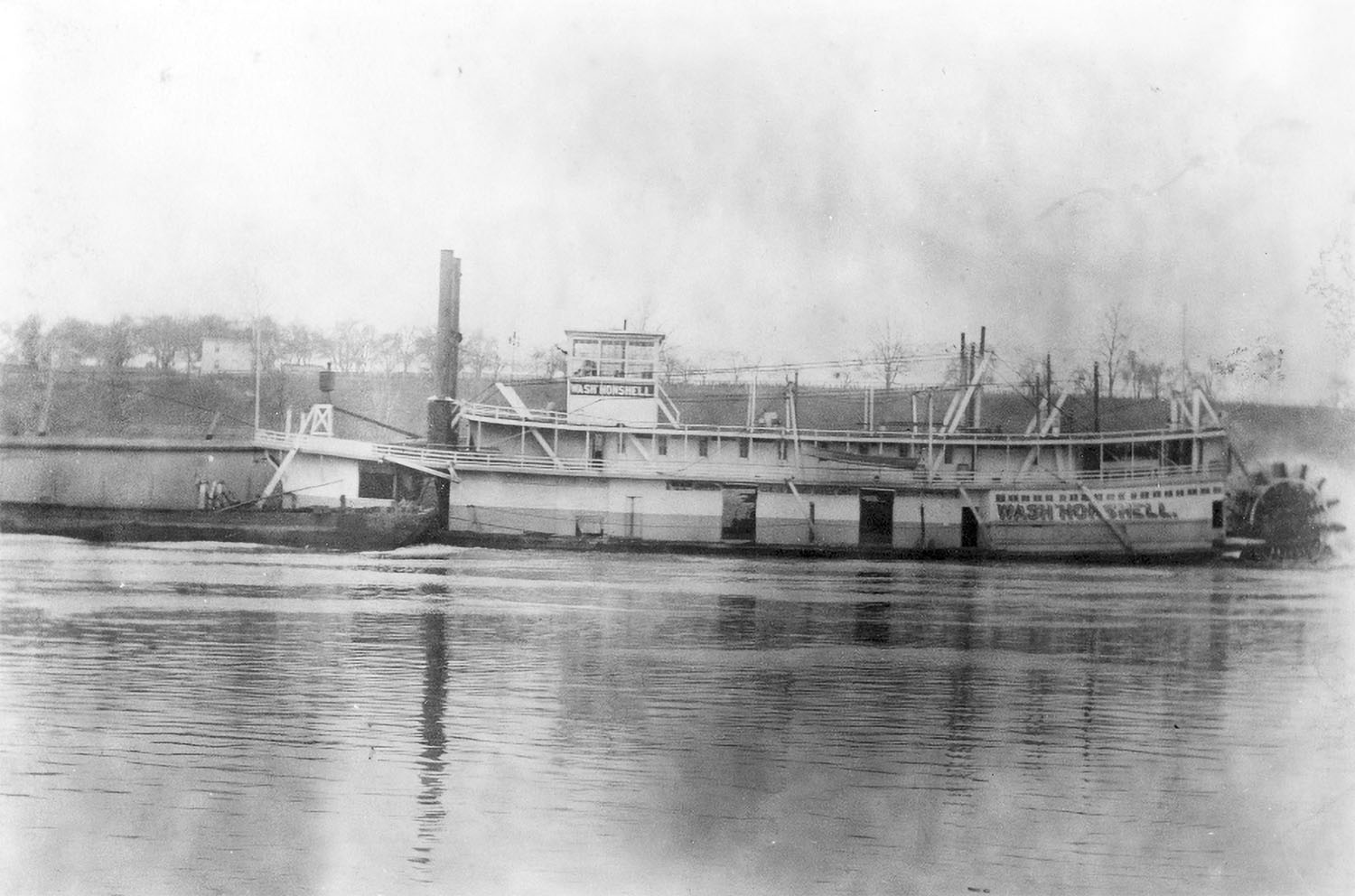 In 1892, the Huntington & St. Louis Towboat Company had a towboat built at Cincinnati that was named Wash Honshell. The hull was 157 by 28 feet, and the engines installed were 14’s with 7-foot stroke. The company was based at Cincinnati and also operated the H.F. Frisbie and Jacob Heatherington.

All three of the company vessels towed extensively on the Upper Mississippi River, with the Honshell on charter to the U.S. Engineer Department there for some time. One of the pilots aboard at times was Capt. Clarence Carter. A navigation light named Clarence Carter has stood for many years on the left descending bank at Mile 708.2 Ohio River, not far above Cloverport, Ky.

The Wash Honshell burned in 1903, and the wreck was sold to the Combine, which had it rebuilt at Elizabeth, Pa., on the Monongahela River. It returned to service in 1904 and was utilized principally on the lower Ohio River. It was returned to Pittsburgh and dismantled in 1914.

The Honshell was named in honor of Capt. Washington Honshell, often referred to as “Commodore.” Capt. Honshell, born in 1824, had started a career on the rivers in the early 1850s, and he was part owner and master of the packet Telegraph when it was built in 1864. He was a principal in the formation of the Cincinnati, Big Sandy & Pomeroy Packet Company in 1866. As mentioned last week, this concern became popularly known as the White Collar Line due to the twin white bands on each smokestack of the company vessels.

Capt. Honshell made his home at Catlettsburg, Ky., and he built an imposing brick house on a hill overlooking the town and river. (The home burned in the 1960s, but the area was still known as Honshell Hill when I was growing up there.) A history of Catlettsburg First Methodist Church (originally Methodist Episcopal Church North) mentions that Honshell arranged for building materials and the bell of the church to be delivered on the Telegraph at no charge when the church was built in 1867. The White Collar Line was closely tied to the fledgling Chesapeake & Ohio Railroad, which originally terminated at Huntington, W.Va., with the White Collar boats connecting the railroad to Cincinnati. Collis P. Huntington, a majority owner of the C&O, and the man for which the city of Huntington was named, was also an investor in the packet line.

Most likely due to the success of this enterprise, Honshell became involved in many other river ventures. In addition to the Huntington & St. Louis Barge Line, he was also involved with the Bay Line, the Portsmouth & Pomeroy Packet Company and, individually, the packets Andes, Buckeye State, Exchange and others. He was also a director of the First National Bank and Belfont Iron Works, both of Ironton, Ohio. When he passed away in 1896, newspaper articles termed him one of the great steamboat men of the Ohio Valley.

Capt. Honshell’s son Gus was involved in both steamboat and railroad dealings and married a niece of Collis P. Huntington. One of Wash Honshell’s daughters, Nannie (Honshell) Kelly Wright became the first (and possibly only) woman iron master. Twice married, she lived in Ironton and became very wealthy, with some articles referring to her as the wealthiest woman in the world after Queen Victoria of England. She passed away in 1946 at the age of 90.