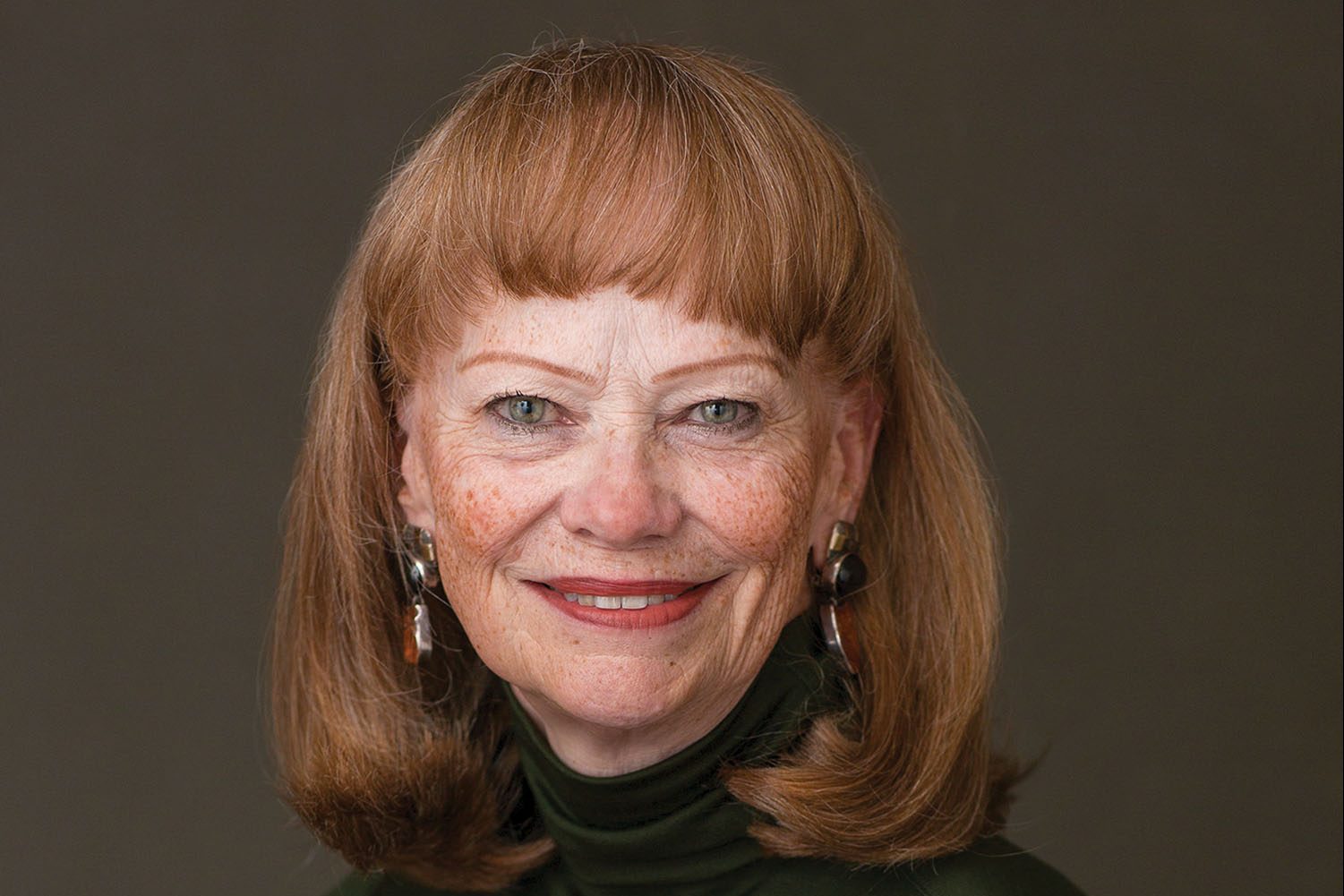 Cheryl “Cherrie” Felder is one of the maritime industry’s most recognized and beloved leaders, especially in the tight-knit New Orleans community where she lives, and it’s been that way for a long time. A 23-year veteran leader at Channel Shipyard, where she now serves as vice president, Felder got her start in the maritime industry with Torco Oil Company in the 1980s. Early on and up to today, Felder has brought an eagerness to learn and build relationships, an attention to detail and an attitude of excellence to the industry, which is also reflected in her place on many advisory boards and trade associations.

In recognition of all that, Felder received the IMX Achievement Award at this year’s Inland Marine Expo, held in St. Louis May 23–25.

Felder, a native of Summit, Miss., grew up on her family’s farm and studied African art at Vanderbilt University in Nashville, Tenn.

“When I got out of school, I worked for the New Orleans Museum of Art in City Park, and I was cataloging their African art collection,” Felder said. “While I was working at the museum—I’d been there a few years, I guess—there was a group of businessmen, doctors and lawyers, here in New Orleans that decided it would be fun to promote a professional rodeo.”

The rodeo developers held a press party at the museum to promote the event, and Felder, who attended as a museum employee, volunteered to help with the first rodeo. After that first year, one of the rodeo promoters asked her to consider being the executive director of the rodeo committee.

“I ended up doing that, so for the next couple of years I was the executive director of the rodeo and pretty much put it all together, because our board of directors were guys that ran businesses, not just in New Orleans but all over the place,” Felder said.

The New Orleans Rodeo was held for two more years, culminating in the 1983 event.

“As you can imagine, New Orleans is not a rodeo town, so after the third year of the rodeo, we said ‘no more rodeo in New Orleans,’” Felder said.

The chairman of the rodeo committee that year was Dennis Steger, who at the time ran Lower Mississippi Marine Service, a brokerage company, and who now, along with his sons, owns and operates Channel Shipyard.

“He talked to some friends of his who were leaving Ingram Barge to move to New Orleans to open a marine division for Torco Oil Company, and he called and said, ‘Look, you’ve got to hire this girl. She’s a hard worker. We need her in the industry,’” Felder said. “They did, and I went to work for Torco Oil Company.”

Felder was working in downtown New Orleans for Torco, fielding calls from boat crews in need of orders, crew changes or groceries. A nighttime call from a captain building tow on the river early in her time at Torco would leave a lasting impression on Felder’s career and her connection to mariners at work on the waterways.

“One night, the captain on one of our boats was building his northbound tow,” Felder said. “He called me about 2 and said, ‘Are you busy?’ I said, ‘Well, no, I was sleeping.’ He said, ‘Well, you may want to come out here.’ The poor fella was trying to put his tow together.

“To me, a barge was a barge,” she said. “I’d call people and say, ‘I need a barge,’ and they’d say, ‘OK.’ I had loads and empties and tank barges and hopper barges and lash barges, and he was trying to put all that together. He spent the next four and a half hours walking that tow with me, explaining how it all works. I can remember it like yesterday.”

The story of Felder building tow that morning was one of the first accounts Frank Morton, founder of Turn Services in New Orleans and board director of America’s Watershed Initiative, shared to explain why he nominated her for the IMX Achievement Award.

“She went out there and spent the day with the guy, and she learned a lot about it,” Morton said. “She learned from it and utilized it in her work, and I think the people who worked with her really appreciated that. She has a lot of respect for the vessel personnel, their abilities and their attitude, and I think that’s one of the reasons she began her advocacy work, because she felt like those people need more of a voice.”

When the rest of the Torco staff moved to town, it wasn’t long before Felder’s boss overheard her on the phone, voicing her enthusiasm for the industry she was getting to know.

“He said, ‘Man, you’re really into this,’ and I said, ‘I think it’s grand,’” Felder said. “I actually got to ride on boats for a couple years on and off, and I’d spend hours in the wheelhouse and out on the deck and in the engineroom just learning how it all works. I was always made to feel welcome because I respect what these folks do. I just had an opportunity that most people, especially a woman, don’t get. And then our sales VP started taking me to call on all of our oil customers.

“It just blossomed from there, and it’s been a fabulous, fabulous career,” she added. “I can’t imagine doing anything else. Absolutely not. And it all started with a degree in African art. Each thing was important, but boy, it was absolute serendipity that I ended up in the maritime industry, and it has been a total gift. It’s so important. It matters so much to so many people—and to the country—and to be a part of that and try to make a difference to advocate for this industry is truly a gift.”

Over the years, Felder has served on numerous advisory boards and industry associations, including American Waterways Operators (AWO), Waterways Council Inc., the Greater New Orleans Barge Fleeting Association (where she was president from 1993 to 1995), the Shipbuilders Council of America, the National Waterways Foundation (where she is a trustee), and the Louisiana Associations of Waterway Operators and Shipyards, just to name a few.

“One of the things that means a lot to me and is a very fulfilling part of what I do is serving as treasurer of the Coast Guard Foundation,” Felder said. “We raise money to help the men and women of the Coast Guard with things that are not included in the appropriated budget. Scholarships, we build playgrounds, we take care of families if a family member is lost in the line of duty—there are so many things we do.”

In that role, Felder gets to travel to meet members of the Coast Guard serving at bases, stations and aboard Coast Guard cutters.

“It’s just so rewarding, and it’s such a great organization to be a part of,” Felder said. “We have board members from all over the country. To get to know those people, to learn a lot about how other people look at waterways and what it means to them, and to help educate some folks who may not know much about it has been a great thing.”

Next Generation Of Leaders

Felder said she’s happy to see more and more women active in the industry, and she attributed that growth, in part, to organizations like WIMOs (Women in Maritime Operations) and WISTA (Women’s International Shipping and Trading Association). She also mentioned ADMIRALTY, a group focused on young leaders in the maritime industry, and the 40 Under 40 awards at IMX as helping to engage the next generation of maritime leaders.

“It’s really been exciting to see a lot of these organizations come about,” Felder said. “I want everyone to love this industry like I do. I don’t know that’s ever going to be the case necessarily, because it’s changed somewhat. But I’m so excited to see so many young people.”

Besides seeing more women in the industry today, Felder said one thing that’s changed over the years is a heightened attention to rules. On the one hand, regulations like Subchapter M, and the communication and development that went into it over many years, highlight some of the best aspects of the maritime industry, in particular the willingness of competitors to work together for the benefit of the entire industry to promote safety. The same folks also work tirelessly to ensure that the nation’s waterways will continue to be the best way to move commerce. At the same time, though, that heightened attention to rules and legal concerns has coincided with a waning of some of the camaraderie that defined the industry for so long.

It was also more commonplace at that time for contracts or deals to be worked out verbally and sealed with a handshake, Felder said.

“Now, everything has to be looked at by the lawyers and insurance companies before you can touch a barge,” she said. “It’s not for me to say whether that’s good or bad, but I think it’s just more formal now and not as laid back.”

Still, Felder said she’s never loved what she does more, and she has no plans to stop doing it.

“When do I plan to retire?” she said. “I don’t. I’ll work as long as the Steger boys will have me, because I enjoy what I do, I believe it’s important that this work gets done, and I feel like it’s a gift for me to get to do it.”

That’s something that Felder’s friends and colleagues universally celebrate.

“There is truly no other more selfless leader for the inland waterways than Cherrie Felder,” said Deb Calhoun, senior vice president of Waterways Council Inc. “She has been at the top of every important maritime trade organization—Waterways Council Inc., GICA, AWO, WISTA, Coast Guard Foundation and so many others—putting in her time, sharing her meaningful thoughts, strategically leading us forward, and always making us better. She was a true mentor to me back in the 1990s (and to this day!), when she was one of the very few women in the room and at the table, and she captivated that room with her intelligence, her experience, her knowledge and her perfect wit.

“She has the utmost respect of every single person in the marine industry today (and yesterday/yester-year too!),” Calhoun added. “There is no better choice for IMX 2022’s achievement award because, simply put, it is Cherrie who has worked the hardest throughout her career to strengthen this industry and lay the groundwork and a path forward for leaders of tomorrow.”

Morton presented Felder with the IMX Achievement Award during the “Industry Proud” closing session of the trade show, held May 25.