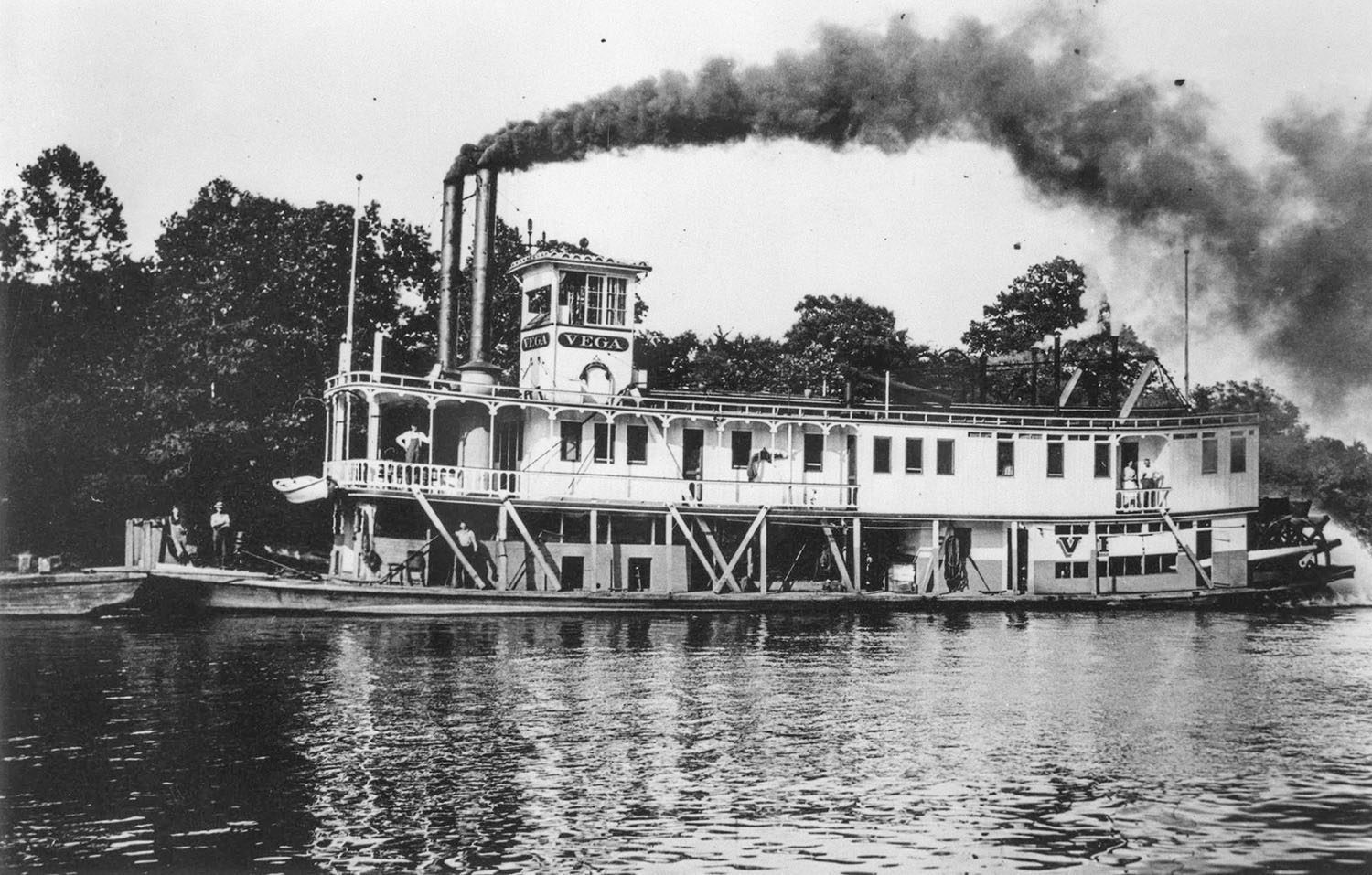 There have been any number of formulas and theories as to the proper ratio between length and width of boat hulls.

In 1901, the Howards built a steam sternwheel towboat for the U.S. Engineer Department at their Jeffersonville, Ind., shipyard that was extremely narrow in relation to the length and height. This boat was named Vega and had been designed for use on the Muskingum River, taking up only half the width of that stream’s small locks while allowing an equally narrow barge to fit alongside.

The wooden hull of the Vega (which was the second of that name on the Muskingum for the Engineer Department) was 104 feet in length and 17 feet wide, measuring 118.6 by 17.4 overall. Atop this was placed two full decks surmounted by a tall pilothouse. While drafting only 2.5 feet, the air draft to the top of the stacks was 39 feet above the surface. The floor of the pilothouse was 23 feet above the water level. This all resulted in a vessel that appeared to be very top heavy.

The Vega worked in the Muskingum for the Engineers for the next 17 years, towing and tending equipment engaged in channel maintenance and dredging of lock canals. Throughout this time there were no recorded incidents of any accidents or even close calls due to the narrow width, even though as stated by J. Mack Gamble in his Steamboats on the Muskingum, when the Vega was built “it was freely predicted that she would turn over.”

In March 1918, the boat was sold at a public sale to steamboat broker John F. Klein. Following this sale, the work of the Engineer Department on the Muskingum was continued by the larger steamer Merrill, which had been working there since it was built by Howards in 1907. When the Merrill in turn was sold at a public sale to Capt. C.C. Stone in 1931, the Muskingum maintenance work was performed by the diesel sternwheelers Nemacolin, built by Dravo in 1929, and the Fort Armstrong, which had been built by Ward in 1930.

The Vega was taken to Pittsburgh and rebuilt with the pilothouse set down forward of the cabin in order to reduce the height. It was then considered to be “pool-style,” as many towboats working in the Pittsburgh lock pools were constructed in this configuration to aid in transiting low bridges. Klein in turn sold the boat to Capt. Elisha Woods of Cairo, Ill., who renamed it Elisha Woods. In 1921 the boat was transferred to the Woods Bros. Construction Company, Omaha, Neb., who utilized it in construction work on the Missouri River.

On October 26, 1926, the Woods was hit by a sudden wind squall and overturned in Jackson Bend on the Missouri. Some accounts say near Atchison, Kan., or “Atherson, Kan.” Jackson’s Bend is actually about 20 miles below Kansas City, and abreast of Atherton, Mo. Missouri River expert Capt. Dave Dewey helped confirm this by digging up a 1924 navigation map for the area.

The cook and cook’s helper were both lost in this accident. Mentioning this capsizing in his book, Gamble writes “And eventually the former Vega fulfilled the evil prophecies which had been made about her.” The U.S. Engineer Department snagboat Missouri was nearby and began removing the wreck of the Woods that same day.

Capt. Elisha Woods, for whom the boat was named, was born in Henry County, Ky., in 1874. A tall, husky man, he was nicknamed “Country” in his youth. He went to work for Capt. Oscar F. Barrett on the Kentucky River in 1887 and went on to celebrate 50 years service with the Barrett Line, according to an article in the September 11, 1937, issue of The Waterways Journal. In 1920, Capt. Woods had been named operating manager of the extensive Barrett interests at Cairo, Ill.

In 1946, one of the first vessels to be constructed by the Nashville Bridge Company following World War II was a diesel towboat named Elisha Woods, which then ran for some 53 years under that name for several owners before being retired.

Also in his honor, for many years the Elisha Woods navigation light and daymark marked Cairo Point at the mouth of the Ohio River. Capt. Woods passed away in 1957, and he is buried in Spencer Heights Cemetery, Mounds, Ill., not far from Cairo.