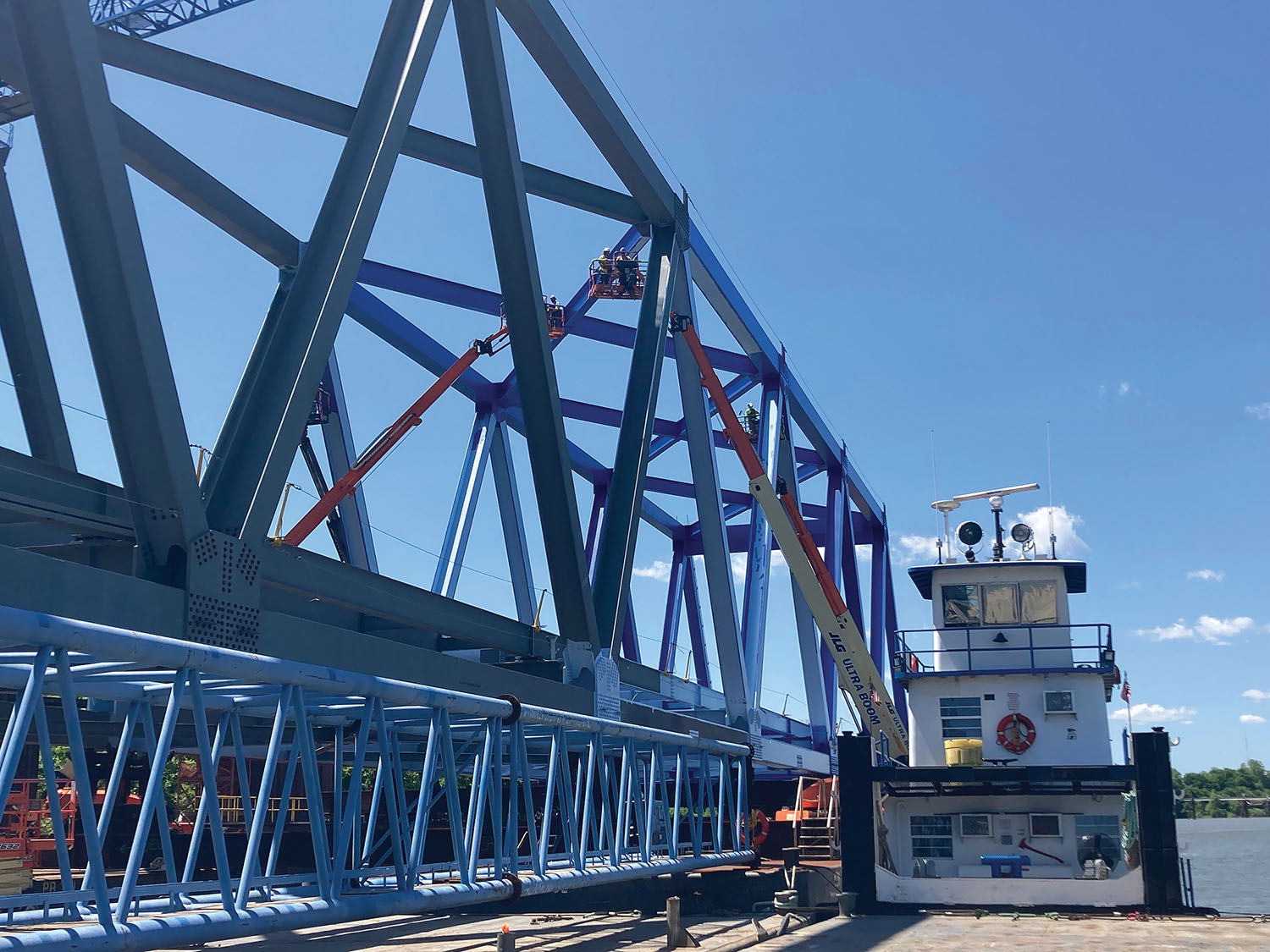 Construction Of New Cumberland River Bridge Remains Ahead Of Schedule

Construction of a new bridge over the Cumberland River at Smithland, Ky., remains significantly ahead of schedule, according to the Kentucky Transportation Cabinet (KYTC).

The contractor resumed roadway work at the U.S. 60/Ky. 70 intersection on the south approach on May 19.

KYTC District 1 Chief Engineer Kyle Poat said while there were some delays due to floodwaters during the fall and winter, the project appears to be approximately two months ahead of schedule.

“The project is progressing at a great pace with the recent completion of the south main pier and placement of beams this week for span 3 on the south approach,” Poat said.

The contractor also poured concrete May 16 on the north main pier, the final pier remaining to be completed.

Scott Swamback, project manager for American Bridge Company, the contractor for the 700-foot steel truss for the main span, said the truss assembly was completed in late February, with bolting accomplished in early spring. Painting is now 30-40 percent completed, he said.

“We’re still right on schedule and will be ready to float it in once the piers are ready,” he said.

The contract calls for that to take place in September, once concrete has cured sufficiently, he said.

Swamback said crews will begin setting lift towers in July in preparation to float the span down the Tennessee river to the Ohio, and then upriver to the Cumberland River worksite in Smithland. It will then be jacked into place.

“We anticipate that it will take about six to eight months to pour a concrete deck on the main span to prepare it for traffic in late spring of 2023,” Poat said.

Jim Smith Contracting of Grand Rivers is the prime contractor on the $63.6 million project. The new, 1,912-foot structure is being erected immediately downstream from the existing bridge.

The contractor and Kentucky Transportation Cabinet engineers have established an updated work schedule for the project that calls for the final south approach section beams to be set in July, the main truss float-in in September, the deck concrete on the main span to be poured between October and December and the highway connections to U.S. 60 to be tied in, traffic moved to the new bridge and the old bridge to be demolished between April and June 2023. Final roadway surfacing and finish work will then take place, with a target completion of the entire project on December 1, 2023.

The new bridge has a truss design similar to the U.S. 60 bridge over the Tennessee River erected a few years ago at Ledbetter. The new bridge will have a 40-foot-wide, two-lane deck with 12-foot driving lanes and 6-foot shoulders, providing ample clearance for most farm equipment to cross without stopping oncoming traffic.

To aid river navigation on the Cumberland River, the new bridge will have no piers in the water during normal river conditions. River pilots tested bridge alignments and pier placements during extensive testing using the simulators at Seamen’s Church Institute’s Center for Maritime Education in Paducah, Ky.

The existing U.S. 60 Cumberland River Bridge at Smithland, also known as the Lucy Jefferson Lewis Memorial Bridge and the Smithland Bridge, is 1,817 feet long and was opened to traffic in 1931.

Caption for photo: Assembly of the 700-foot steel truss for the main span of the new Cumberland River Bridge at Smithland, Ky., was completed in late February, and painting is now 30-40 percent completed. (Photo by Martina Britts, American Bridge Company)