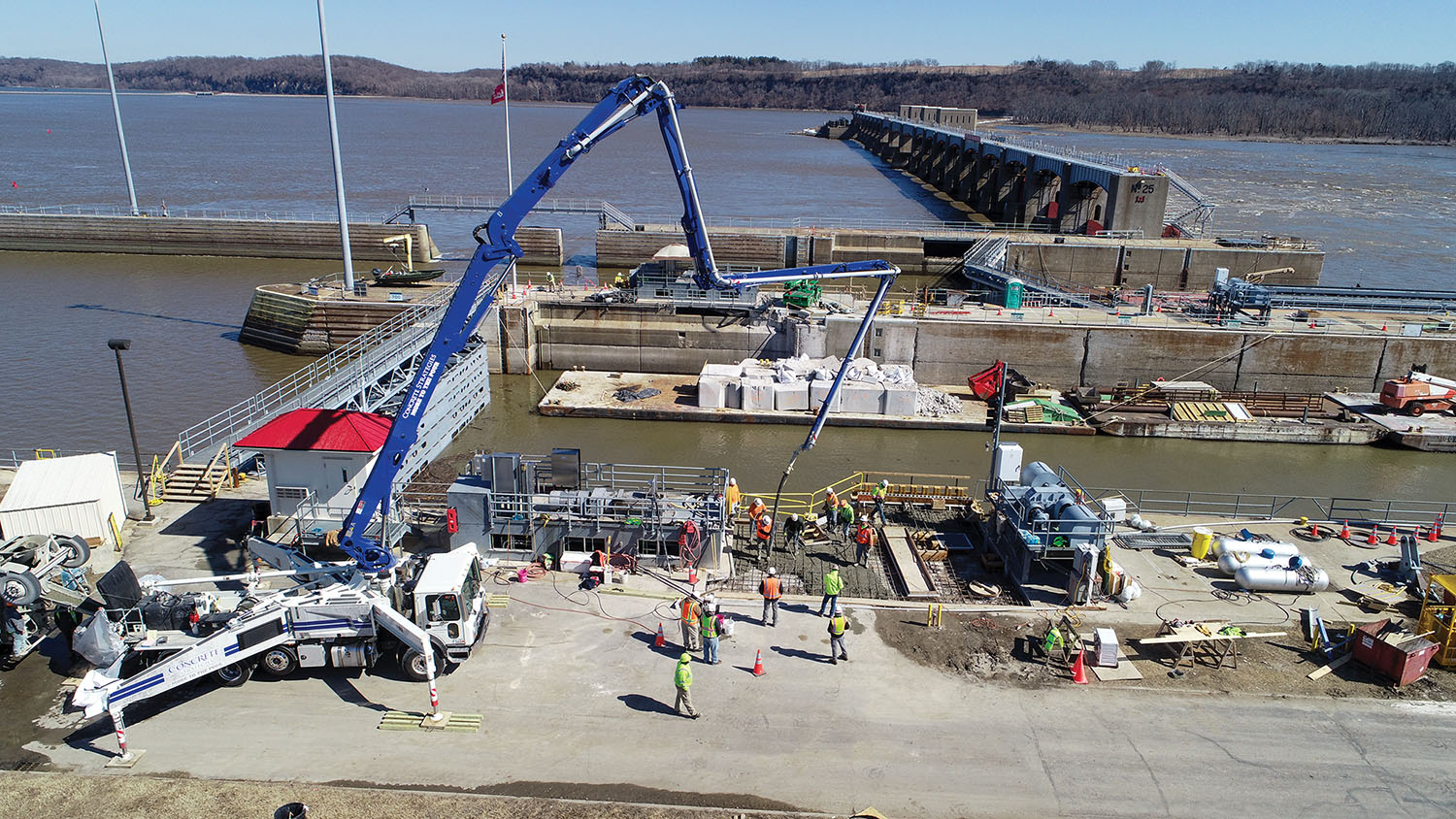 Massman Construction Company has won the prestigious Build America award given by the Associated General Contractors of America for its rehab work on Locks 24 and 25 on the Mississippi River. The Build America awards, which are nationwide, are regarded as the top civil engineering awards in the nation.

As Massman explained in its application documentation, Lock and Dam 24 (Clarksville, Mo.) and Lock and Dam 25 (Winfield, Mo.) are two of the most heavily used facilities on the Mississippi River. Owned and operated by the St. Louis Engineer District, these structures are critical components of a system that ensures consistent navigability and access along the river between the Gulf Coast and Minnesota. Despite having opened more than 80 years ago and being listed on the National Register of Historic Places, both structures remain in operation. Due to their advanced age, the locks require complex rehabilitations, of which the anchorage replacement is one of the most significant.

Massman replaced the existing anchorages (large hinges for the miter gate leaves) with newly fabricated hydraulic steel structures. Massman installed 114-foot-wide bulkheads across the lock chamber to allow for the removal of the upper miter gates. The concrete around the embedded anchorages was removed utilizing specialized diamond wire saws, working 24/7 to surgically cut concrete blocks from the lock walls to allow for the full replacement of 12 anchorages and the partial replacement of four.

The project also rehabilitated a portion of the locks’ electrical systems and allowed for the installation of new geotechnical instrumentation. Massman used sub-contractors for the wire-saw cutting and diving. At its peak in spring 2020, the project employed about 50 people, said Massman. It used two large cranes—a Manitowoc 7000 and a smaller Manitowoc 21000 ring crane—to move bulkheads and miter gates. Smaller cranes did day-to-day support work.

The work was done within a tight window during two multi-month river closures that were scheduled during winter to mitigate the impact of the complete shutdown to river users.

The project ran into unforeseen difficulties when “the team … encountered a significant amount of damage to a critical component of Lock 25 that posed an existential threat to the project’s viability,” according to the company. “Rather than allowing this to derail the project, Massman rose to the challenge, working with USACE to rapidly mobilize additional resources and finalize a plan to repair the damage. This emergency repair was a significant undertaking in its own right; in the past, bulkhead reconstruction or installation has been procured as a standalone contract due to the specialized nature of the work and its importance to the function of the overall lock complex.”

All this work was taking place at the height of restrictions due to COVID-19. Project manager Michael Massman said workers on the project were issued special passes stating they were on crucial government work during a time when there was some concern that state troopers might be questioning some motorists and restricting movements. While that concern proved less than anticipated, “the team managed the COVID-19 pandemic’s impact so it had no effect on the schedule. Despite having concluded Season 1 as the country was entering the pandemic and shutting down and performing Season 2 during the worst of the winter surge, Massman’s proactive and thorough COVID-19 protocols ensured that no time was lost or individuals sickened on site; a critical accomplishment on a project when a multi-week illness or even quarantine could have wreaked havoc on the project schedule.”

Massman has long been a specialist in lock and dam rehab work. “We see ourselves as having a three-legged stool” said Michael Massman. “Bridges, dock work, and heavy civil engineering, which includes lock and dam rehab and repair. Of course, there’s not a lot of new lock and dam construction happening; the locks and dams we work on often go back to the 1930s.”

Massman also participated in much of the $1.9 billion in levee and dike construction and repair work contracted by the Corps of Engineers to protect New Orleans in the aftermath of Hurricane Katrina, which proved its worth during Hurricane Ida.

Michael Massman welcomes the wave of infrastructure funding passed in recent bills including the Infrastructure Investment and Jobs Act but warns that it follows decades of underinvestment. The recent funding, though, “could see a wave of [infrastructure] enhancement that has benefits for everyday Americans for years to come.”

The Build America award is the third major award win in the past three years and the 10th win overall for Massman. In 2021, Massman Construction won the AGC’s Grand Award for the Louisiana, Mo., Champ Clark Mississippi River Bridge replacement, which the AGC also named the most significant construction project of 2020.