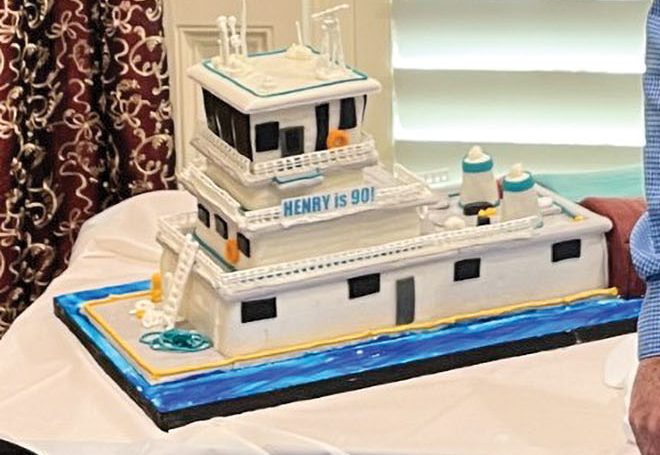 Capt. Henry Elliott celebrated his 90th birthday last month with a surprise party that included a cake shaped like a towboat.

Family members knew just what cake to order for his party, as the retired towboat captain worked on the river starting at age 12 in 1944 and has even written a book about his time on the river.

“It looked great!” Elliott said of the cake, and then talked about the surprise party with 50 guests. “It was just so surprising, you know. It was just wonderful.”

Kool Kakes by Dillon designed the cake. The towboat was German chocolate on the inside and pushed barges made of red velvet.

Elliott, of Tyler, Texas, started his career on the river decking in the Houston Harbor for his older brother.

“That’s where I got my first tugboat experience,” he said. “It was during the war, and there were no men, so the kids had to take up the slack.”

Two of his brothers also worked on boats, and Elliott thought it would make a good career.

“It was challenging work, and I liked that time off, and I liked working on the boats, so I just took the ball and ran with it,” he said.

Elliott put his career on hold to go into the Air Force July 19, 1949. He spent time overseas in England and Wales, at times driving a mail truck, at other times doing electrical work or working on the telephone system. Still, he knew exactly what he wanted to do when he was discharged.

Very quickly, he said, he set his sights on the wheelhouse.

In January 1953 an older captain told him how he could get in the pilothouse on a regular basis with a year or less of experience.

“It was a lot of work,” he said. “I lost a lot of sleep, which I didn’t mind because I was never much of a sleeper. I did everything I could do to try to help me get to where I wanted to go. On August 8, 1953, I stood my first pilothouse watch. December 22, 1953, I had my first relief captain job on the intracoastal canal.”

The first boat he captained was J.S. Gissel & Company’s tug the San Bernard.

Elliott started work on the inland river system in 1955. The first towboat he captained on the river was the mv. Bayou Teche.

“I wanted to learn the river because it was really challenging,” Elliott said. “Back in those years the river was constantly changing, the lower river, Cairo down to Baton Rouge.”

Elliott said he could name 20 places where the river had changed its course over the years. He also remembers when the dikes along the rivers were made of wood pilings instead of rocks.

“The port captain was told I wanted to learn every river I could. He took me at my word,” Elliott said. “First the Ohio, then the Illinois, then Lower and Upper Mississippi. I just kept adding different rivers. I ended my career with about 7,000 miles I had piloted: rivers, canals, bayous, and Lake Michigan.”

During all that time, Elliott kept a little book with him. Back in 1953, he was among crew members on a boat who witnessed an accident. After court, the company lawyer told him to get a book and start making notes.

The notes included conversations he heard, reports about places on the river where there had nearly been an accident, groundings, locks that were hard to make, accidents, people he liked to work with and people he didn’t. They became the basis of a book he wrote and self-published in 2015, at the age of 83, “Tows, Locks and Gator Crossings: Stories and Experiences of a Mississippi River Captain.” The book is available for purchase online at amazon.com or at barnesandnoble.com.

Elliott said he wrote the book, initially, for his children, “to see how the beans got put on the table.”

It also chronicled the many changes in life aboard a towboat over the years.

There wasn’t much in towboat technology in those early days.

Even the radio had only one channel.

To make a telephone call, the crew had to go through the marine officer in Memphis, St. Louis or Galveston, “when you could get them.”

“Everybody could hear your conversation,” he said.

When crew members wanted to make a more personal call, they waited until they got to a lock, scaled the lock wall and made a call from a pay phone.

Elliott worked for roughly 20 companies over his career, mostly doing trip work, he said. He liked the variety of the jobs and would switch things up, sometimes even taking a job as a deckhand for a change of view.

“During those years I have worked on about 100 boats from a 65 hp. tug to 7,500 hp. river boat, from a small barge to 30 loaded barges southbound on the Lower [Mississippi] River.”

The companies he worked for the most were Houston Barge Line and Graver Towing. He also spent about 18 months as co-owner of a small towing business with his brother in the late 1960s and early 1970s.

“Back then, captains did their own hiring,” he said. “When we needed a deckhand, we would call the boat store. They would go up there and shake the bushes and bring a deckhand out to me. Some of them worked out, and some of them didn’t.”

Elliott retired in 1985. Since then, he has spent a lot of time with his wife, Dianne, with whom he celebrated 55 years of marriage on May 5, as well as their children and grandchildren. They have spent time camping, fishing, raising gardens and, when the children were smaller, riding go karts.

While he and Dianne still like to travel and go for long drives—300 miles on a recent weekend—these days Elliott spends most of his time at the computer, where he is writing a second book, this time about his life story and time off the river.

Still, when he thinks back, it’s his time on the river that he particularly enjoyed.

“I just had a good life out there,” he said. “Of course, being away from home was bad, but other than that I really enjoyed it. I liked having to use my nerves and the pressure. I just didn’t worry about anything. I’d just let her go.” He chuckled, then said, “Between that and staying busy, me and my artificial parts have made it to 90 years old. I’ve enjoyed life. I’m going to enjoy life whether anybody else does or not.”