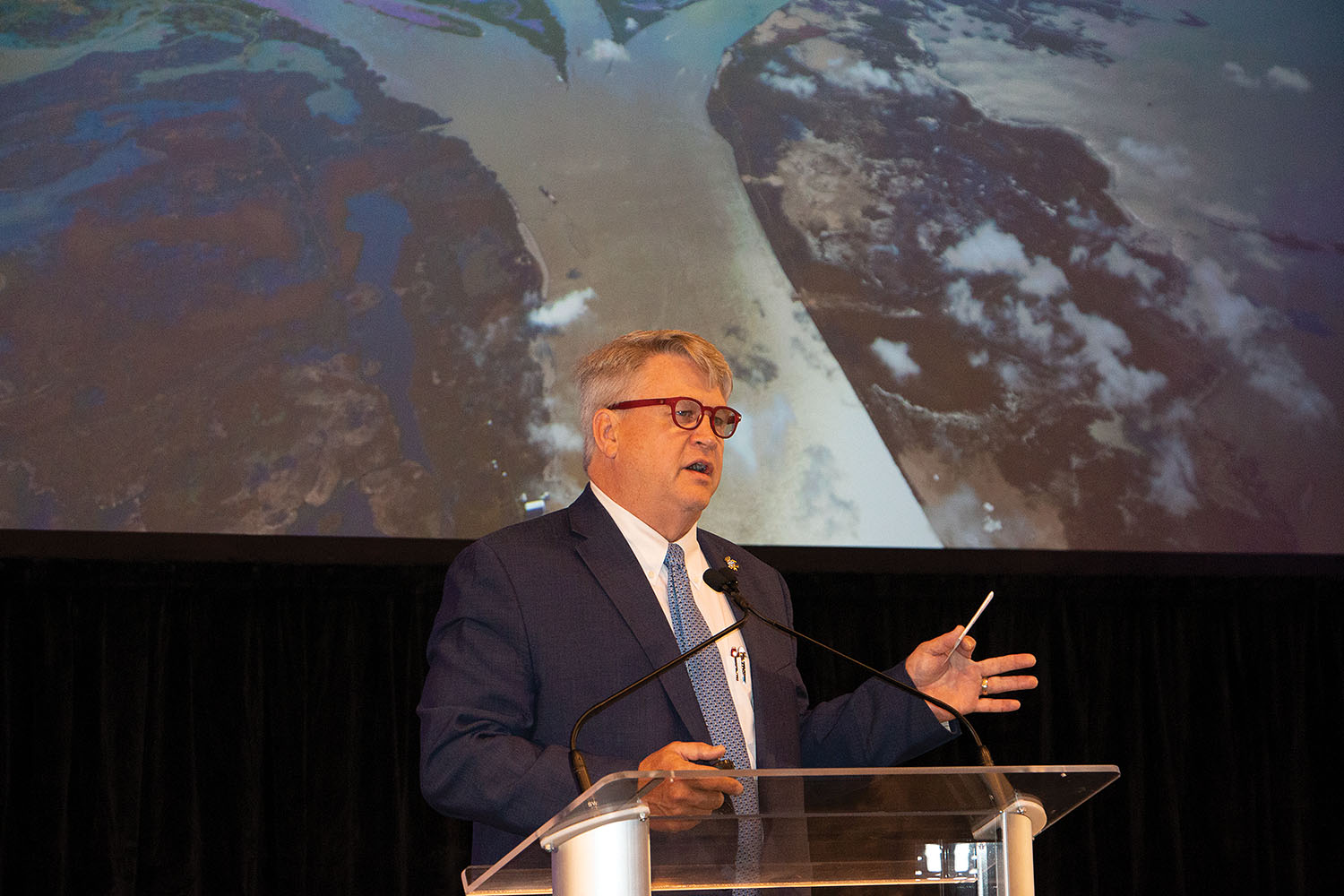 Highlighting the importance of improving safety through technology use and continuing to fund navigation projects, Sean Duffy and Paul Rohde led the audience at the Inland Marine Expo (IMX) through an education session titled “Building And Maintaining Our Marine Highway.”

The annual expo is sponsored by The Waterways Journal and was held May 23-25 in St. Louis, Mo.

Duffy, executive director of Big River Coalition, spoke about several issues that, although not readily visible to the eye, can still cause big problems for mariners. He calls these “invisible infrastructure” issues.

He began his speech by talking about the importance of the Mississippi River. Forty-one percent of the rainfall in the United States eventually flows into the Mississippi River, he said. The river carries 500 million tons of cargo in and out of the Southwest Pass, with much of that being grain and ore, he said.

The idea for the project to deepen the Lower Mississippi River between the Gulf of Mexico and Baton Rouge to 50 feet began 10 years ago, even though the work began in 2020, Duffy said. Two phases of the project are complete, up to Mile 175.

However, pipelines in the  Venice Corridor (Mile 12 AHP to Mile 11 AHP) have not been successfully surveyed to show their depth below the river bottom, holding up the completion of the project.

Duffy said he believes the pipelines, three of which carry natural gas, one petroleum, one propylene and one propane, will take another year to find and relocate.

One new piece of technology that could help find some of these pipelines is called the Multi-Sensor Towbody system (MuST). The system, developed by the University of Washington Applied Physics Laboratory in conjunction with commercial partners, was funded by the Department of Defense and originally used to classify unexploded ordnance on the seabed.

Duffy also spoke about the need to apply existing technology to maritime uses on the Mississippi Ship Channel. Using paper calculations can lead to mistakes, as he said the National Transportation Safety Board pointed out on the allision with a crane barge and the Sunshine Bridge in Burnside, Ala.

Typically such calculations are found by subtracting the established height of the low steel of a bridge and the closest river gage. However, such calculations are close approximations at best, he said. Also, errors can creep in. After reading the NTSB’s Marine Safety Brief about the allision, Duffy decided to estimate bridge heights for the seven bridges that cross the Mississippi River Ship Channel and noticed an error for the Baton Rouge I-10 Bridge air gap calculations, where two federal agencies were subtracting the river level on a gage on a different river from the bridge.

There is no need for calculations that can lead to incorrect measurements, he said.

“The sad part is we have technology out there that can provide those numbers pretty quickly,” Duffy said.

Finally, Duffy talked about infrastructure that was not envisioned to cause problems in past years but has turned out to have disadvantages. The example he gave was that of some powerlines crossing the river in the area of Avondale, La. These turned out to be a problem when the region was hit by Hurricana Ida, and the lines came down and were laying across the river.

“They shut the river down, basically cutting it in half during recovery operations,” he said.

Moving forward, he said, the maritime community must think about the long-term effects of these invisible infrastructure issues and use available technology, even if it comes from other industries, to improve safety for everyone.

“It shouldn’t be so complicated to be safe,” he said.

Rohde, vice president of the Midwest area for Waterways Council Inc., celebrated the funding for the inland river system in the Infrastructure Investment and Jobs Act and noted that the Water Resources Development Act (WRDA) of 2020 included a provision to adjust the cost-share ratio for new construction and major rehabilitation projects to 65 percent federal/35 percent Inland Waterways Trust Fund from a previous 50/50 split before the provision sunsets in FY 2031. A provision in the Senate’s version of WRDA would permanently make the split 75 percent federal/25 percent trust fund.

The changes come on the heels of the industry lobbying to increase the diesel tax 45 percent, up to 29 cents a gallon, in 2014 in order to increase the trust fund’s balance to help fund such projects more quickly.

The funding from these resources has allowed funding some priority projects to completion while providing partial funding for others, Rohde said.

For example, he pointed out that the funding allocated for construction of an additional chamber at Upper Mississippi River Lock 25 is the first work to be carried out as part of the Navigation and Ecosystem Sustainability Program (NESP).

Lock 25 currently has a 600-foot chamber that is nearly 90 years old. The work will add an additional 1,200-foot chamber, big enough for a standard-sized tow. Although the program was authorized by Congress in 2007, no funding was provided to start construction until in the IIJA.

In looking toward the future, Rohde asked those in attendance to talk to their Congressional representatives about supporting a provision included in the Senate’s version of WRDA 2022 that would permanently increase the cost-share split for new construction and major rehabilitation to 75 percent general fund and 25 percent Inland Waterways Trust Fund.

“The members of the House need to hear this is something the industry supports,” he said.

Being vocal about the industry’s need for continued work at the nation’s aging locks and dams and the importance of keeping commerce moving on the rivers is important, he said, adding that he is very concerned about the condition of the dams over the next 10 years.

Speaking out about these issues is making a difference, he said, adding, “In this industry where we’ve said ‘out of sight, out of mind’ many times, we’re starting to change that.”