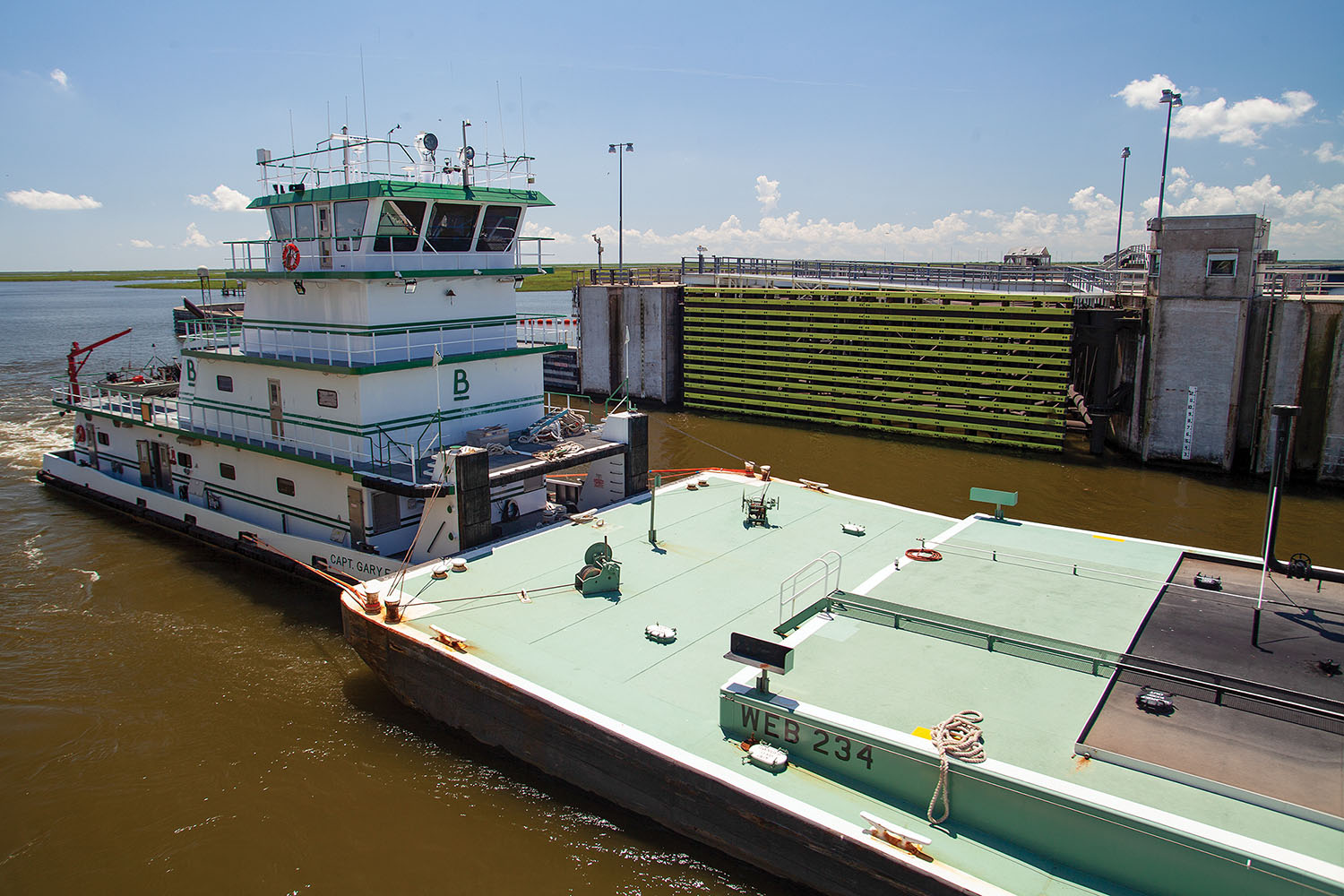 Members of Congress, the governor, the mayor and other local elected officials, an assistant secretary of the Army, top leaders from the U.S. Army Corps of Engineers and the Federal Emergency Management Agency (FEMA), and members of the Southeast Louisiana Flood Protection Authority (SLFPA)—all met May 27 in eastern New Orleans to both celebrate the current state of hurricane protection in the region and warn of its limits.

The event highlighted the official completion of the Greater New Orleans Hurricane and Storm Damage Risk Reduction System (HSDRRS), a 130-mile-long perimeter system of levees, flood walls, pumping stations and other structures designed, paid for and built after Hurricane Katrina decimated the New Orleans area in 2005. This year, the Corps completed the system, with the state of Louisiana, or more specifically, SLFPA-East and SLFPA-West, assuming operation and maintenance responsibilities.

The site chosen for officially “handing over the keys” to the system was the Lake Borgne Storm Surge Barrier, a 1.8-mile-long arcing wall that, as its name indicates, is designed to stop a hurricane’s storm surge from reaching the city by way of the now-closed Mississippi River-Gulf Outlet, the Gulf Intracoastal Waterway (GIWW), Lake Borgne and, ultimately, the Gulf of Mexico. The surge barrier features a 150-foot-wide navigable floodgate and a 150-foot-wide navigable bypass floodgate, also called the “barge gate.” At a cost of $1.3 billion, the surge barrier, also called the “Great Wall of Louisiana,” is the largest design-build construction project in the Corps’ history.

The surge barrier isn’t the only superlative in the HSDRRS, either. At the southern end of the system lies the Gulf Intracoastal Waterway West Closure Complex, which includes a 19,140-cubic-feet-per-second pumping station, a 225-foot floodgate across the GIWW, five sluice gates and a network of levees and T-walls. The West Closure Complex, which cost about a billion dollars, is the largest structure of its kind in the world.

The entire system, which cost about $14.5 billion, was designed and built to provide the New Orleans area protection against a “100-year storm,” or put differently, protection against storm surge that has a 1 percent chance of occurring in any year. And with several intersections with the GIWW, operation of the HSDRRS requires close collaboration between the Corps, the U.S. Coast Guard, the Southeast Louisiana Flood Protection Authority and the maritime industry.

“Today’s ceremony celebrates the completion of the entire system now, as the final contracts were completed earlier this year,” said Col. Stephen Murphy, commander of the New Orleans Engineer District. “The HSDRRS’ entire 130-mile perimeter and every single one of its structures is now operated and maintained by the dedicated partners and teammates with the state of Louisiana and the Southeast Louisiana Flood Protection Authorities.

“The system is stronger and more resilient than it’s ever been,” Murphy added. “And it’s actually proven its value numerous times. It has paid for itself time and again over seven separate storms, major storm events, since 2008.”

Most recently, HSDRRS took a direct hit to its southern flank in Hurricane Ida, a Category 4 storm that made landfall near Port Fourchon, La., on August 29, 2021, and slowly moved inland, eventually crossing the Mississippi River near Reserve, La., before moving off toward the northeastern United States. Though there was extensive wind damage throughout the region and flooding outside the levee system, the HSDRRS functioned as designed, shielding areas within the system from the brunt of Ida’s storm surge.

What’s In A Name?

Murphy was sure to point out that the Corps intentionally chose “Hurricane and Storm Damage Risk Reduction System” rather than the previously used “hurricane protection system,” which, he said, “was a system in name only.” The system of levees and flood walls present for Hurricane Katrina crumbled during the storm, flooding much of the entire region.

In the days after Hurricane Katrina, Corps leadership looked carefully at what to name the new system. Ultimately, the Corps went with HSDRRS because, while the system reduces risk from hurricane-driven storm surge, risk to the area remains.

“There will inevitably be a storm that is greater than this incredible system was designed to handle,” he said. “Every single one of us at every level plays a crucial role in reducing our collective risk. … The system reduces risk, but it doesn’t completely eliminate it.”

“I’m so excited to say we are entering hurricane season with the greatest level of protection that’s really second to none,” said New Orleans Mayor LaToya Cantrell. “Our levee protection system is stronger than ever before. We know that it was tested in true fashion when Hurricane Ida came our way, and we were spared. It worked.”

At the same time, Cantrell admitted that “we are a coastal community,” and thus, vulnerable to impacts from hurricanes.

“This is a significant investment, and we know that it does reduce risk, but it does not eliminate risk,” Cantrell said. “Therefore, we have to do everything possible to ensure we continue to mitigate and protect our region, of course our city, my city, and this state. From what we know, it’s not a matter of ‘if.’ It is ‘when.’”

Cantrell went on to ask for continued support and investment in flood mitigation projects in New Orleans. She specifically mentioned a plan to divert rain water from the city’s Lake Vista and Lakeview neighborhoods to retention areas in City Park instead of the city’s drainage canals. Cantrell pointed to the Lake Borgne Surge Barrier as a success story for what happens when the federal government invests in a local community.

“It is a true example of, when the federal government invests big, the results are big,” she said.

Louisiana Gov. John Bel Edwards reiterated the significance of the system’s name, while also stressing that now is the time for residents to prepare for storms that may come this hurricane season.

Edwards stressed how storms have been intensifying more quickly of late. He also encouraged residents to visit the state’s emergency preparedness website, www.getagameplan.org.

Assistant Secretary of the Army for Civil Works Michael Connor said, after reflecting on the years of work that went into the HSDRRS and looking at the crowd gathered for the event, it was the partnerships formed over the 17 years since Hurricane Katrina that really stood out to him.

“We can’t accomplish anything meaningful like this system without the partnerships of all of these leaders at the federal, state and local levels,” Connor said. “It’s simply impossible to do that, and I know we have a group of predecessors who decided long ago that partnership was the best way to proceed and, as Col. Murphy mentioned, we’re standing on their shoulders to celebrate this accomplishment today.”

Connor said that one of the key reasons that HSDRRS became a reality was that it started with the resources needed to build it. There was also a “dogged determination to focus on the needs of the communities we’re all charged with serving,” Connor said, along with a commitment to acknowledging past failures in hopes of building a better system for the future.

Connor added that one of the beauties of the HSDRRS is that it protects all of the New Orleans area, from its “most affluent to its most vulnerable communities.”

“It’s not just because it protects this important set of commerce that moves through these waterways—that’s another important aspect to the nation,” Connor said. “But the lessons we’ve learned and the Corps has learned in developing and constructing this system are going to benefit communities all across the nation.”

Connor said, ultimately, it’s all about helping communities be resilient in the face of natural threats.

Work Left To Do

But it was the brief address from Matt Jewell, president of St. Charles Parish, that illustrated that work remains to provide a similar level of storm damage risk reduction to a wide swath of south Louisiana.

On the west bank of the parish, though, it’s a different story. The parish has spent $50 million to build its own levees, Jewell said, while it awaits a 100-year federal system. Earlier this year, Spellmon signed a chief’s report endorsing the 31-mile, $1.6 billion Upper Barataria Basin project, which would protect portions of Ascension, Assumption, Jefferson, Lafourche, St. Charles, St. James and St John the Baptist parishes.

Jewell thanked Graves for helping get the plan passed out of the House Transportation and Infrastructure Committee and into the Water Resources and Development Act now under consideration.