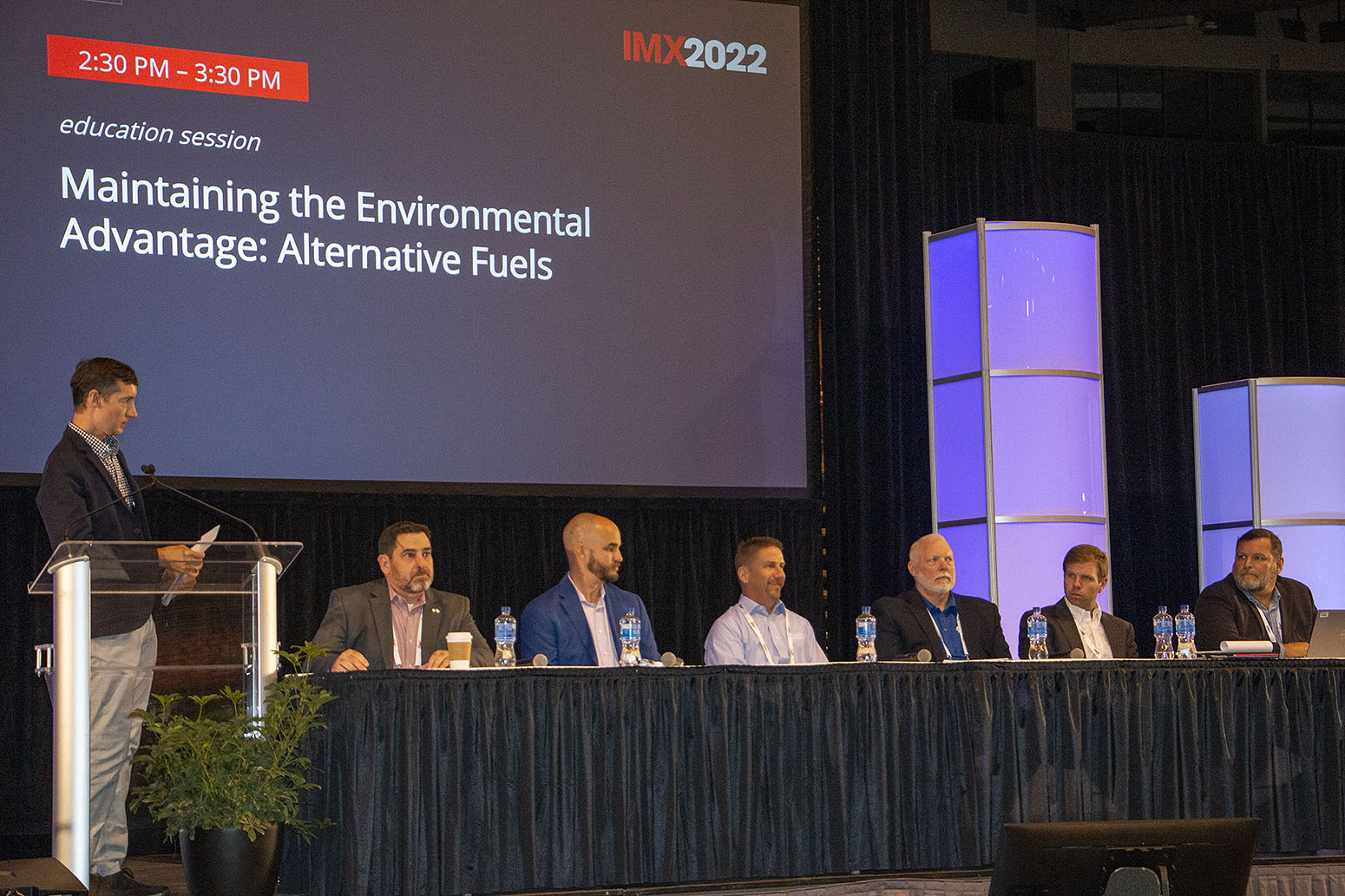 Panelists at the Inland Marine Expo’s session on “Maintaining The Environmental Advantage: Alternative Fuels” on May 24 talked about the strengths and weaknesses of many different fuel options.

Roy Bleiberg, vice president of business development for North America for the American Bureau of Shipping (ABS), said no one fuel is perfect for all situations, but it is clear that there is an international drive to reach net zero emissions by 2050 and that customers are already asking about what U.S. companies are doing to meet that goal.

Sebastian talked about The Shearer Group’s LNG projects and challenges. The company initiated three LNG projects, but only one of those is still ongoing.

The 800 hp. towboat the mv. Principio is one of the canceled projects, with difficulty getting the small, 300-gallon tanks needed approved by the Coast Guard, he said.

A 6,000 hp. towboat with dual fuel capacity was also canceled.

“The technology either wasn’t quite ready or wasn’t in the right state,” Sebastian said.

In particular, no 800-1,200 hp. marinized LNG engines were available, he said, and the energy economy of dual-fuel engines was considerably less than expected.

The remaining projects are the SCF Marine Highway and SCF Container Express, both vessels that are being retrofitted to use LNG. Major challenges continue to be making sure that the vessels have equivalent levels of safety and that they receive the necessary Coast Guard reviews and approvals.

Sebastian stressed that it is necessary to demonstrate to the Coast Guard that the parts for construction are safe for vessel use.

“They have been working with us, but it has to be safe,” Sebastian said.

Complita spoke about the mv. Hydrogen One, a methanol-fueled towboat that produces hydrogen via a methanol to H2 generators for on-board hydrogen production.

One strength of hydrogen is that the technology is available now, he said. A challenge is that it takes four times the volume when liquefied as traditional fuel to get the same amount of energy.

The mv. Hydrogen One converts methanol to hydrogen in real-time for marine use, with the hydrogen consumed as it is produced, Schluter said. He said that means it is crew-safe and friendly, with no noise and little vibration.

Complita said design completion is expected by July 2022, with the steel cut in the third quarter and delivery estimated in the fourth quarter of 2023.

Sarrat began his talk by explaining the difference between bio-diesel and renewable fuels. Bio-diesel goes through esterification: a chemical reaction resulting in the formation of at least one ester product. Renewable fuels use a more complex process called hydrotreating—the reaction of organic compounds in the presence of high-pressure hydrogen to remove oxygen—and is therefore more costly.

While bio-diesel is less costly, it attracts water and is prone to microbial growth over time. It is also readily available, Sarrat said.

Both of these fuels can also be blended with diesel fuel at different levels.

To lower carbon emissions by using an alternative fuel, “This is one of the first steps you can take,” Sarrat said.

Reynolds talked about challenges from an infrastructure standpoint. Of the fuels discussed, he said, bio-fuels are the most readily available. While they are currently marketed more toward the Gulf Coast and West Coast, it would be viable to provide them to the inland fleet, he said.

Additionally, he said, infrastructure does exist for the distribution of methanol, although it hasn’t yet been used for the maritime market yet.

In 2021, about 12 percent of new orders globally were for alternative fuels, marketwide, Reynolds said. Six percent of that was for LNG.

Looking toward the future, Complita said it will be important for companies considering alternative fuels to have a good idea of their power profile over several months first.

Additionally, he said, companies should not talk to only one naval designer or architect.

“Talk to as many as you can,” he said, stressing that it was important to learn about all available options.

While many companies wonder about how to pay for conversion to alternative fuels, he said currently there are grants available. As these fuels become more common within the industry, there are unlikely to be as many opportunities, he said.

Bleiberg said companies should be establishing a decarbonization strategy now.

“Your customers are going to be asking about it if they haven’t already,” he said.

Sebastian noted that these designs will all take more time than with a traditional vessel, as none of them are “off-the-shelf” options.

Finally, Reynolds said there are still a lot of unknowns and uncertainties as to fuel costs, with early adopters facing the possibility of more costs to pay for the new technology until it becomes more common. However, he said, he expects those fuel costs to eventually balance and stabilize.

“When demand is there, we find a way to get the supply to our customers,” he said.