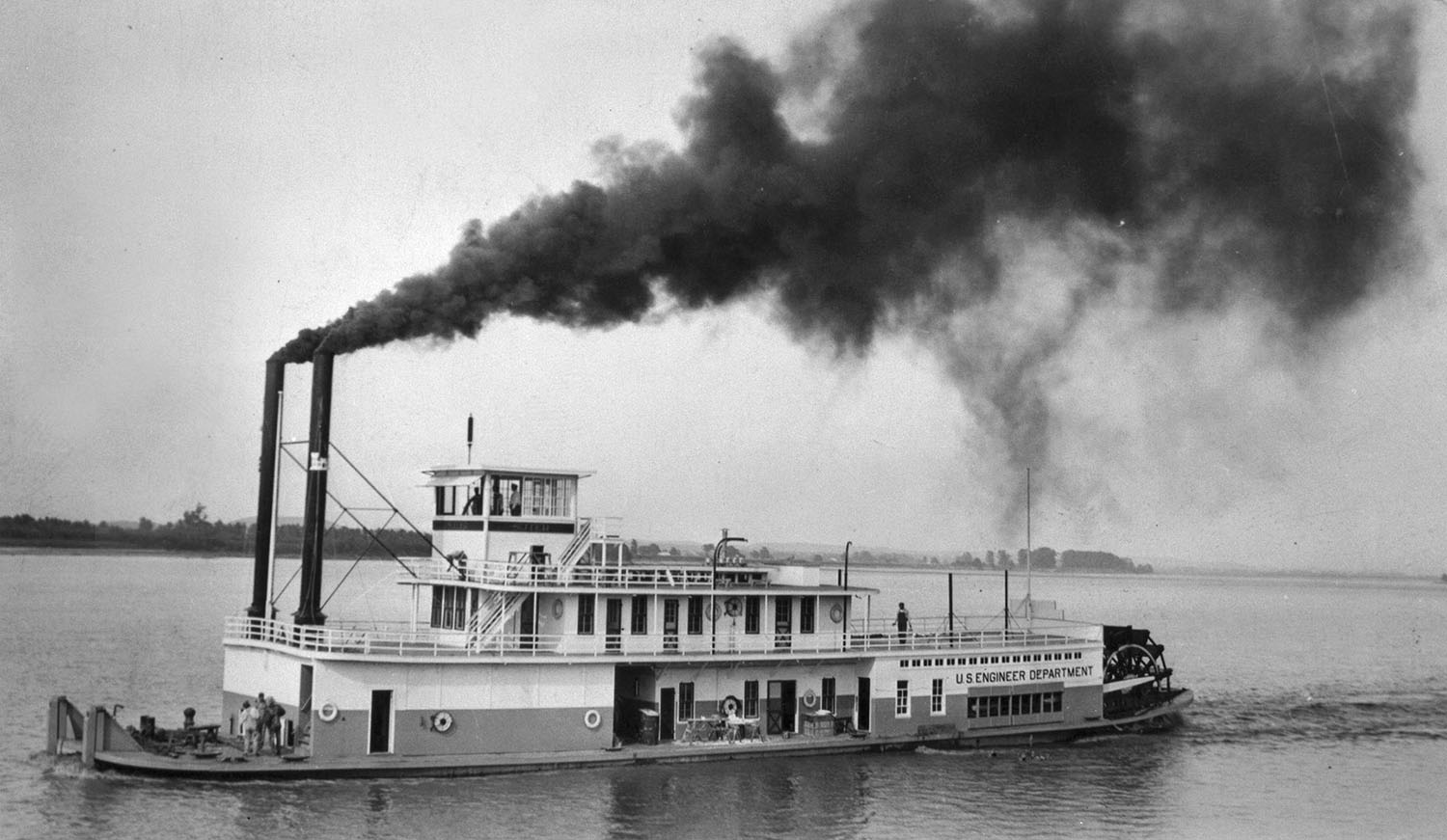 In the May 23 Old Boat column, we mentioned the Boatyard of the U.S. Engineer Department at Gasconade, Mo., located near present-day Mile 104.8 on the right bank of the Missouri River. This facility had its beginnings in 1892 when the Missouri River Commission leased a parcel of farmland just above the mouth of the Gasconade River for the purpose of building and repairing vessels being used in Missouri River improvements. The government purchased the land in 1910, adding acreage in 1929 as the shipyard began building more vessels.

According to the Corps of Engineers publication Soundings—100 Years of the Missouri River Navigation Project, written by John Ferrell in 1995, by 1935 there were 500 people employed at Gasconade. The boatyard was very active during the World War II years and immediately after, but as the Missouri River navigation improvement projects were completed, there was less use for the yard. By 1966, there were only 35 employed there, and in June 1972 the boatyard was closed. Over the 80 years it was in operation, hundreds of vessels were built there, including towboats, barges, deck flats and others. Countless pieces of equipment had also been repaired there.

This once-active yard has been idle now for 50 years, so it is hard to imagine what it was once capable of. Two of the largest vessels constructed at Gasconade were the twin steam sternwheel towboats Suter and Bixby. The Suter was built first and came out in 1928. Named for Major Charles Suter, who had authored a Missouri River navigation improvement plan in 1881, the hull was 159 by 30 feet, and while listings in Way’s Steam Towboat Directory and the Inland River Record show it as having a steel hull, an ad placed by the American Rolling Mill Company (Armco) in the July 26, 1930, issue of The Waterways Journal indicates that the hull was made of ingot iron. The Suter was fitted with condensing engines, 12’s, 24’s with 6-foot stroke rated 462 hp. built by Shelton Bros., Paducah, Ky.  A Foster-Wheeler water-tube, oil-burning boiler supplied the steam.

Way’s says that Capt. Robert H. Wilson was master of the Suter for “some time” on the Missouri, with Charles Weiher chief engineer. The Suter continued in service for the engineers on the Missouri River until sold at a public sale to Capt. J.W. Menke, St. Louis, on February 7, 1952. According to Way’s, the sale price was $8,307.77. Capt. Menke renamed the boat Chaperon and moored it under his showboat Goldenrod at St. Louis. It was not used to tow the showboat but provided steam and electrical power. About 1954, the Chaperon was sold to Oil Transport Company, which took it to North Bend, Ohio, to serve as a steam plant for a dock there. The boat soon sank and was raised, but the story was far from over at that point.

Frank Johnston, of Johnston Party Boats, Cincinnati, purchased the hull after it was raised, and rebuilt it into an excursion barge that was appropriately named Chaperon. It served for many years in the Cincinnati area, pushed by the towboat F.H. Johnston, which had been built by Johnston in 1954. In 1984, the pair were sold to BB Riverboats, Covington, Ky., with the barge being renamed BB Funliner, and the towboat Capt. Ben. According to Capt. Bill Judd, who did survey work on the vessels, the excursion barge received a new hull at Jeffboat in 1985-86. In 2000, the pair were again sold and went to Memphis, with the barge being renamed City of Memphis and the towboat renamed Capt. J.T. Meanly. In the 2017 Inland River Record, the Meanly was shown as being out of service, with no mention of the excursion barge.

The Bixby, a sister to the Suter, was launched at Gasconade in 1929, identical to the Suter in hull dimensions and machinery. Way’s states that Capt. William D. Earp was master for many years on the Missouri, and that in 1945 the vessel began working on the Lower Mississippi, returning to the Missouri in the fall of 1947. In 1956, the Bixby was sold to Economy Boat Store, Wood River, Ill., for use as a landing boat.

Both boats had useful purpose far beyond their operational years, an indication of quality craftsmanship by the individuals that constructed them at the Gasconade Boatyard.

Caption for top photo (Click on photo for full image): The Suter on trials at Gasconade, Mo., in 1928. (U.S. Engineers photo)