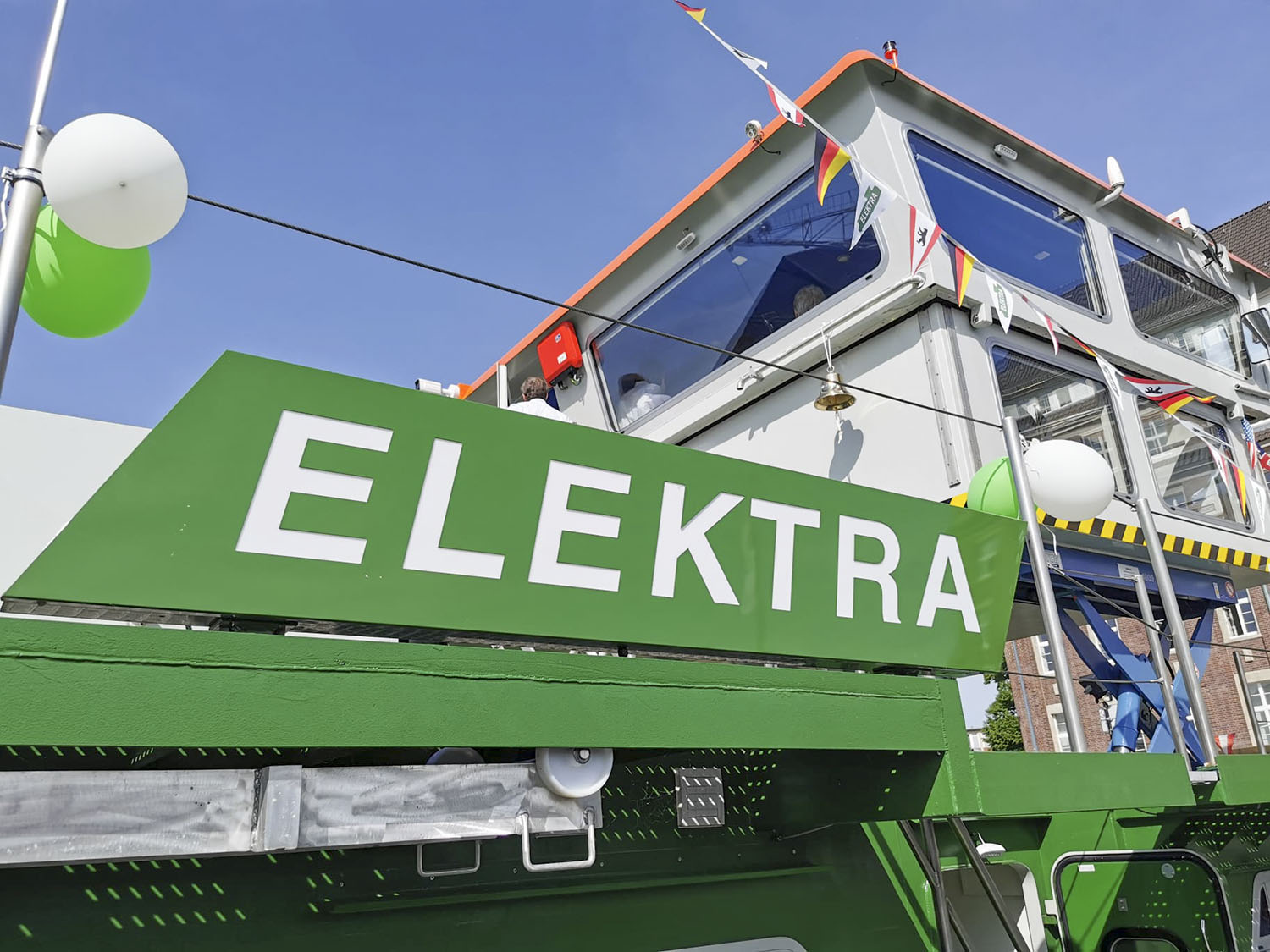 A boat touted as the world’s first hydrogen-powered push tug was delivered and christened in Berlin on May 16 for further long-term operational testing. The boat requires two stations to recharge its fuel cells.It is anticipated to come online in 2023.

The German boat uses a different hydrogen technology than that used by a planned U.S. boat called the Hydrogen 1. That boat, developed by a partnership between Maritime Partners, Ardmore Shipping Corporation and Element 1 Corporation, will convert methanol to hydrogen aboard the vessel to overcome the cost and difficulties associated with transporting compressed hydrogen. The Hydrogen 1 is expected to join Maritime Partners’ fleet in 2023 (WJ, December 3, 2021).

In  the Westhafen, Berlin’s largest port, the mayor of Berlin, Franziska Giffey, named the push boat Elektra. After almost two years of construction at shipyard Hermann Barthel GmbH in Derben and the transfer to the Westhafen, the boat will undergo further long-term testing.

The boat was developed, built and tested by a partnership including under the project management of the Department of Maritime Systems Design and Operations at the Technical University of Berlin; BEHALA—Berliner Hafen- und Lagerhausgesellschaft—(logistics); the Hermann Barthel shipyard; Ballard Power Systems (fuel cells); Argo-Anleg (hydrogen system); SER Schiffselektronik Rostock (electrical energy system); EST-Floattech (battery system); and HGK Shipping (nautical operation) were involved in the development, construction and testing of the Elektra.

Besides providing energy for the ship’s propulsion and pushing convoys, the system provides energy for the crew, who live, cook and wash on board, including the temperature control of the cabins and the wheelhouse. The battery system needs to operate within a certain temperature for efficiency and a long lifespan. All of this must be done with a limited amount of carried energy and without loss of operational range.

A self-developed energy management system and a digital sailing assistant support the captain and logistics planner with the planning of operations and transports.

With 750 kg. of gaseous hydrogen (at a pressure of 500 bar) on board and a battery capacity of approximately 2,500 kilowatt hours, the ship has a range of about 400 kilometers when sailing in combination with the loaded heavy lift barge Ursus.

The TU Berlin has contracted Mittelelbe Business Park and H2 Green Power & Logistics for filling and transporting the tank systems (Multiple Energy Gas Container—MEGC) with green hydrogen until the end of the Elektra project at the end of 2024.

The first stations for the changeover of hydrogen tanks and 500-kilowatt electric charging stations will be operational in the Westhafen as well as in the port of Lüneburg in 2023. Next to the Westhafen, only one additional land-based station is needed to supply the Elektra with hydrogen and electricity to sail on the waterways of Berlin in the direction of the Rhine/Ruhr, Hamburg and Stettin. In total, the vessel can operate push-barge combinations up to 150 meters in length.

The MEGC can be exchanged with the onboard crane and the power connection runs via a loading beam that guide the cables to land, connecting the vessel to the charging station in a short time and leaving the quayside free of cables.

Testing the Elektra will initially take place in the capital region; as of 2023 the tests will also be continued on long-distance routes towards Hamburg.

“After completion the partnership project will have learned a lot,” according to a press release by Behala, the design partner. “It will then also be able to say how future commercially viable inland shipping vessels and coastal ships can be optimally equipped for the many purposes in this performance class and what concepts can look like for other ship types and performance classes.”