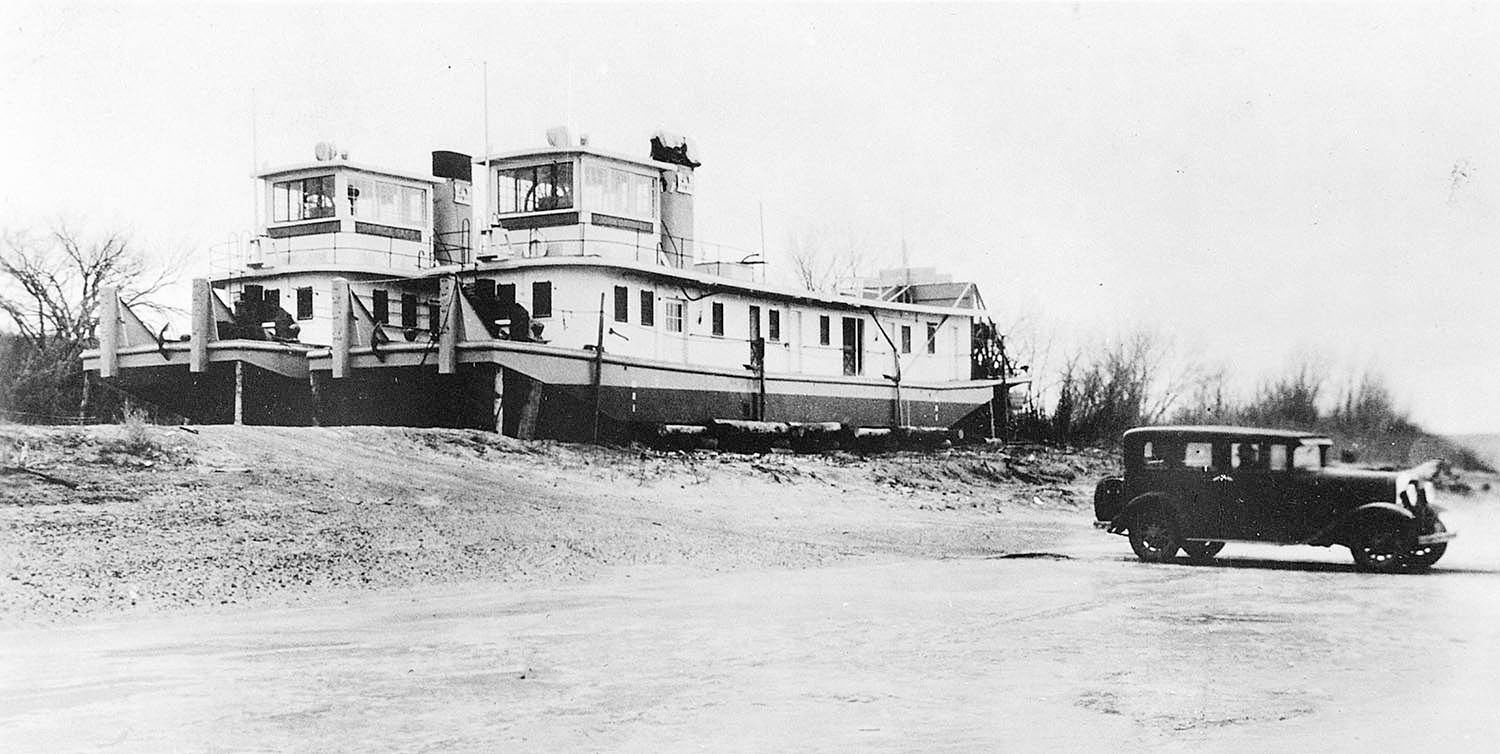 The Fort Peck Dam on the Missouri River in Montana was authorized by Congress in 1927, and President Franklin Roosevelt signed an executive order in October 1933 under the National Industrial Recovery Act approving the construction of the project. Within a week of his signature, the Kansas City District of the U.S. Engineers opened an area office in Glasgow, Mont., to supervise the Fort Peck construction. As a part of this project, the U.S. Engineers’ Gasconade, Mo., Boatyard began work on two sternwheel towboats to be utilized in the work there. These two boats were to be named after members of the famed Lewis & Clark Expedition; Sgt. John Ordway and Sgt. Patrick Gass.

Ordway, born in New Hampshire in 1775, issued provisions during the trip, as well as serving as a keeper of registers and records. After the journey he settled near present-day New Madrid, Mo., and was the owner of two plantations. The 1811 earthquake decimated his landholdings, and he died in 1817.

Gass, born in Pennsylvania in 1771, served as a carpenter on the expedition and published the first journal documenting it in 1807. He remained in the Army and lost an eye in battle during the War of 1812. He settled in Wellsburg, W.Va., on the Ohio River and created a ruckus at age 91 by trying to enlist in the Civil War because he “wanted to fight the rebels.” He died in 1870 at age 98.

The boats were constructed simultaneously, side by side, in 1934. The steel hulls were 90 by 22 feet, and overall dimensions with sternwheel were 107 by 22.7 feet. Each was powered by a Fairbanks-Morse diesel engine of 210 hp. at 360 rpm. After completion, the boats left Gasconade together en route to the construction site of the Fort Peck Dam, but their progress was halted due to low water in southern North Dakota in the fall of 1934. They remained there until the spring of 1935, when the John Ordway continued on to Fort Peck. The Patrick Gass returned south to work on the Missouri River in the Omaha, Neb., area. The Ordway would remain working at Fork Peck until April 1940.

In 1949, the John Ordway was extensively rebuilt. This work was done at the Gasconade Boatyard, where it had been constructed originally. The rebuild involved the conversion of the boat from sternwheel to twin-screw. The hull was lengthened 20 feet to accommodate the propellers and rudders, and the single Fairbanks diesel was replaced by a pair of Superior diesels rated at 600 hp. Additional work included raising the pilothouse, shifting the stack aft and adding a cabin behind the pilothouse. The Engineers must have been satisfied with the results of this rebuild because, in 1950, the Gasconade Boatyard crew did the same with the Patrick Gass.

The boats continued in service to the Engineers, and in 1958 the Patrick Gass was sold at a public sale to Wood River Boat Company and renamed Wood River. It was again sold in 1965 to Upper Mississippi Towing Corporation, Minneapolis, and in 1968 it was sold to Avondale Shipyard, New Orleans. Avondale repowered the boat with a pair of Cummins diesels of 600 hp. and renamed it Charlie Brown. It was last listed in the 1975 Inland River Record (IRR).

The John Ordway was sold at public sale in 1965 to John M. Hannon, and it was listed in the IRR under Hannon Marine Service, Slater, Mo. It burned at Baton Rouge on February 9, 1968, and was considered a total loss. The hull was sold in 1970 to Baton Rouge Marine Inc., and again sold in 1971 to John G. Canerot, Baton Rouge. It was ultimately disposed of in 1975.

Thanks to Steve Huffman for his help in researching the details concerning these two boats.