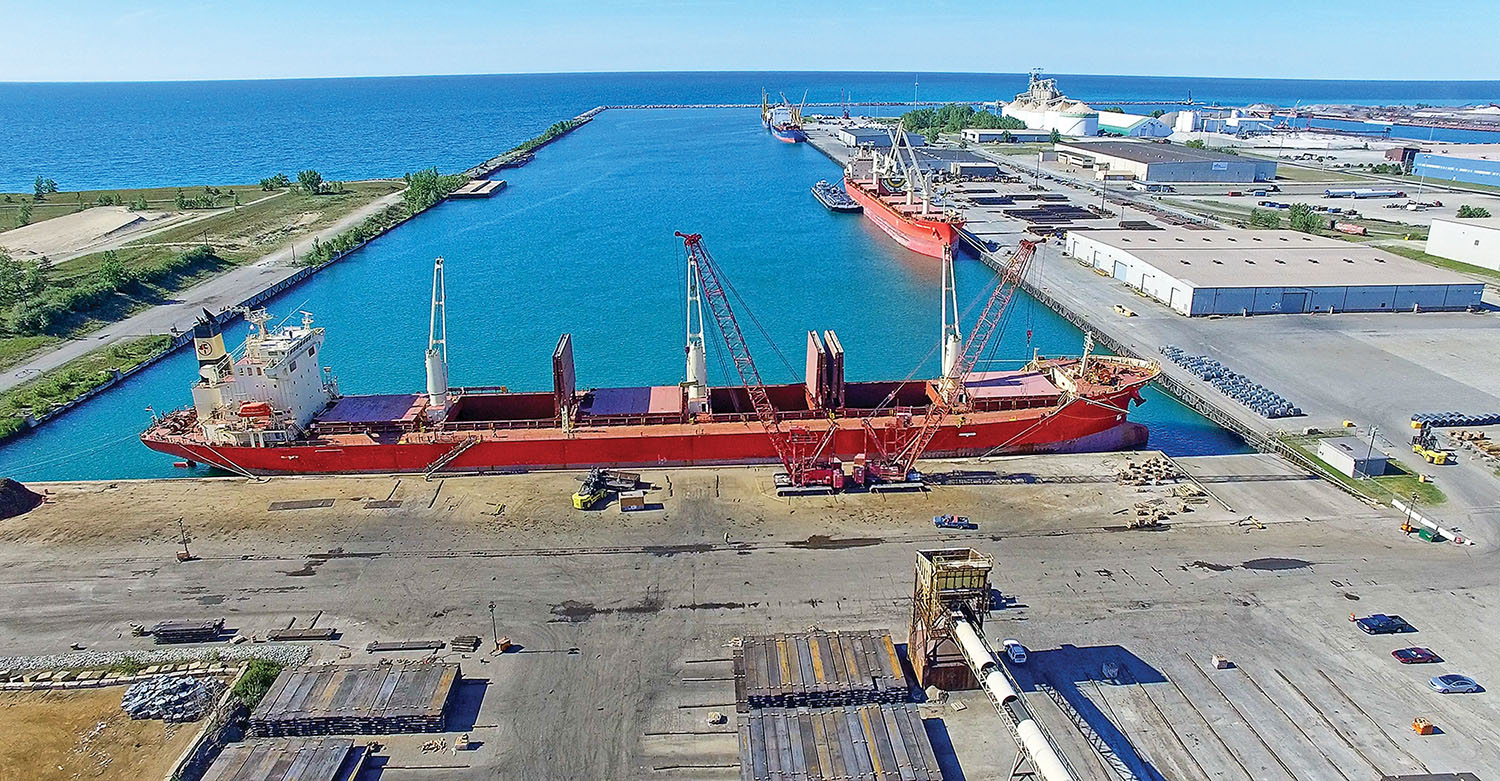 While barges, railcars and trucks may be frequent sights at the Ports of Indiana’s three ports, only one also has ocean-going vessels.

Its Burns Harbor site, on Lake Michigan, moves freight both from the Illinois River system to Lake Michigan and on the Great Lakes/St. Lawrence Seaway System. Ports of Indiana’s other two ports, Mount Vernon and Jeffersonville, are both on the Ohio River.

The Ports of Indiana–Burns Harbor opened in 1970, laying the foundation for future development of the region’s steel production and leading to the eventual creation of the other two state ports.

The port has celebrated several achievements.

In 1995, a $13 million project at Burns Harbor redesigned the breakwater and created a new underwater segmented reef to reduce wave force on the breakwater.

Norfolk Southern began providing rail-switching services at the port in 2011.

In 2014, the port received certification through Green Marine, a voluntary environmental compliance program.

More accolades have taken place in the past five years.

In 2017, Ports of Indiana–Burns Harbor received congressional support for a nearly $10 million infrastructure expansion, one of only 10 “FASTLANE” small project grants in the year. The award doubled the size of its bulk terminal and allowed cargo handling to increase by 8 percent.

In 2020, the U.S. Department of Transportation’s Maritime Administration (MarAd) awarded the Ports of Indiana $4 million to make bulk cargo supply chain improvements by converting a vacant gravel yard into a multimodal storage facility.

In 2021, the Burns Harbor port handled 3.39 million tons of cargo, up nearly 50 percent compared to 2020, and reached its highest annual shipment total since it began operation.

This year, Ports of Indiana–Burns Harbor announced it had won the Pacesetter award from the U.S. Great Lakes Saint Lawrence Seaway Development Corporation for the second year in a row, making it one of six U.S. ports to receive the distinction for international cargo tonnage increases. The award marks the 15th time the port has received the award. In total, Ports of Indiana–Burns Harbor registered a 135 percent year-over-year increase in international tonnage shipped in 2021 compared to 2020.

“We are thrilled to keep this trend going and receive the Pacesetter Award two years in a row in recognition of the increased international shipping at the Ports of Indiana-Burns Harbor,” said Ports of Indiana CEO Vanta E. Coda II. “We saw great growth opportunities in 2021, from steel slabs to coils to salt to foundry coke. Our location on the Great Lakes is a key factor to our success.”
Maritime operations at the Port of Indiana-Burns Harbor generate $5.2 billion per year in economic activity and support 30,000 total jobs. Burns Harbor handled 3.39 million tons of cargo in 2021, up nearly 50 percent compared to 2020.

Indiana designed its ports from inception not only to move cargo but also to add to the state’s economic development potential, bringing in good-paying jobs for its citizenry. While all ports lease property to users, Indiana does so to a greater degree than many others. That has paid off for the state, Coda said, with 11.2 million tons of cargo moved in total at the three ports in 2021 and much of that cargo going through a value-added process at the port, not just moved from one mode of transportation to another.

At Burns Harbor, 36 percent of the cargo includes steel, 40 percent involves steel manufacturing, 11 percent is agriculture and 13 percent is construction.

“If you think about Indiana, it’s the crossroads of America, but that’s kind of a worn phrase,” Coda said. “’We grow things, we move things and we make things’ is kind of the motto.”

He noted that Indiana is at the top of all states, per capita, in manufacturing.

There are six automobile manufacturers within the economic reach of the Jeffersonville port, so a lot of the traffic there deals with steel, he said. But at Burns Harbor, the number is greater as 25 percent of U.S. steel production is in the region. That also has proven to be a good location for skillsets that bend steel and otherwise manipulate it, even if it isn’t produced there, he said.

Steel wire, slabs and coils are all common forms of the product handled by Ports of Indiana.

Although located on Lake Michigan, Coda said those familiar with the river industry would notice some similarities with the way the Burns Harbor port operates and the way those located on the inland river system do.

The Burns Harbor port receives barges from the Illinois Waterway system, going “cross-lake” from Chicago to the port. Some of those come from as far away as New Orleans.

Also, he said, the Great Lakes system has locks, as the river system does. Sixteen locks allow transit of the entire network.

It wasn’t until a few years ago that the lakes community went to the federal government to have the lakes recognized as a system, “whereas the river system has always been in that mindset,” Coda said. “I think once they realize that, they would probably question why it took the lakes so long to embrace that systemwide branding.”

There are some differences compared to a purely river-based system, however. Burns Harbor also does business with much larger “laker” vessels and international trade as well. Sixty-one international vessels visited during the 2021 shipping season.

Also, because of its location, winter can shut down the system. Domestic transportation on the Great Lakes lasts about 10 months. International trade takes place roughly nine months out of the year. Lock maintenance work, including dewatering, takes place in the winter.

Coda said the Ports of Indiana is poised to continue growth in 2022. He noted the importance of bipartisan infrastructure legislation moving forward. The first notices of funding went out this spring, he said, and planning and engineering is likely underway with awards to start shortly.

“I feel like a lot of organizations will want to hit the ground running as soon as possible,” he said.

Coda said he feels that past awards have set the stage for the Ports of Indiana to be “more programmatic” if they win any of the federal grant money still up for grabs, leading to more efficiency and value.

“We can run a program of how we apply for a grant, potentially successfully win a grant and then successfully implement a grant,” he said. “Although all the civil engineering may be unique and custom, the process of how we implement it shouldn’t be.”

In looking at the cargo moving in and out of the port so far this year, Coda has a reason to be optimistic.

“As we look across our numbers, right now we’re up year over year,” he said. “We’re still seeing growth through the first quarter, and I just looked at April’s numbers, so it still seems as if from a year-to-date perspective that again we have growth happening. Burns Harbor has done well. Mount Vernon is up, and Jeffersonville is up to a lesser degree. Jeffersonville had one of its better years ever last year, so to still be up is encouraging.”

Even given the worst inflation in 40 years, Coda said he hasn’t seen traffic pull back to any great extent, nor has the low 2.2 percent unemployment impacted traffic movement in any significant manner so far.

“I think we’re going to do a little bit better, maybe a lot better than we did last year,” Coda said. “I think it might start slowing in the fourth quarter, but it wouldn’t surprise me if not.”
Instead, he said, “I think the pressure’s still on for growing or expanding.”

Caption for top photo: The Ports of Indiana–Burns Harbor, established in 1970, is located on Lake Michigan but receives cargo both from the Great Lakes/St. Lawrence Seaway system and “cross lake” from the Illinois Waterway. (photo courtesy of Ports of Indiana)