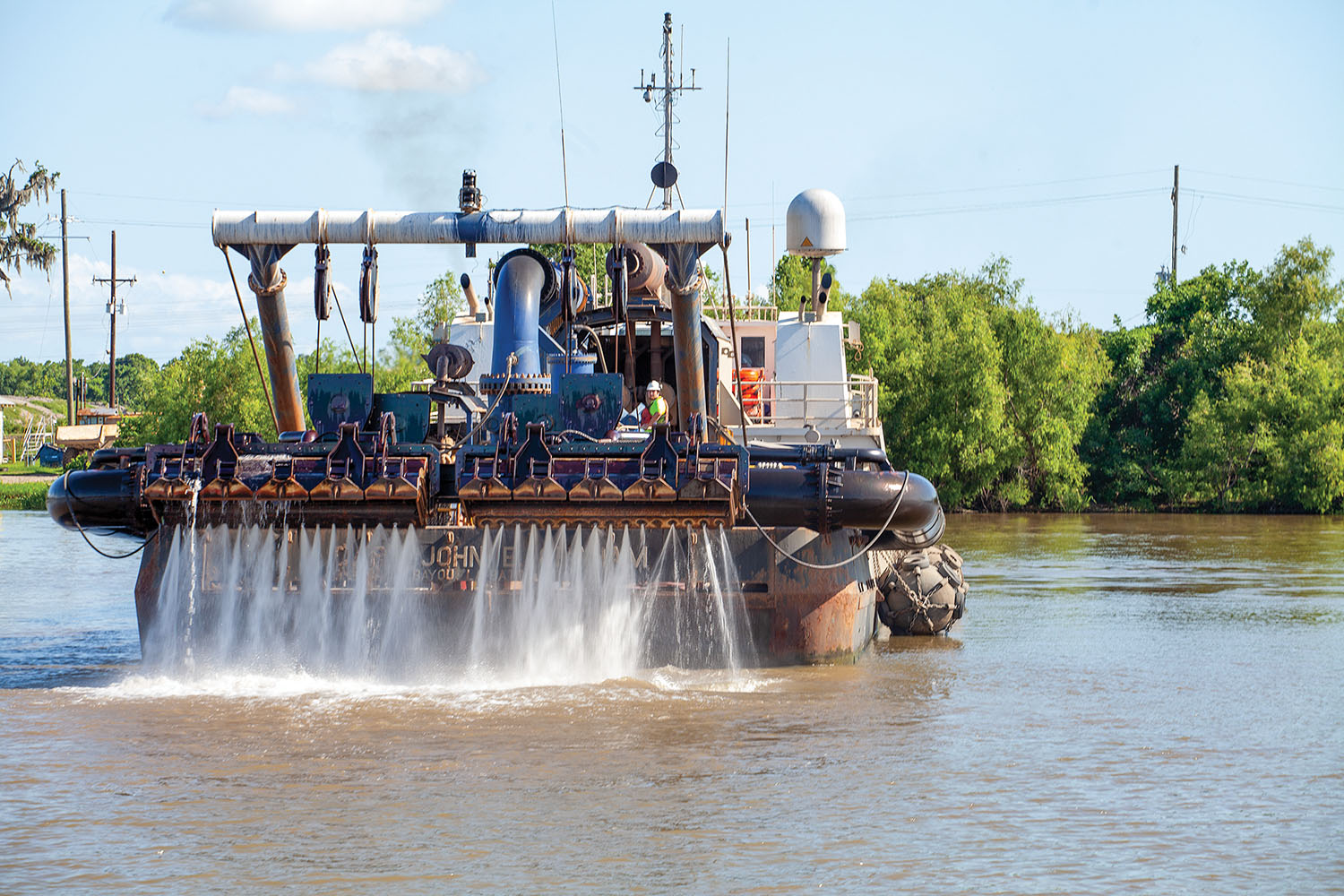 Stakeholder companies and state, local and regional officials gathered in Morgan City, La., June 7 for a ribbon-cutting ceremony to celebrate the reopening of the Atchafalaya River to deep-draft navigation.

“In 2014, we had a successful import-export business going on here,” said Mac Wade, executive director of the Morgan City Harbor & Terminal District. “We were dealing with Land O’Lakes, but in early 2015, all that changed due to prior dredging strategy and budget constraints.”

That prior dredging strategy and related funding constraints involved using traditional hopper or cutterhead dredges to clear the fluff from the Atchafalaya bar channel, the final 8-mile offshore stretch of the Port of Morgan City’s navigation channel. The bar channel is part of the Atchafalaya River and Bayous Boeuf, Black and Chene Project, a federally authorized 20-foot-deep by 400-foot-wide channel that connects the Port of Morgan City, the Gulf Intracoastal Waterway and the Atchafalaya River to the Gulf of Mexico.

“We knew we had to do something different,” Wade said at the June 7 ribbon-cutting. “We knew we had to make a change. We could not continue to dredge the bar channel like we’d been doing because of the excessive cost.”

The port then embarked on a multi-year plan to demonstrate that a new approach—agitation—would solve the fluff problem in the bar channel and allow deep-draft vessels to once again call on Morgan City. In 2016, the port and Corps conducted a demonstration program with the dredge Newport using agitation. The Newport crisscrossed the bar channel with its drag arms lowered, but rather than pumping material into the hopper, the Newport discharged it immediately overboard. The effort was a success in that it demonstrated an agitation-only approach was capable of dispersing the fluff sufficiently to allow safe navigation.

“We started doing some homework, and that’s where Brice Civil Constructors came in,” Wade said. “After an industry day, they said they would step up to the plate and build a platform that would be able to handle the material. Halimar Shipyard right here in Morgan City is the one that converted the vessel to our agitation dredge.”

Brice took an offshore service vessel owned by Barry Graham Oil Services LLC and modified it with jetted drag arms, a dredge pump and piping from Hagler Systems to discharge material directly overboard. Thirty-two jet nozzles on the drag arms serve a dual purpose of stirring up material on the bottom and blocking marine animals from the intakes. The drag arms then suck up the fluff, which is pumped back over the sides of the vessel. Brice named the first-of-its-kind dredge the “Arulaq.”

“It’s almost like a pressure washer with a vacuum attached to it,” explained Josh Matherne, port captain for Brice. “The name ‘Arulaq’ in the Alaska native language Yupik means ‘to agitate or stir.’ That’s what’s going on under the surface.”

Brice was ultimately awarded a four-year, single-award task order contract on October 30, 2018. The Arulaq started working in the bar channel in December 2019, with the current contract running through August 2023. At the beginning of the contract, the cost to dredge with the Arulaq averaged between $0.10 and $0.20 per cubic yard, compared to a potential cost of $6 to $7 per cubic yard for a cutterhead dredge or a $4 to $6 for a hopper dredge. With today’s high fuel cost, that differential is likely much greater. The Arulaq operates around the clock to keep fluff in the bar channel dispersed below 1.25 milligrams per liter.

Jon McVay, president of Brice Civil Constructors, said the success of the Arulaq isn’t just about Brice’s creativity or willingness to innovate. It’s more about the team—including the port, the Corps, the shipyard and the boat owner—that remained committed to the project.

“Together we made this work,” McVay said. “We couldn’t have done this on our own. That’s the hard part. Each person, the Port of Morgan City or any one of those entities, couldn’t have pulled this off without us all coming together. And that really is part of our business strategy to do it that way.”

McVay also thanked his Morgan City-based team that has worked over the past couple of years to boost the Arulaq’s uptime from 70 percent to close to 90 percent.

“I appreciate the opportunity to stand among people who are committed to the same things,” McVay said. “That aligned commitment really makes us set for the future.”

Col. Stephen Murphy, commander of the New Orleans District, compared the years of work that went into deploying the Arulaq to SpaceX, which spent years and billions of dollars to develop the ability to reuse rockets by landing them on barges. The eventual success of SpaceX, though, stands to revolutionize travel to space.

“It was not easy to get here,” Murphy said. “I can’t say enough good things about Brice and their persistence to get us here. I do think this provides a future for the value to the nation, that this ship and the partnership that exists right now brings to this state and this area.”

Symbolized by the ribbon-cutting, that innovation and partnership has reopened the Port of Morgan City to deep-draft navigation and import-export trade not seen there for eight years.

“Today,” Wade said, “we’re able to celebrate an innovative dredging technique that allows commerce to return to the Port of Morgan City. We’ve been waiting a long time.”