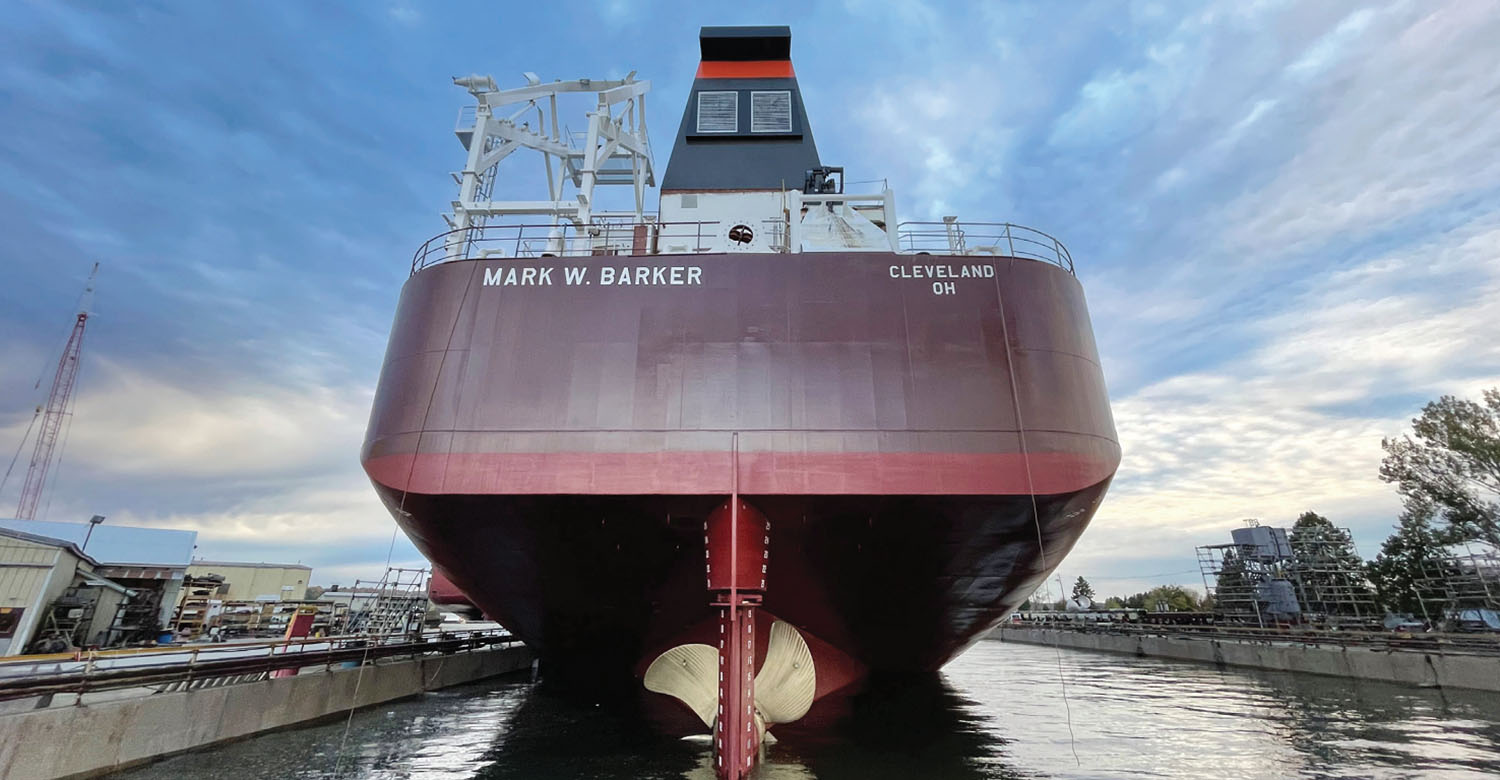 The 639- by 78-foot ship will have a hull depth of 45 feet and a carrying capacity of 26,000 gross tons. The vessel is named for Interlake’s president and second-generation leader, Mark Barker.

A new laker is a rare thing, Barker said, making construction of the mv. Mark W. Barker a special project.

“On the Great Lakes, we operate in pretty unique water in that we’re fresh water, so we have pretty long-lived assets,” Barker said. “We have ships running that were built in the ’50s.”

Working in fresh water gives lakers unusual longevity, which makes repowering and modernizing existing ships more common than building new, especially for the U.S. fleet. There have been new articulated tug barges, but not so much lakers.

“For us, this is our first new ship in 40 years and probably the first new ship on the lakes in 35 years,” Barker said. “For us, it’s exciting to be able to bring a new asset to bear.”

The mv. Mark W. Barker will bring some new design elements to the Interlake fleet that are also rarely seen in the broader U.S. Great Lakes fleet. Interlake is building the mv. Mark W. Barker with a particular customer’s needs in mind. That customer’s dock has length, width and depth limitations, so Interlake’s naval architecture team looked at vessel features that would best serve that facility.

“We started with how do we pull as much cargo from their dock as possible to make it economical for them,” Barker said. “That determined the vessel size. We also asked how do we carry the most amount of cargo.”

Those questions led Interlake to design a river class laker with two main features outside the norm: a forward boom rather than an aft-mounted crane and a square cargo hold rather than a V-shaped hold.

Most lakers carry cargoes that are free-flowing like iron ore, stone, salt or coal, Barker said, with conveyor systems that move the cargo ashore or to a hopper. The hold design maximizes the amount of cargo the vessel can carry, while the forward boom allows the ship to serve river docks that have limited access.

“We’re navigating up some narrow channels and interesting areas and trying to reach locations on people’s docks to place cargo in the most efficient way for them,” Barker said. “Sometimes, having that forward boom lets you reach places you couldn’t get to with an aft boom.”

Barker said the square cargo hold, along with large 40-foot by 80-foot stackable hatches, will also allow the mv. Mark W. Barker to carry bigger or project cargoes, like wind turbine blades.
“We’re excited that we’ll be able to, not only carry our traditional cargoes, but possibly, when needed, carry project cargoes or what we call non-traditional Great Lakes cargoes,” Barker said.

Barker said Interlake’s team of naval architects worked with Bay Engineering, also of Sturgeon Bay, for refining the design and preliminary engineering. Bay Engineering and Fincatieri Bay Shipbuilding then did the final design.

According to Interlake, the mv. Mark W. Barker will be the first laker to have Tier 4 main engines, which will be two EMD main engines that will produce 8,000 total hp. Those engines will turn a single four-blade, controllable-pitch propeller through a Lufkin twin-input, single-output gearbox. The ship will also feature 1,000 hp. Kongsberg thrusters on the bow and stern.

“We’re trying to make sure we’re adapting for the workforce of the future,” he said. “That was an important aspect for us.”

Barker said, while the ship itself is a big deal for the Great Lakes maritime industry, it also tells a good story that’s completely American.

“It’s a cool life cycle that this ship is being made from iron ore out of the Mesabi Range in Minnesota, turned into steel in Indiana by U.S. steel workers, and built by U.S. shipyard workers in Wisconsin to go back into business on the Great Lakes carrying all those cargoes,” Barker said. “This is truly an American-built and Great Lakes-built boat.”

And it’s a boat that will carry Barker’s name and represent a growing Barker family legacy with Interlake. Barker’s father, James, took the company private in 1987 and continues to serve as chairman. Two other Interlake vessels bear the name of Barker’s father and mother.

“It’s humbling,” Barker said. “It’s not something I looked for. My dad has run this business a long time, and he’s still our chairman. He said, ‘You know, we should name this boat after you, son.’ It’s kind of hard to say no to your 85-year-old father. It’s pretty humbling, and I’m not sure I’m worthy of having a boat named after me, but it’s an absolute honor.”