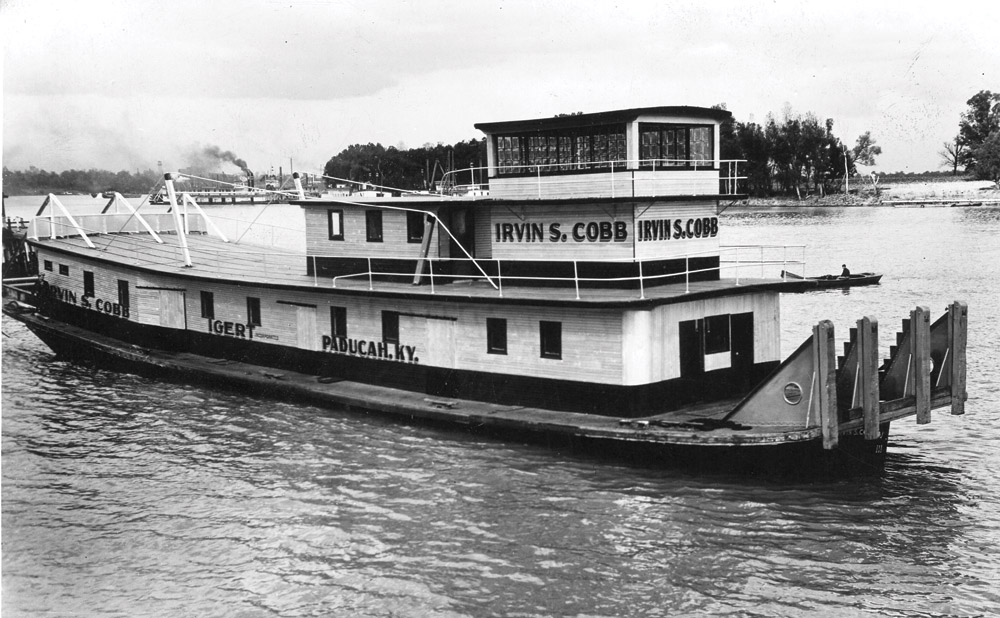 Capt. Joseph Chotin owned and operated two steam, sternwheel towboats named J.N. Pharr. The first was a wood hull vessel, 115 by 24 feet, that had been built in 1910 as the B.A. Doyle. It sank in 1912, and Chotin purchased the hull after raising, having it rebuilt and renamed J.N. Pharr. It was sold to Mexico in 1920 and reportedly sank there in 1921. Chotin replaced this boat with the packet Louise, which had been built at Parkersburg, W.Va., in 1908, on a wood hull 103 by 21 feet. He took it south, stopping at the Mound City (Ill.) Marine Ways to have it converted for towing and renaming it Jos. S. Chotin. It was later sold to the Wm. Lorimer Lumber Company of Jonesville, La.

In 1923, Chotin had a completely new boat built by Nashville Bridge Co., Nashville, Tenn., which he also named J.N. Pharr. The steel hull was 108.2 by 26 by 4.4 feet, and it had engines that were 12’s with a 6-foot stroke. Above the hull were two full cabins with a tall pilothouse on the roof, and twin smokestacks completed the looks of this trim little towboat.

According to Way’s Steam Towboat Directory, the Pharr was well-travelled, working for Lone Star Cement on the Tombigbee River, towing equipment for Intracoastal Waterway construction and then settling in as a pioneer in the towing of oil on the Cumberland River for Standard Oil. Some photos of that time show the boat sporting the Standard logo on the pilothouse. Capt. Joe Chotin was master of the Pharr during this time, and his son Capt. Scott Chotin (then in his early 20s) often served as pilot.

Eighty-six years ago this week, the boat was upbound with one load of gasoline on June 30, 1936, having locked through Lock 52 on the Ohio River. It was nearing Paducah, Ky., when a sudden wind squall caused it to capsize. Capt. J. Warren Kouns, who was aboard as a pilot, and five deckhands were lost in the accident. Both Capt. Joe and Scott Chotin were also aboard but were saved along with seven other crew members.

According to the report of the incident that appeared in the July 4, 1936, issue of The Waterways Journal, a towboat named Mary T, owned by Sangravel Company, Paducah, witnessed the Pharr capsize and rushed to the scene to aid in rescue efforts. The U.S. Engineers vessel General Craighill and a speed launch were also involved. In the July 11, 1936, issue of the Journal, the Paducah news column detailed that Capt. W.C. Lepper of Neare, Gibbs & Company, underwriters, had been on hand for salvage efforts that served to upright the vessel. The cabin and boilers had been lost, but the hull was eventually raised.

Capt. Chotin wasted no time in contracting with Nashville Bridge for another steam, sternwheel towboat. Igert Inc., Paducah, acquired the hull of the Pharr, and in 1940 it utilized the Pharr in constructing the diesel sternwheeler Irvin S. Cobb, named after the famous humorist from Paducah. The Cobb had the same hull dimensions of the Pharr but was powered by a National Superior diesel engine of 615 hp. The 1946 edition of the Inland River Record notes that the Cobb was considered the most powerful sternwheel diesel towboat on the rivers at that time.

The boat burned near Commerce, Mo., in 1941, but was soon rebuilt. In the second rebuilding the pilothouse was much higher, and photos show the boat engaged in towing automobile barges on the Tennessee River during the late 1940s. On February 17, 1950, the Irvin S. Cobb again burned, this time at Mile 17 on the Tennessee River. Notes from Steve Huffman, Capt. Bill Judd and the late Dan Owen indicate that the hull was sold to the Poplar Ridge Coal Company, St. Louis, which utilized it as a landing flat.