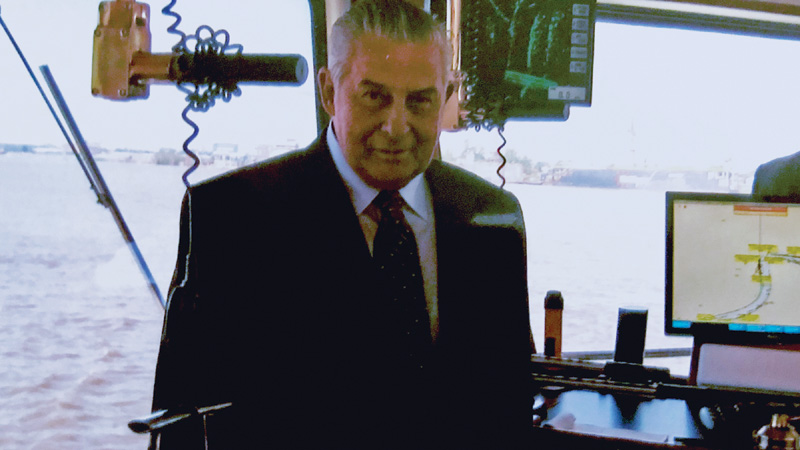 Willie Chauvin Jr., a longtime and beloved towboat captain and native of Marrero, La., died June 11 at his home in Loranger, La. He was 75.

Chauvin was born August 14, 1946, to the late Enola Estay and the late Willie Chauvin Sr. One of 12 children, he and his brother, Larry, both went into the towing industry. Chauvin got his start in the towing industry with Federal Barge Lines in the late 1960s. He also captained for Point Landing in the 1970s.

In the 1980s, Chauvin formed Marine Towing and bought a boat, which he named the mv. Lady Maria after his wife of 56 years, Maria Dufrene Chauvin.

“It didn’t work out for him, because it was a bad time in the ‘80s with push boats,” his son, Brad Chauvin, said. “But during that time, I basically grew up on the boat. When we were out of school for summertime, we’d be on the boat, me and my brother. It just stuck.

“We’d spend seven or 14 days at a time with him,” he added. “That was our time with our dad. I guess we were decking for free and running the boat for free. I started making money when I turned 18.”

After Marine Towing, Chauvin captained for Eckstein Marine and Ohio River Company through the 1990s. Brad got into the industry in 1995, when he decked for his father. Brad earned his captain’s license in 1996 and began running his own boat in 1997, relieving Chauvin aboard the mv. Harry Brendell. Chauvin retired in 2000.

Looking back over those summers on the Lady Maria and training professionally under his father, Brad said his dad was nothing short of his hero.

“He was pretty much a legend to me, as far as how he trained and how he operated with people,” Brad said. “He was hard and stern. He’d get on your butt, then 10 minutes later, he would talk to you like you were best buddies. There was always a meaning to it. As you trained with him and then later in life, you figured it out. You realized the way he operated. That’s not normal today.”

Brad, who now serves as vice president of vessel operations for Turn Services in New Orleans, attributed the professionalism and excellence of a lot of the captains in their 40s and 50s today to captains like his dad. That style of leadership, teaching and discipline may not be the norm today, but it was effective then and continues to impact the industry.

“There are two guys that work for us now that decked for him,” Brad said. “They were 18, 19, 20, working for my dad, and I was 10, riding the boat with them. When he passed away, it was like it took a piece of them, too. It was that many years since he retired, and it was still like that for them.”

Besides Brad’s 12 years as a captain and 15 years working shoreside for Turn Services, two of his cousins are still running towboats, carrying on their father Larry’s legacy as well as that of Chauvin.
“The family roots are out here still going,” Brad said.