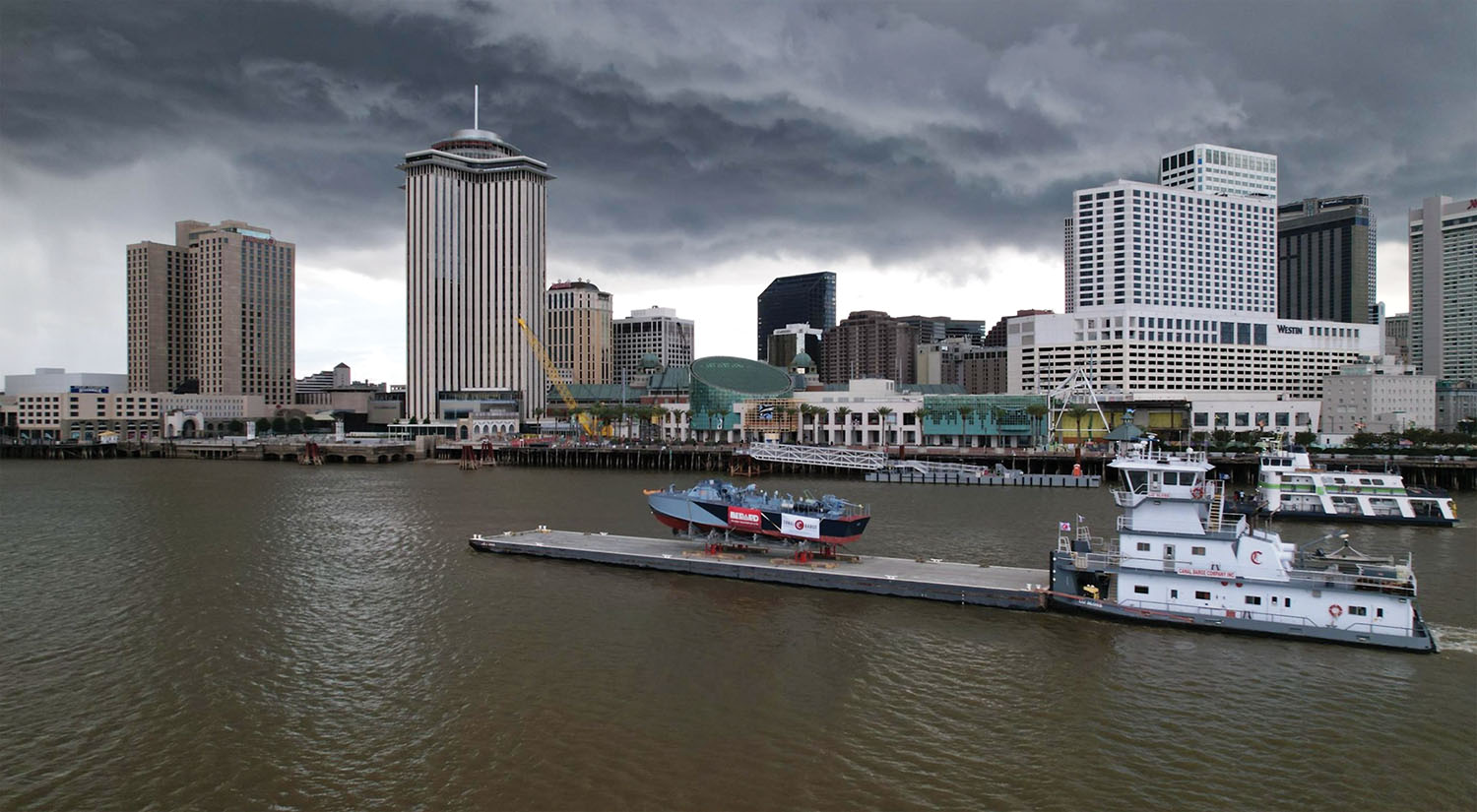 PT-305, a “patrol torpedo” built by Higgins Industries in New Orleans that served in the European theater of World War II from 1944 to the end of the war, has made its way to a new home at the National WWII Museum in New Orleans, thanks in part to the transportation services of Canal Barge Company.

After the war, PT-305, which was nicknamed USS Sudden Jerk, came back to the United States, where it spent time as a tour boat in New York, as an oyster boat and as a fishing charter, according to the National WWII Museum. At the time the museum acquired the vessel in 2007, it was drydocked and in a state of disrepair in Galveston, Texas.

Over the decade that followed, National WWII Museum staff and volunteers completely rebuilt and restored PT-305 inside the museum’s Kushner Restoration Pavilion (KRP). Then, in March 2017, the vessel was relocated to Lake Pontchartrain, where visitors had the chance to ride on PT-305 in the very waters in which it was sea trialed in the 1940s. In the early days of the COVID-19 pandemic, though, museum leadership decided to move PT-305 to storage near Seabrook on the Inner Harbor Navigation Canal.

That’s where the vessel remained until July 7, when PT-305 began its return trip to KRP, where it will be on permanent display.

Porter Randle, sales manager for Canal Barge Company’s deck barge group, got the call from Merritt Lane, the company’s president and CEO who serves on the board of the National WWII Museum, about three weeks ahead of the move. It was a familiar job for Canal Barge.

“We actually did this in 2016,” Randle said. “We donated the equipment to move it to Seabrook Harbor.”

Canal Barge tapped the mv. Liz Sloss, part of the company’s fleet that works mainly along the Gulf Intracoastal Waterway and on the Lower Mississippi River, to handle the move.

“The mv. Liz Sloss picked up the barge in Harvey, La., and transported it through the Industrial Lock to Seabrook Harbor, where Berard Transportation rolled the boat onto the barge,” Randle said. “From there, we transported the barge to the Port of New Orleans’ Erato Street Cruise Terminal.”

The project had special significance for Williams, whose wife, Aimee, a traffic manager for Canal Barge, is originally from New Orleans.

“My wife’s grandfather helped build the PT boats,” Williams said. “I served in the National Guard for eight years from ‘84 to ‘92. I loved serving my country. The military has a special place in my heart, so being part of this military move was very special for me.”

Williams said he, Hodnett and Horton split time behind the sticks as they transported PT-305 to the riverfront.

“Being able to watch it load and being a captain and safely navigating the canal, coming through the Florida Avenue and Claiborne Avenue bridges and Industrial Lock, coming out of the canal and turning it up into the river, making sure it was safe, working with Vessel Traffic and the ships, and getting it over there next to the dock—it was a special project,” said Williams, who recalled the crowd gathered along the New Orleans riverfront to see the PT boat go by. “When we came around Algiers Point, we went over there kind of close to the River Walk so people could view it coming up the river.”

PT-305 spent that night dockside on the barge.

“The next morning, Scott Stewart and his crew with Stewart Construction brought their ringer crane in to make the lift off the barge back onto one of Berard’s transporters,” Randle said. “She spent the night on the dock, and then on Saturday, with the help of Entergy, the city of New Orleans and the museum, with a police escort, moved the boat from the river to the museum.”

Randle also thanked Chad Madere and Madere & Sons Towing, who handled the prep work and ballasting of the barge, along with the U.S. Army Corps of Engineers and U.S. Coast Guard for assisting with the move.

Randle said the project reflects the strong commitment of Canal Barge Company and its owners to New Orleans, the broader Louisiana community and members of the military.

“It was a proud moment for our company to be a part of something so special and to give back to the community,” Randle said.

According to the National WWII Museum, PT-305 will undergo a few months of work to reset the boat to be on permanent display. The museum expects to open the display to the general public in early 2023.