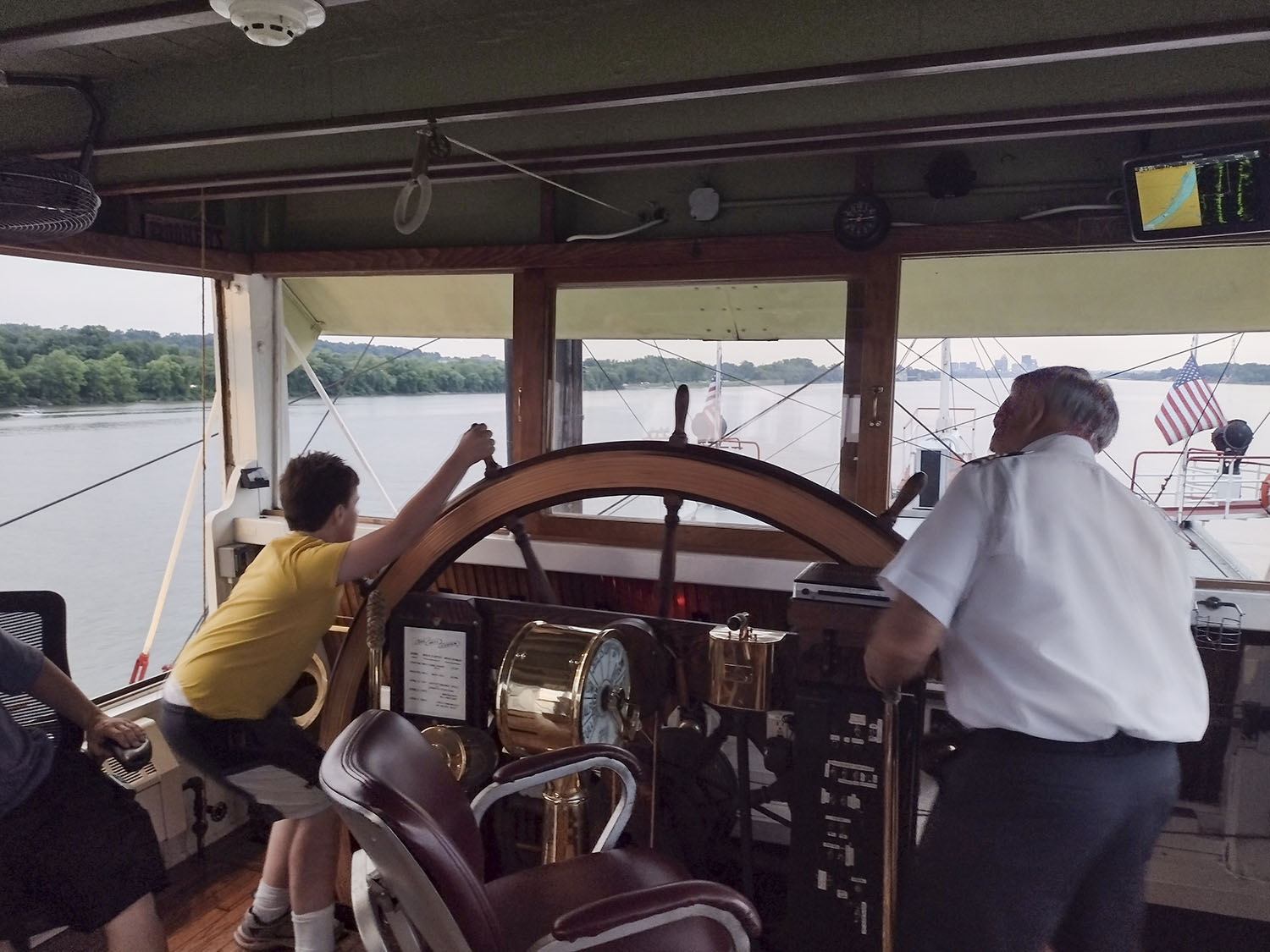 Steamboat historians can learn a lot from a trip to Louisville, Ky., and just across the river in Jeffersonville, Ind.

My family traveled to the area on both sides of the Ohio River on vacation July 2.

Our first stop was the Howard Steamboat Museum, the only museum dedicated to the history of the steamboat in the United States. The museum includes a special focus on the Howard family that built both the mansion that contains the museum and the Howard Shipyard next door. The shipyard, which operated 107 years—from 1834 to 1941—launched more than 1,100 vessels. It was purchased by the federal government just before World War II and used to build LSTs (Landing Ship, Tanks) and other vessels for use during the war. Afterward, it was sold. In 1964, it became the Jeffersonville Boat Works (Jeffboat for short), a subsidiary of American Commercial Barge Line (ACBL). Jeffboat operated as the largest inland river shipyard in the country until closing in April 2018, ending more than 180 years of shipbuilding at the site.

We began our tour of the mansion by watching a short historical video in the room that served as the Howard family’s kitchen. James Howard constructed his first steamboat in 1834 in Jeffersonville. His shipyard prospered throughout the “golden age” of the packet steamboat era from the 1870s to the late 1890s. Tragically, James didn’t survive to see much of it. He drowned in 1876 after his horse and carriage rolled off a ferry boat and into the river below.

Fourteen years later, in 1890, his son, Edmonds, who had taken over the shipyard, began construction on a 22-room Romanesque mansion next door. Museum director/curator Travis Vasconcelos told us that the mansion was the idea of Edmonds’ wife, Laura, who said Edmonds could show off the mansion to potential customers when they didn’t have a boat that was available to tour. The shipyard workers built the entire mansion, using the same care and detail they gave to the family’s famous boats. The shipyard’s master carpenter, Ernst Hofman, a German immigrant, used 15 different kinds of locally sourced lumber throughout the home, Vasconcelos said. He used no advanced power tools, carving each decorative element by hand. More than 80 percent of the furniture inside the mansion is original to the family, with about 60 percent being purchased at the World’s Columbian Exposition (commonly called the world’s fair) in Chicago in 1893. In December 1894, the Howard family moved in. Unfortunately, the age of the steamboat was on its way out as the railroads gained prominence.

It was the dying wish of Edmonds Howard’s younger son, Capt. Jim Howard, in 1956 that the house become a museum dedicated to the Howards and their influence on the river industry. Jim’s widow, Loretta, worked to fulfill that wish, opening the museum in 1958 and operating it until 1970, when her health no longer permitted her to do so.

Two events significantly damaged the home. The flood of 1937 left 7 feet, 1 inch of water in the famous home’s Moorish parlor, destroying the Steinway piano. A fire in 1971 nearly destroyed the mansion, which was saved in part because the walls of every room except the den were built three bricks thick, and the rooms were separated by pocket doors, helping to contain the fire’s spread, Vasconcelos said. The community rallied around the museum, and it reopened in less than a year.

Following the video, Vasconcelos led our tour of the main floor. We self-guided through the other two floors.

We began our exploration in the den, which was Edmonds’ room to relax. Located there is a gilded statue of an eagle, which was originally from the steamboat Calhoun. In the library, the upholstered armchair is from the steamboat John W. Cannon and includes the monogram JWC. The three-story grand staircase is similar to the staircase of a classic riverboat and is made of black walnut.

Second-floor ties to the steamboat community include a cabin arch from the steamer Rob’t E. Lee, found in the center hallway, and original tools from the shipyard displayed in the founder’s room. A middle room features models and steamboat artifacts. A cabin door from the Rob’t E. Lee is displayed on the wall.

While the main and second floors are generally decorated the way they would have been when the Howard family lived there, the third floor is dedicated to displaying more maritime exhibits and artifacts. This includes a collection of steamboat whistles as well as exhibits focusing on modern steamboats, including the Belle of Louisville, one on the LSTs and one on aspects of modern river life and commerce. A highlight is a scale dioramic model of the McAlpine Lock and Dam system, located just downriver from the mansion.

Outside, we took time to see the sternwheel shaft with cranks and flanges that drove the paddlewheel of the steamer Delta Queen until the shaft fractured in the 1980s. When fully assembled, the entire paddlewheel weighs 42 tons. We also pulled the rope to clang the enormous (and loud!) bell made in July 1976 for The Mississippi Queen.

After lunch and candy at the 130-year-old Schimpff’s Confectionery, also in Jeffersonville, we traveled back across the Ohio River and checked into our hotel in Louisville. Soon it was time for our sunset voyage on the iconic steamboat the Belle of Louisville.

The Belle of Louisville is the only remaining authentic steamboat of the American packet boat era and the most widely traveled steamboat in U.S. history. It was designated as a National Historic Landmark in 1989 and is also listed on the National Register of Historic Places. We soon boarded the vessel, and we were met by Capt. Mike Fitzgerald. He would be our tour guide and piloted the boat that evening.

After introducing himself, Fitzgerald showed us to the boiler room, where Roy Betts was busy lighting the three boilers that would provide steam to power the steamboat. The boilers, Betts told us, are capable of holding as much as 6,500 gallons of water. Water from the surrounding river is pumped through a series of pipes and drums, eventually flowing into the boilers. The fires that provide heat for them were originally fueled by coal, but now are diesel-powered.

Originally known as the Idlewild, the Belle of Louisville was built in 1914 in Pittsburgh, Pa. It began operation as a ferryboat, transporting people and goods across the Mississippi River at Memphis, Tenn. The Idlewild became an excursion vessel for people seeking rides across the Ohio River at Louisville in the late 1920s and 1930s.

In World War II, the steamboat was fitted with new equipment allowing it to tow oil barges along the rivers. After the war it was sold and renamed the Avalon and once again used as an excursion vessel.

Jefferson County Judge Marlow Cook bought the boat for $34,000 in 1962, renaming it the Belle of Louisville. Following extensive renovation, it once again began carrying passengers on the Ohio River in Louisville.

How The Belle Works

After telling us the lengthy and unique past of the steamboat, Fitzgerald led us to the engineroom, where the steam from the boilers is transferred into energy used to power the boat. He told us that the Belle, unlike in the past, does not normally rely only on steam to operate. Two diesel engines power on-board electrical systems and air conditioning. The vessel holds as much as 22,000 gallons of fuel, consuming around 150 gallons per hour at top speed. However, unlike other steamboats similar to the Belle, it can run completely on steam power if the need were to arise. The two steam engines are actually older than the Belle itself, having been used when put on the boat. They date to around the mid-1880s.

The steam from the boilers is carried along many different pipes, where it is used to push pistons that turn the big, red, wooden paddle wheel at the stern. Exhaust gases exiting from the engines are used to power three different pumps, which pump water from the river to the boilers. In this way, if two pumps were to fail, one would still be able to operate.

We climbed a staircase from the main deck to the boiler deck, which includes an air-conditioned space containing a dance floor and concessions. From the boiler deck we continued climbing to the open-air hurricane and texas decks.

Finally we reached the pilothouse, which is situated atop the roof. While there, Fitzgerald showed us the 6-foot wooden wheel – original to the boat – which has handles protruding from the spokes for steering. He let me turn the wheel, and I found I had to use all my might! Fortunately, two levers were installed that the pilots use to hydraulically turn the wheel with ease. Among the other modern installments are a display equipped with a radar, a global positioning system and a cellular telephone, all of which are for navigation.

While we were touring the pilothouse, we could hear the steam-powered calliope clearly. The Belle’s calliope contains 32 whistles, each of which emits a note with a slightly different pitch than the other whistles. The whistles are controlled by a player at a keyboard in order to produce music. We listened as the calliope played “America the Beautiful” and “My Old Kentucky Home.” Some songs were not as historic as the Belle. I heard the theme to “Star Wars,” one of my favorite series of movies, too.

My family and I returned to the decks below for our two-hour voyage, briefly returning to the pilothouse to take in the breathtaking view of Fourth of July weekend fireworks from there. Capt. Fitzgerald also helped me to stomp on a pedal to blow the Belle’s whistle.

We were reluctant to exit the mighty and historic steamboat, but finally bid the Belle good night. I will never forget everything that I learned about steamboats and experienced riding one, all  in one day during our family’s trip to Louisville and Jeffersonville.

Editor’s Note: Drew Byrne is 12 years old and lives near Paducah in far western Kentucky. He is the son of Paul and Shelley Byrne.

Caption for top photo: Drew Byrne, 12, strains as he turns the Belle of Louisville’s original wooden wheel while Capt. Mike Fitzgerald keeps a steady hand on the lever. (Photo by Shelley Byrne)