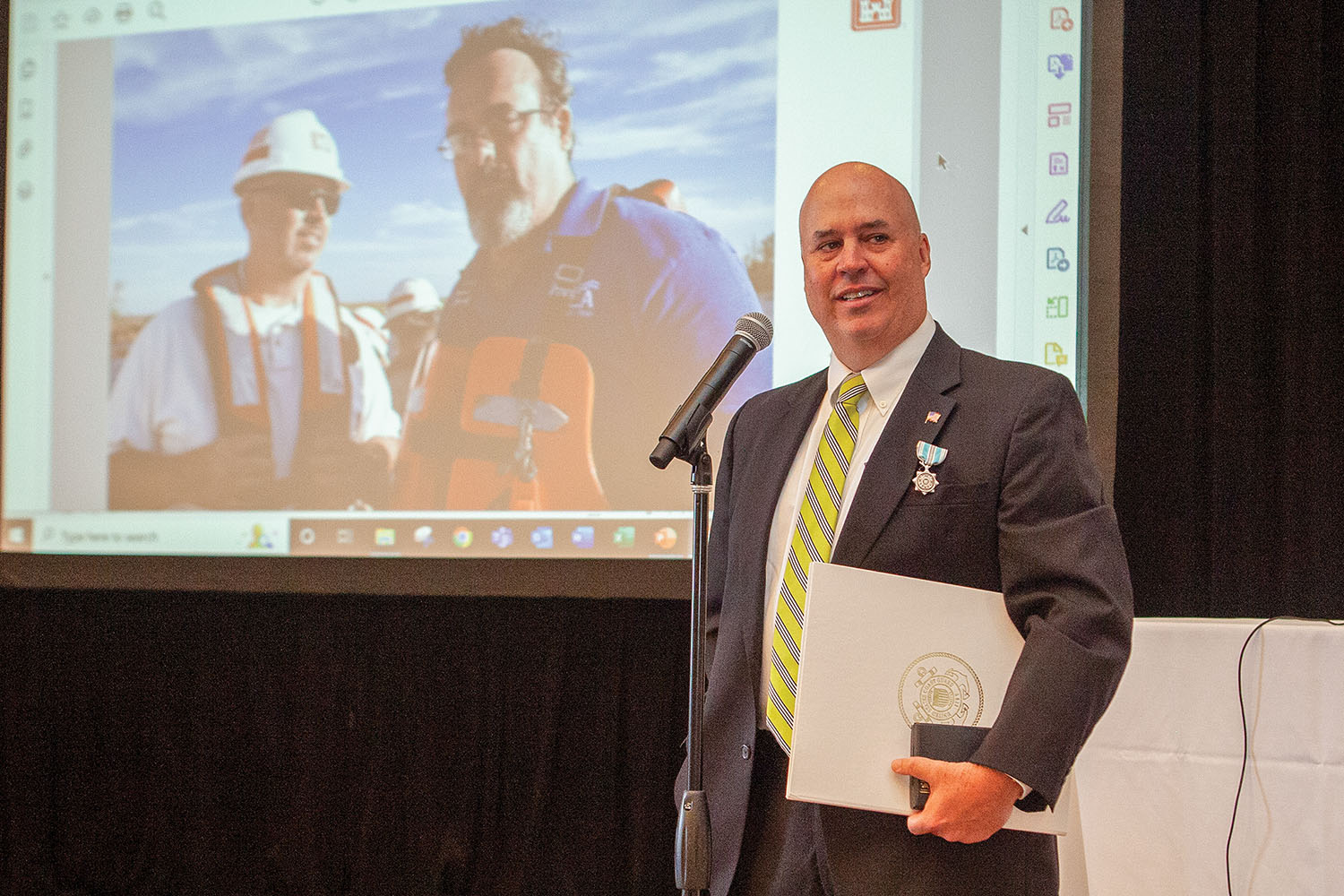 After Hurricane Ida made landfall on August 29, 2021, near Port Fourchon, La., the storm slowly churned inland over the coastal communities and marshes of Southeast Louisiana, eventually crossing the Gulf Intracoastal Waterway (GIWW) and, later, the Mississippi River.

As Ida moved inland, the storm’s counter-clockwise rotation dislodged an enormous amount of silt and vegetation from the marsh south of the GIWW and deposited it in the canal and in Lake Salvador to the north. The result: the GIWW was rendered impassable for commercial traffic between Miles 18 and 33 (west of Harvey Lock).

Immediately after the storm passed, representatives from the New Orleans Engineer District, led by Vic Landry, operations manager of the GIWW, deployed to assess impacts to the waterway and craft a strategy for reconstituting the waterway.

Landry reflected on that operation—which resulted in the waterway reopening to navigation 64 days later on October 31, 2021—at the annual seminar of the Gulf Intracoastal Canal Association (GICA), held August 3–5 in New Orleans. Landry emphasized teamwork and communication between the Corps, the U.S. Coast Guard, industry and contractors.

“The biggest thing is collaboration from start to finish,” Landry said. “We worked together. We’re a big team, and I feel like we were successful. It was 64 long days of a major channel closure, but we were able to address it efficiently.”

Landry and his team conducted a flyover two days after the storm. The canal around the Inner Harbor Navigation Canal and Algiers locks was in good shape, Landry said.

“As we proceed [west], things are looking pretty good until we hit Lafitte,” Landry recalled. “That’s when we realized, as we were flying closer to the path, there was going to be destruction.”

By September 1, a Corps survey vessel was scanning the waterway. In addition, industry representatives began gathering surveys in the vicinity. In that 12- to 15-mile area, the team found just 7 feet of draft, in an area that typically has 12 to 15 feet of draft.

It wasn’t just silt in the channel. There were trees and utility poles, along with something called “flotant” or “la prairie tremblante,” which translates as “trembling prairie.” Flotant is a type of marsh that floats but is anchored or tethered to the marsh bottom.

“All this stuff broke loose and was pushed north in the surge, all into the waterway and Lake Salvador,” Landry said. “There’s every kind of debris you could imagine, but I had never dealt with this flotant material.”

To tackle the floating material, the Corps mobilized the Vicksburg District’s mv. Fred Lee with its heavy-lift crane, the Big Juicy. That plant, along with Corps and contracted assets, set out to clear a pilot channel through the closed section of the GIWW. Simultaneously, Landry’s team engaged dredging contractor Weeks Marine to mobilize the cutterhead dredge Capt. Frank, along with a smaller dredge. The plan was for the two dredges to start at opposite ends of the shoaled area and work toward each other. The Capt. Frank was mobilized by September 15.

The operation wasn’t easy, Landry said, with vegetative material in the channel constantly clogging the cutterheads.

All of this activity, Landry said, came with a cost of about $15 million in emergency funds. Fortunately, that funding was quickly made available thanks to support from the district and division levels, along with industry backing.

“We were able to get those funds quickly and efficiently,” Landry said, “and everybody in this room, your input definitely helped out.”

Landry estimated that, over the next six weeks, the dredges working to clear the channel moved 1 million cubic yards of material.

Landry said that, with tidal flows continuing to move material in and out of the channel, the dredge team and the Big Juicy made several additional passes just prior to the channel reopening to ensure that, once the channel opened, it would remain open. Everything was done with constant communication between the Corps and industry and with the knowledge that the extra 174 miles needed to bypass the closed portion of the GIWW was costing industry time and money.

“Thank you all for your patience during those 64 days,” Landry said. “Having to use the alternate route, I know it wasn’t easy. It was painful. It was expensive with rising fuel costs. But thank you for bearing with us, because I think it was a success story in the end. This could have easily gone on for three months, and I feel like 64 days was a win for all of us.

“This is what we deal with every year,” Landry added. “The biggest thing I can say is remain vigilant in 2022, because we’re really only approaching the height of the season and our success moving forward is in our partnership.”

“Demonstrating vast knowledge in crisis response, dredging and contracting, Mr. Landry leveraged decades-long working relationships with a panoply of maritime stakeholders to employ a broad array of response assets,” Dittman said, reading the award narrative. “His tireless efforts, collegial demeanor and forthright conveyance of information garnered immense trust and confidence among responders in the marine industry reeling from the debilitating effects of the waterway closure.”

Overcome with emotion, Landry shared with the crowd why the Ida response and the surprise award was especially meaningful.

“This event was challenging,” he said. “It was exhilarating, and it is still rewarding. And in the middle of this thing, I lost my father.”

Landry’s father, Victor A. Landry Jr., died at his home on September 4, 2021, at the age of 87. The elder Landry, a U.S. Air Force veteran, retired from the U.S. Army Corps of Engineers with more than 36 years of service. He worked as a general design engineer, emergency operations manager and flood control engineer in the New Orleans District’s operations and readiness division. He worked directly with the district’s recovery work after hurricanes Hilda (1964), Betsy (1965), Camille (1969) and Carmen (1974), along with the Mississippi River flood fights of 1973, 1974 and 1975. He later served as CEO and adviser to the district commander.

He retired and subsequently served on a local levee district board. Then, after Hurricane Katrina flooded New Orleans in 2005, the elder Landry returned to the Corps, where he helped in the planning, design and construction of the region’s Hurricane and Storm Damage Risk Reduction System (HSDRRS). He retired for the last time in December 2009.

Landry said after Hurricane Ida passed, he set up a generator and a window unit in a bedroom at his parents’ house to keep his father, mother and one of his sisters cool while the city was without power. His father was on hospice care and wasn’t able to evacuate.

“He couldn’t leave, nor did he want to leave,” Landry said. “He explicitly said, ‘I want to be home.’”

At the time, with Landry’s wife and children in Lafayette, La., he was sleeping at the New Orleans District’s headquarters. Each evening, when he would finish his emergency response efforts for the day, he’d drive to his parents’ house to spend time with his dad.

“I’d go visit with my dad for a couple of hours every evening that week,” Landry said. “I knew it was close, so I wanted to spend as much time with him as I could.”

Landry said, for his dad, “the Corps was his life” and that he was especially proud of the work he put in on the post-Katrina system of levees, flood walls, gates and pumps. When he was visiting with him on Friday, September 3, 2021, Landry was sure to tell his father how well the system served the city.

“I said, ‘Dad, you’d be so happy and proud of everything you’ve accomplished and the Corps has done,’” Landry said. “‘The system performed like a champ and weathered the storm as designed.’ He smiled and just squeezed my hand. At that point, he wasn’t communicating much, so I know he heard me, and he expressed his joy and relief. Then he passed the next day. It was almost poetic.”

Landry, who spent 10 years in the private sector before joining the Corps, said he, like his father before him, treasures his time with the Corps and the way it allows him to serve the mission, the community and the maritime industry. All those things he saw in his dad.

“I’ve been blessed to have him as my hero,” Landry said.

And while it was painful to lose his dad, especially in the midst of the Hurricane Ida recovery operation, Landry said it steeled his resolve and determination to restore navigation on the GIWW.

“I knew what he’d want me to do,” Landry told the GICA crowd, “and it was to get through this, get the waterway open, and to work with all of you great people. Thank you so much. I love you.”

Caption for photo: Vic Landry, operations manager of the GIWW, speaks to the GICA crowd after receiving the Coast Guard Meritorious Public Service Award. Landry and Paul Dittman, GICA president, are pictured together on the screen during Hurricane Ida recovery operations. (Photo by Frank McCormack)