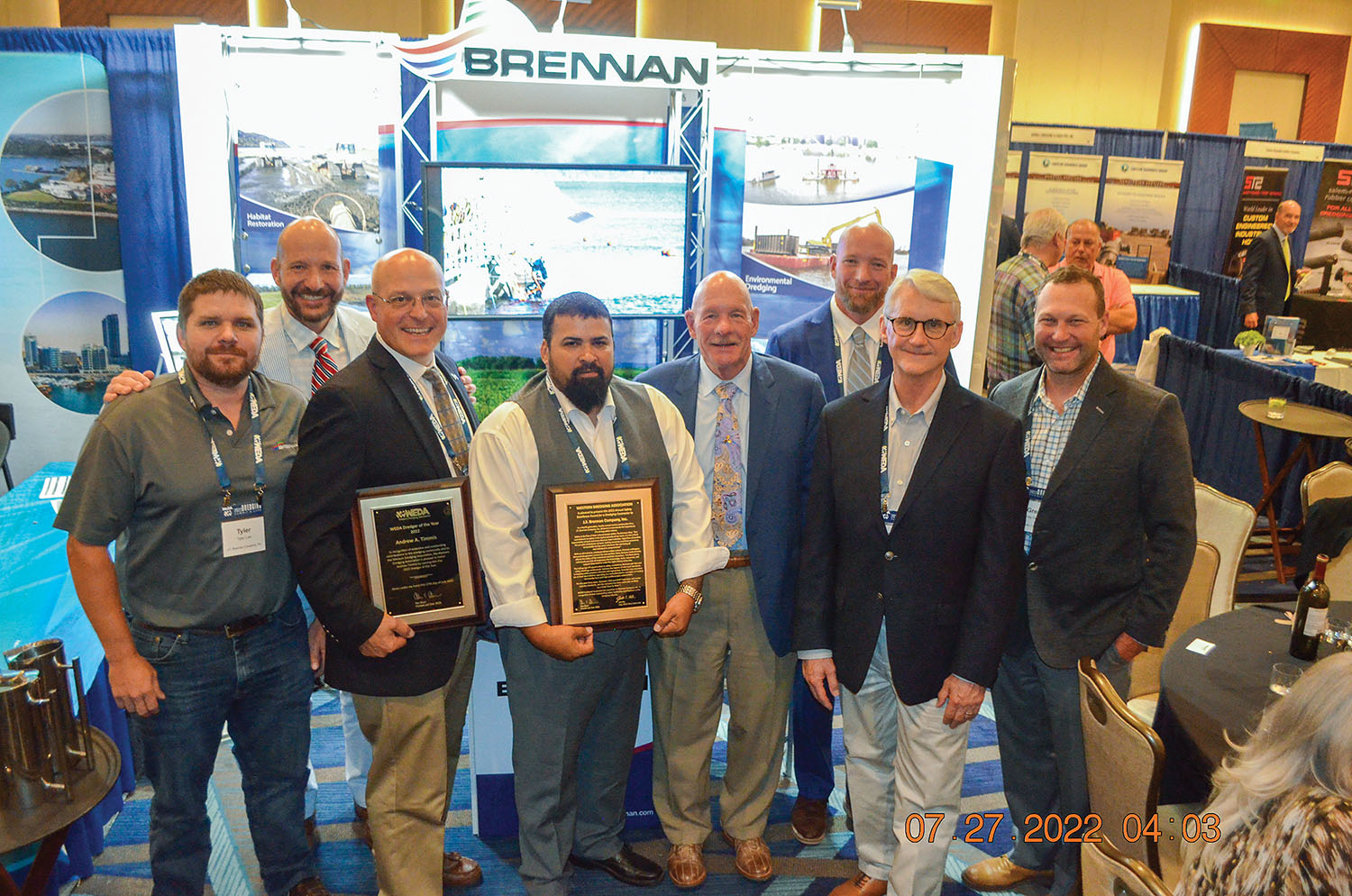 The Western Dredging Association drew a record 780 attendees and nearly 150 exhibitors to its annual Dredging Summit and Expo July 25–28 at the Marriott Marquis Houston.

The enthusiastic support of the event mirrored the robust dredging industry, backed by unprecedented federal and local funding levels and the need for dredging in the navigation, aggregates and environmental dredging areas.

The logos of the 72 financial sponsors of the meeting and 73 sustaining members were displayed on large boards above the speaker’s platform in the exhibit hall where plenary sessions and meals were held. In his welcoming address prior to the opening plenary session, WEDA President Alan Alcorn said that this meeting had the most booths and most attendees of any event ever held by WEDA since its inception in 1979.

In 2020, after that year’s meeting had been planned and organized, the board of directors decided to postpone it in view of the rampant COVID-19 pandemic. When the hotel refused to refund the substantial down payment, Executive Director Thomas Cappellino negotiated an agreement whereby the down payment be transferred to the 2022 meeting in exchange for a promise to use a Marriott property for at least two events in the next four years, which, in Alcorn’s words, saved the organization.

When this meeting, planned for 400 attendees and far fewer exhibits, doubled in size, Cappellino arranged the increased services with the hotel on an ongoing basis, enabling a seamless accommodation of the new numbers.

The first keynote speaker, Col. Rhett Blackmon, the new chief of the Galveston Engineer District, gave a detailed description of the many dredging projects and coastal protection plans in the district, which spans the Texas Coast from Louisiana to Mexico and includes 50,000 square miles of Texas and some of Louisiana.

Among the projects he described are the deepening of ship channels in Houston, the Sabine-Neches, Freeport, Corpus Christi and Brazos Island Harbor in Brownsville, and the accompanying investment in dredging equipment by private dredging companies, including Callan Marine’s six new dredges in the past seven years, and the move by Great Lakes Dredge & Dock’s (GLDD’s) headquarters from Chicago to Houston.

Addressing the future following the capital dredging projects, Blackmon charted the increased operations and maintenance work required in the deeper channels in decades to come. He described the Coastal Texas Project, a plan for storm protection, which is expected to be authorized by Congress.

The second keynote speaker was Lasse Peterson, president and CEO of GLDD, who welcomed Blackmon to GLDD’s hometown. He outlined the prospects the company sees in the Houston area, including investment in new equipment and participation in the critical issues addressed by WEDA, especially safety. He credited GLDD Chief Operating Officer Dave Simonelli with instigating and promoting an industry-wide awareness of safety, especially aboard dredges and on jobsites, extending to company buildings and meeting places.

Richard Byrnes of the Port of Houston addressed the Tuesday luncheon group with the theme “When Patterns Change, New Worlds Emerge.” Either it happens or you make it happen, he said. With the changing world, we have to do more with less, he said, echoing a phrase that was used often throughout the conference. He used this theme to describe the planning of the latest channel deepening in Houston, dubbed Project 11 because this is the 11th overall deepening of the navigation channels in the history of the port. The team got the feasibility study and plan finished in record time, with the dredging projects now well underway.

The mission statement of Houston is “Move the world, drive regional prosperity,” he concluded.

Col. Jeremy Chapman of the Mobile Engineer District addressed the Wednesday luncheon group on the varied activities in his district, including the new 54-foot navigation channel into the harbor, dredging in the Tennessee-Tombigbee Waterway, deepening of the Gulfport Harbor and a call by the Panama Canal Commission for help in designing their 50-foot channel. Mobile also hosts the DQM (dredge quality management) Center of Expertise, which helped during the COVID-19 pandemic by showing how DQM could operate from home or from any COE office.

At the mid-day meeting on Tuesday, awards were given for “best papers,” for environmental excellence, for project safety and for other successes. Environmental Dredging is a distinct category in which the primary purpose of the project is for environmental remediation.

For a Navigation Dredging Project: to the U.S. Coast Guard, the U.S. Navy and WOOD Environment and Infrastructure Solutions for development of multi-purpose habitat from repurposed pier demolition rubble and maintenance-dredged sand at Ballast Point, San Diego, Calif.

Randy Steed and Jos Clements received the 2022 Safety Excellence Award for a Dredging Project to Roen Salvage for a deepening project at Marinette, Wis., involving rock removal through 1,500 hole blasts in a confined area, with no misfires, lost-time accidents, or injuries.

The Safety Excellence Award for a Dredging Contractor was presented to the J.F. Brennan Company for its company protocol called The Brennan Way, spelled out in dozens of “keys to success” in Brennan’s mission: “Our commitment to safety is the highest priority of our work.”

The Young Professional Award was given to Teal Dreher of Floyd Snider. This award is to a member under 35 years of age who has distinguished him- or herself in the dredging industry through contributions to WEDA and the dredging industry. Dreher has been an active participant in WEDA since 2012. She is a WEDA Pacific Chapter board member and a senior engineer at Floyd Snider.

There were more than 100 technical papers presented in 19 categories/sessions over 2-1/2 days. Three papers received awards for technical excellence and relevance.

Walter Dinicola presented Kristen Ewert of Moffatt & Nichol with the $500 Anchor QEA Young Author Award for “A Study of Emissions and Dredging Efficiencies at Vancouver Fraser Port Authority.” In the past year, Ewert has been the dredge lead for the sustainability study conducted by Moffatt & Nichol for Vancouver Fraser Port Authority and presents the recommendations of the study in this paper, which evaluates the effectiveness of available technologies available to the Port of Vancouver.

The $1,000 Moffatt & Nichol / WEDA Best Paper award went to Benjamin Emery, Magdalena Asborno and Kenneth Mitchell, all of the Corps of Engineers, for “USACE Expanded Use of Archival Dredging Data.” The team has undertaken efforts to mine archival dredging data from the Resident Management System, which houses daily dredge production totals, haul distances/pipeline lengths, cycle times, weather conditions, fuel usage, effective working times and much more. The paper includes analysis of historic trends in the Gulf, Atlantic and Southeast regions. These data will allow the Corps a better understanding of the potential for weather and seasonal delays and how this might influence the scheduling of contracts as well as data to better inform environmental risks and stakeholders’ contract schedule concerns.

Dredger Of The Year

This year’s Dredger of the Year is Andrew Timmis, who is director of business development for the J.F. Brennan Company Environmental Group, based in the Greater Boston area, and has contributed to the education of the industry through workshops and classes.

The Lifetime Achievement Award went to Paul Fuglevand. He was a founding partner of Dalton, Olmsted & Fuglevand Inc. in 1989, and he continues to research and publish his findings. He is a licensed professional engineer in multiple states.

The organization recognized the work of several individuals for their work in assembling the WEDApedia project, an exhaustive glossary of dredging terms available on the westerndredging.org website under Publications. Those honored were Carol Shobrook, Marsha Cohen, Madeline Lemings and Judith Powers, who received plaques in gratitude for their work.

Alcorn mentioned Women of WEDA (WOW), which provides networking and discussion among women members. Kathryn Thomas took an idea posed in a conversation at the meeting in Norfolk in 2017 and arranged the first WOW breakfast at the Chicago meeting the following year. The group now has a newsletter and well-attended gatherings.

The event ended with a business meeting where the change of officers occurred. (A peaceful transfer of power, Alcorn quipped.) Matt Binsfeld, formerly vice president, advanced to president. Carol Shobrook, previously secretary, advanced to vice president; Lori Burnell joined the officers as secretary, and Walt Dinicola agreed to another term as treasurer.

The Best Exhibit award of $500 was given to Hägglunds for their exhibit of a full-sized operating cutaway of a hydraulic motor.