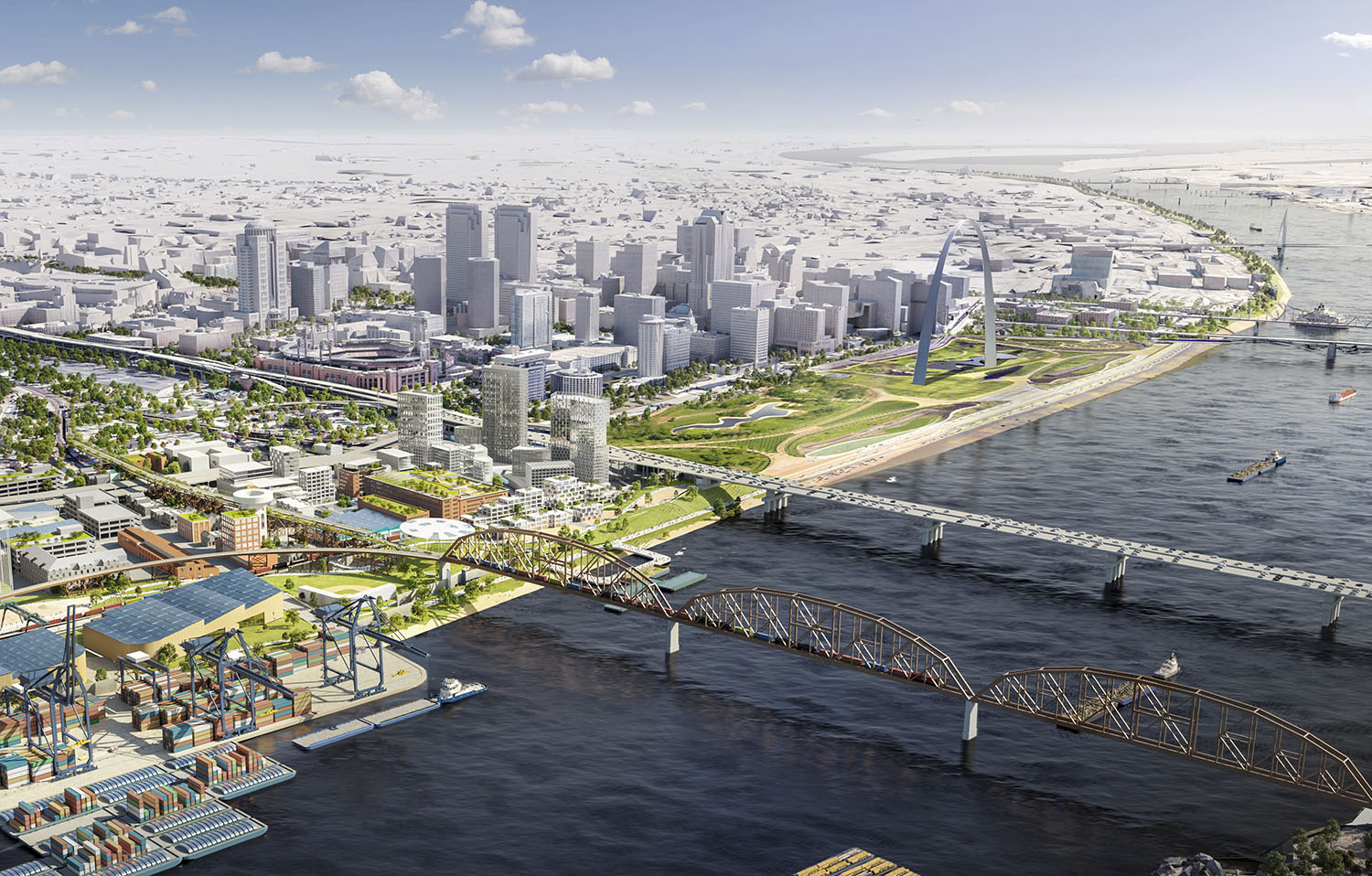 At its August 11 meeting, the St. Louis Port Authority Commission approved a resolution authorizing the port authority to enter into preliminary planning with Good Developments Group to evaluate a mixed-use development on and near the Mississippi River waterfront in an area just south of the St. Louis Arch grounds that could incorporate barging components.

According to documents filed with the city, Good Developments Group owns or controls 50 acres of the proposed 80-acre development area. It is calling its proposed development project Gateway South and estimates total costs at $1.2 billion. A proposal document submitted by Good Developments describes the project area as “a large, mostly currently vacant area just south of the St. Louis Arch.”

A concept rendering submitted as part of the proposal shows container cranes on the redeveloped waterfront loading containers onto barges. Nicki Adler, a spokesperson for Good Developments, told The Waterways Journal that barge transportation is “central to our, still preliminary, plans for this project, which we hope will transform the front-door entrance to St. Louis and establish a geographic hub for progressing the ‘Built Environment Industry.’”

Adler added, “Unlike most industries, the ‘Built Environment Industry’ has no geographic hub for innovative thinking, collaborations and synergistic process efficiencies to take place. There is a need for a strong industry cluster and partnership between construction, design and manufacturing in order to foster innovation and adopt new practices.”

She said that project planners were aware of the importance of direct access to low-cost barge shipping via the Mississippi River, with access to cities including Chicago, Minneapolis, Cincinnati, Pittsburgh, Louisville, Kansas City, Nashville, Memphis, Little Rock, Baton Rouge, New Orleans and Houston. “The site’s location lies where river, rail and road converge, allowing for efficient transportation of materials–including componentized construction materials–into and out of St. Louis.”

The commission approval is a first step in what promises to be a long process with many steps. The developers say that, if all goes ahead with no glitches, the project would take about 10 years to complete.

Part of the 80-acre parcel of riverfront land is known as Chouteau’s Landing; another part is called the Kosciusko neighborhood, named after a Polish veteran of the American Revolution. The waterfront already contains several barge fleeting areas.

The three-part August 11 resolution states the intent of the port authority to cooperate with Good Developments Group to develop the Gateway South project. It authorizes a preliminary funding agreement with the group whereby the developer will pay the port authority’s and city’s costs of negotiating a further agreement relating to the development of and incentives for the Gateway South project, which according to local media sources amount to an initial $25,000.

Finally, it authorizes port authority staff and attorneys to actually negotiate the development agreement and present it for the board of commissioners’ future consideration.

In its presentation, the developer described a mixed-use project that would include a “design and construction innovation district” with a pair of factories tied to component manufacturing and a business accelerator for start-ups, a recreational and residential district with two residential high-rises and other housing and an entertainment district.

No names were attached to potential tenants, but the consultants said they were in talks with San Francisco and New York-based firms for the factory elements, according to Spectrum News.