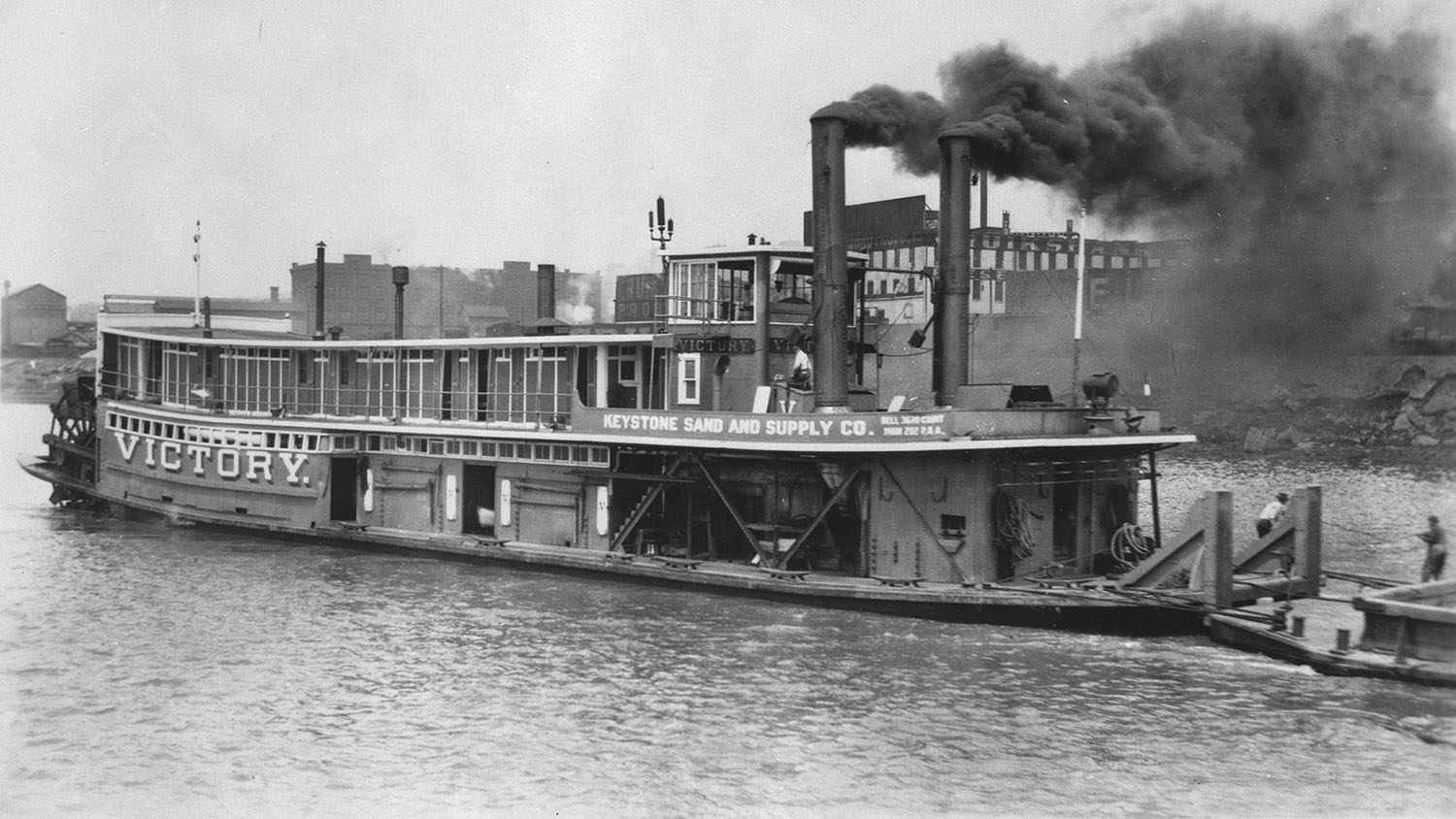 In 1919, Dravo Corporation built two steam sternwheel towboats in their yard in the back channel of Neville Island (Pa.). The boats were essentially sister vessels with one being the Warren Elsey for Jones & Laughlin Steel Company and the other built for a Dravo subsidiary, Keystone Sand & Supply of Pittsburgh. This would be the first of three boats named Victory that Keystone would operate.

According to A Company of Uncommon Enterprise, a Dravo publication detailing the history of the company, Keystone Sand & Supply was formed in 1902 by the Dravo brothers, Francis R. “Frank” and Ralph M., to ensure a reliable source of aggregates for their construction company as well as to establish control over the quality and cost of the materials. In 1916, Dravo had experimented by building the steam twin-prop towboat Peace for Keystone, but the Victory of 1919 was a traditional sternwheel boat with a steel hull 135.7 by 27 by 5.6 feet. It had condensing engines 14’s, 30’s – 6-foot stroke rated 440 hp. The four return-flue boilers burned coal.

Way’s Steam Towboat Directory says that the Victory was christened on March 28, 1919, by Betty Dravo, daughter of Ralph M. Dravo. The boat went to work towing sand and gravel in the Pittsburgh area. In September 1924, it was taken to the Dravo shipyard at Neville Island, where it was lengthened to 141.2 feet. In 1931, it was chartered for a time to the Koch-McBride Towing Company and towed coal from the Kanawha River to Louisville with Capt. Roy McBride as master.

While Keystone Sand had been advertising the boat for sale as early as 1934, in the summer of 1939 the Victory was sold to O.F. Shearer & Sons, Cincinnati, Ohio, and they renamed it O.F. Shearer in 1940. As the O.F. Shearer, it regularly towed between the Kanawha River and Cincinnati, delivering coal to area power plants. Way’s states that in October 1941, the crew aboard included Capt. Oliver Shearer, master; Kennet Rhea, pilot; Louis Faudree, chief engineer; Hugh Dourthey, second engineer; and Lee Birchfield, mate.

Capt. Bert Shearer served as master quite often, and in Sternwheelers On The Great Kanawha River by Gerald Sutphin and Richard Andre he is quoted as saying “She was a good handler but a poor backer.” This book has several great photos taken aboard the boat and showing the crew at work.

There is also a wonderful photo of it on page 205 of Edwin and Louise Rosskam’s Towboat River, taken as the Shearer was flanking around Oak Forest bend while departing Winfield Locks downbound on the Kanawha River.

While the O.F. Shearer was making a downbound approach to the Winfield locks with six coal loads on January 2, 1945, the tow was caught by the outdraft, and the boat had to be turned loose, allowing the loads to go through the rollers of the dam. In 1951, the boat was dismantled at the Shearer landing at Cedar Grove, W.Va., on the Kanawha.

The name wasn’t absent from the rivers for long, as in 1952 the Shearer concern purchased the 2,000 hp. twin-screw diesel Patriot from American Barge Line, and in June 1953 it was renamed O.F. Shearer.