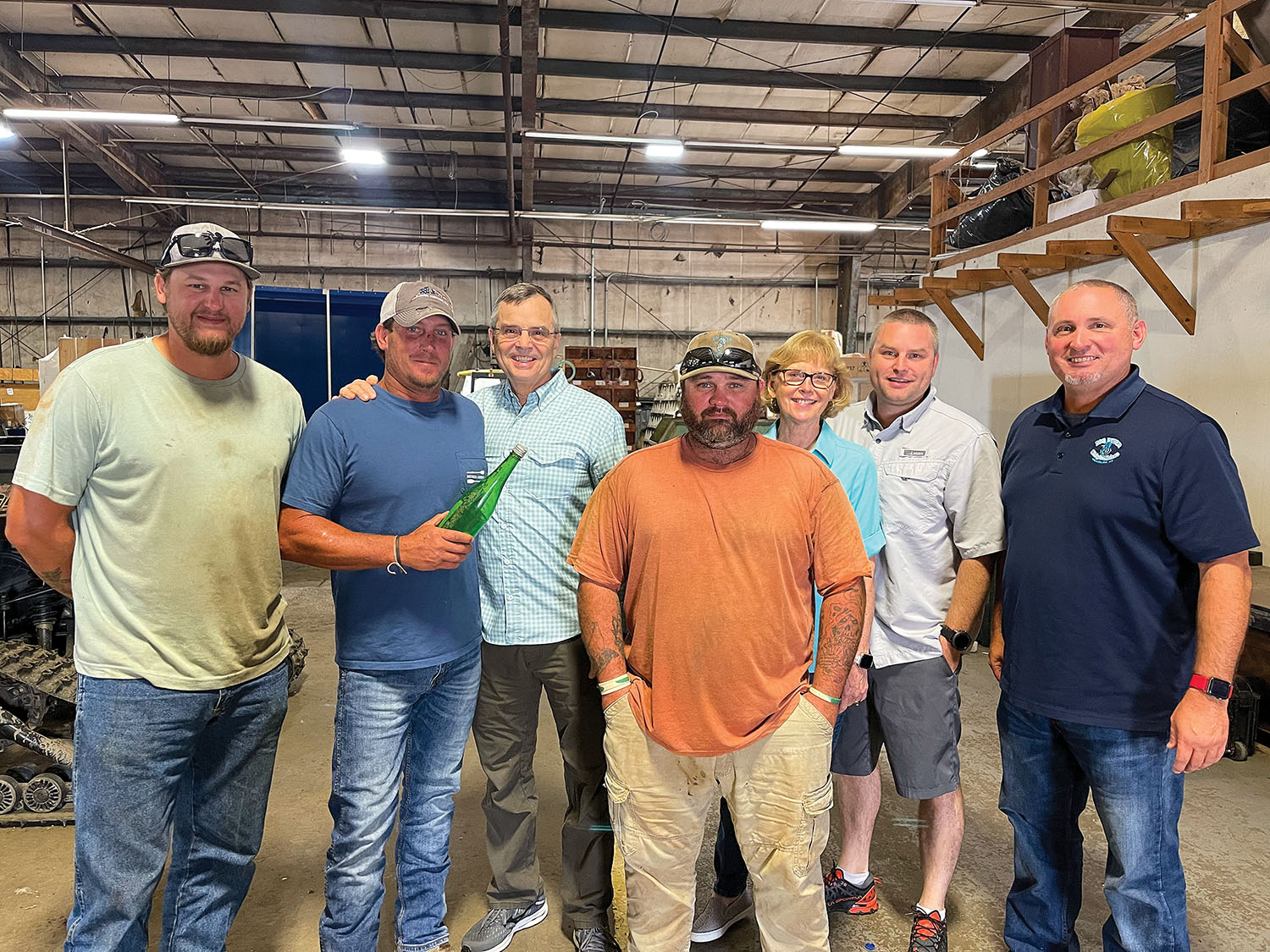 Family Reconnected With Son’s Message In A Bottle, Thanks To Shipyard Workers

Thirty-three years ago, students in Martha Burnett’s sixth grade class penned handwritten letters, rolled them up, slipped them into bottles and sealed them with wax. The classmates later field-tripped from Oxford, Miss., to below Sardis Lake and tossed the bottles into the Tallahatchie River.

This past spring, more than three decades later and a few hundred miles downstream, a letter penned by one of those students turned up on April 5 at rest atop a dredge float in the Yazoo River Diversion Canal in Vicksburg, Miss. A team from Vicksburg-based Big River Shipbuilders was salvaging the dredge float, which is akin to a small barge. Billy Mitchell, a salvage diver and surveyor with River Services Company who was doing contract work for Big River Shipbuilding for that project, said there was something about the bright green bottle that piqued his curiosity.

“I’m always looking for stuff like that,” Mitchell said. “I said, ‘This has a message or something inside it,’ so I reached and grabbed it. You could see the writing on the letter through the bottle. My buddy said, ‘Man, I almost kicked that back in the water.’ I’m sure glad he didn’t. I mean, who finds a message in a bottle?”

Mitchell carried the bottle aboard mv. Cecille Hintson, grabbed some kabob skewers and began carefully easing the letter, weathered and fragmented, out of the bottle.

“We stuck it in the microwave and dried it out just a little bit,” he said. “We could make out 1989 and saw it was a kid’s handwriting.”

Mitchell then contacted Brad Babb, safety and compliance manager for Big River Shipbuilders, who was eager for him to bring the letter up to the office. Together, Mitchell and Babb pieced more of the letter together, assembling part of an address and phone number, the date (August 30, 1989), two instances of the writer using the word “please,” a reference to calling collect, and the writer’s hometown, Oxford. What’s more, Mitchell and Babb found near the top of the letter what they thought was the writer’s last name, “Tahl.”

Mitchell and Babb knew exactly what they needed to do: see if they could reconnect the bottle with the person who wrote it.

“We asked ourselves, ‘How far do we take this?’” Babb recalled. “And we said, ‘Well, what would we want?’ This was just us doing what we’d want someone else to do.”

The pair reached out to people with the Oxford school district, but with so little information to begin with, that yielded no new details. Undaunted, Mitchell and Babb decided to cast a wider net.

“We took a picture of it and sent out a message on our Facebook page,” Babb said.

Babb posted the message at 4:41 p.m. on April 5. In no time, the post began garnering reactions, comments and more than a hundred shares.

About 48 hours later, while sitting in church waiting for his granddaughter’s choir to sing, Eric Dahl, a medical doctor in Oxford, got a phone call. He didn’t recognize the number, but he was on call that week, so he answered anyway. A local attorney was on the other end of the line.

“Attorneys calling doctors isn’t usually a good thing,” Dahl joked. “He said, ‘I think I found something online that involves your family.’”

Dahl’s wife, Melanie, quickly pulled up the post on Big River Shipbuilders’ Facebook page. They were floored by what they saw. Sitting there in church, they were staring at the middle school handwriting of one of their sons.

The next day, Eric Dahl called Babb to tell him the rest of the story.

The Dahls have two sons: Chris, who is still living, and Brian, their older son, who passed away in 2007 just shy of his 30th birthday. It was Brian who was in Burnett’s 1989 sixth grade class at Oxford University School when he was 11 years old.

“He was just an outstanding student,” Burnett said. “Very, very bright. Very interested in learning. He was a lovely little boy.”

One of the things about the letter that stood out to the Dahls and to Mitchell and Babb was how polite Brian was. Burnett said the students were required to identify themselves and give their phone number and address. Beyond that, they were free to be creative with the message.

“I wanted them to have a moment of being able to say what they wanted to say,” Burnett said. “It was typical of him—the “please” and “please” and “call collect.” He was very thoughtful, just a very well-brought-up and very intelligent boy.”

Brian matured into an insightful, compassionate and competitive young man, Dahl said. He got into road bike racing and was a champion in that sport. Then, in 2005, Brian was diagnosed with testicular cancer. Over the next two years, Brian fought through his cancer treatment and by 2007 had received a clean bill of health. Tragically, he died August 10, 2007, in an accident at his home.

Listening to Dahl speak over the phone, Babb couldn’t help but think of his two sons, who are roughly the same age Brian and Chris were in 1989.

“It just took it to a different place in my mind,” Babb said. “We cried, talked and cried again. Being a Christian and faith-driven in his life and the way I am in mine, we just took it as a message that ‘Dad, I’m still here, and I’m watching over you.’”

Babb and the Big River Shipbuilders team invited the Dahls to travel to Vicksburg to receive the message and bottle and meet the shipyard crew that found them. Eric, Melanie and Chris made their way to Vicksburg in July.

Dahl admitted he didn’t quite know what to expect from the shipyard crew. Up to that point, he had not had many interactions with mariners. The connection, though, was strong and instantaneous.

“Those guys are just family members to me now,” Dahl said. “They work hard on the river, and I was surprised they’d bother with a bottle, much less go to the impassioned ends they did to immediately begin to connect with whoever put that message in the bottle.”

The Dahls met the shipyard crew at the office, located just uphill from the Yazoo River Diversion Canal. Company President and CEO J.O. Smith treated the crowd, not only to a meal, but also to a boat tour of Vicksburg Harbor where the bottle was found and down to the Mississippi River. Dahl’s younger son, Chris, even got a lesson in piloting a towboat.

The timing could not have been more meaningful for the Dahls. The gathering in Vicksburg fell just weeks before the 15th anniversary of Brian’s death. NBC broadcast a story on August 13, the day before the 15th anniversary of Brian’s funeral. Though it’s been 15 years, the grief and loss is still there. Dahl said he and his family have received everything in the past weeks and months as a blessing from God.

“Like Billy told me when he pulled back from giving me that big bear hug, ‘It’s a message from God that your son is all right and he’s looking in on you,’” Dahl said. “It’s a God thing, and there’s a lot of mysteries about it, but it seems to be an evidence that there is a God who loves us and will use even the worst things in our lives to bless us.

“To have the greatest grief of your life comforted by such a thing is truly a blessing,” he added.

Finding the bottle has given the Dahls something of a gift from their son, penned by his own hand. It’s reconnected them with Brian’s teacher, who still speaks of that sweet student of hers. It’s even reconnected Dahl with a college friend who recently lost his own son.

And none of it would have been possible without what Dahl called a “chain of kindness.” The chain started with Burnett and her creativity in the classroom. It continued with her husband, Joe, who encouraged her to go below the dam at Sardis Lake to release the bottles. It carried on as the bottle was guided over the course of 33 years downstream until it took the unlikely turn into the Yazoo River Diversion Canal, rather than into the Mississippi River. And it culminated in the determined curiosity of a group of mariners who found it; in his son, Chris, who encouraged him to share the story; and in those who helped spread the word.

In a way, Dahl said, it’s fulfilled what Brian asked for in his letter.

“He was asking for a connection with a stranger,” Dahl said. “I just couldn’t help but think, when I got the bottle and saw that—and with the instant connection I had with Brad and Billy and the crew and Mr. Smith—the good Lord gave Brian what he wanted.”