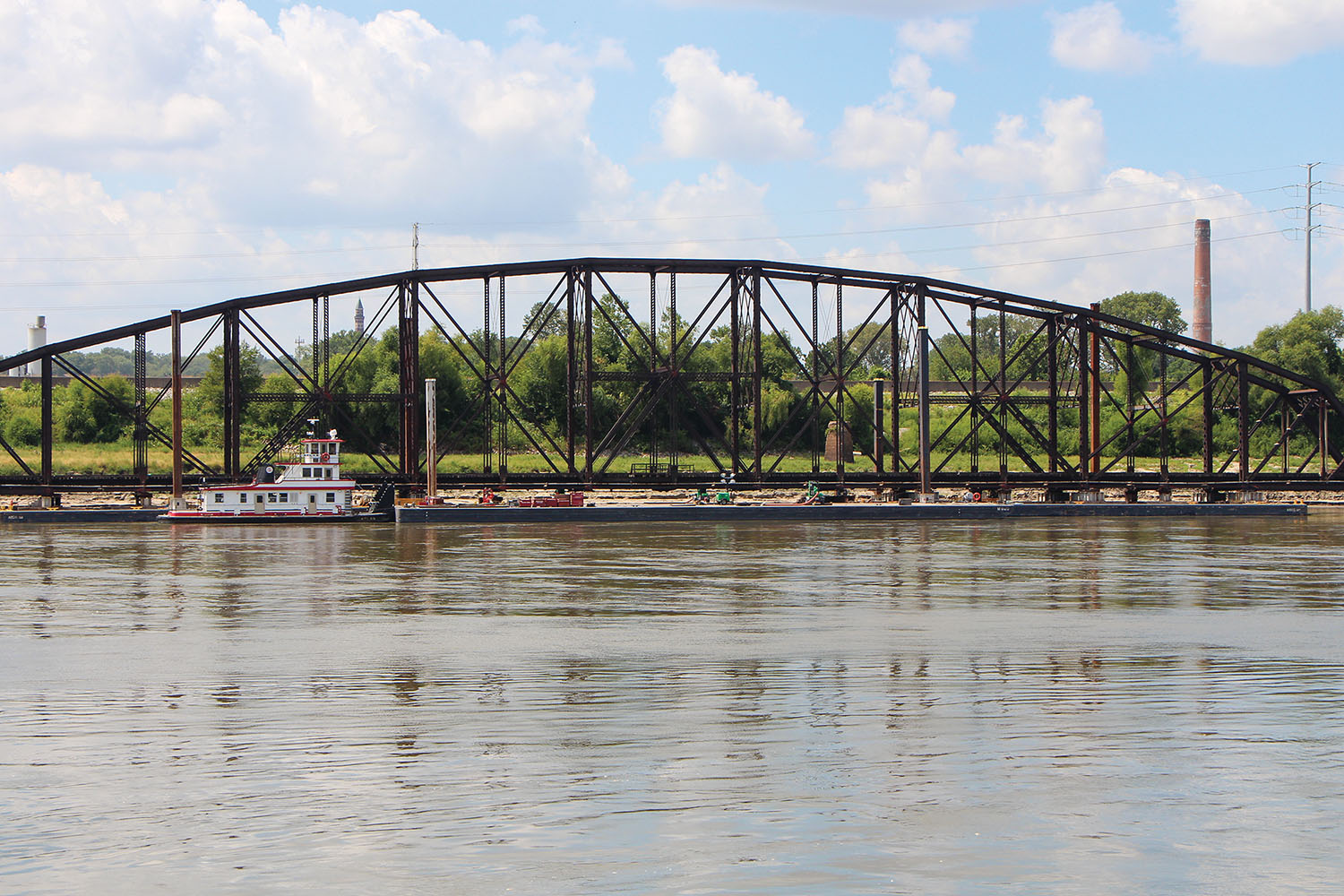 A group of 175 people took a ride on the riverboat Becky Thatcher from the St. Louis riverfront August 26 to see the third and final truss being floated into place before it was placed onto the Merchants Bridge, a railroad bridge that crosses the Mississippi River north of downtown St. Louis, Mo. The group consisted of invited guests of St. Louis Regional Freightway, a regional freight district and authority for freight operations within eight counties in southwestern Illinois and eastern Missouri, along with members of the public.

The $222 million project to replace the old Merchants Bridge has been the St. Louis Regional Freightway’s top priority since 2016. Dating back to the 1890s, the original Merchants Bridge was designed by George Morison, an important figure in the history of engineering who designed some of the first large-scale metal truss bridges in the country. Many 19th century railroad bridges over the Mississippi and Missouri rivers were designed by Morison. The Merchants Bridge’s original trusses were among the very few in America with spans of more than 500 feet.

The bridge now serves six Class I railroads and Amtrak. It is owned by the Terminal Railroad Association (TRRA) of St. Louis, which provided 90 percent of the construction costs. In 2020, the Federal Railroad Administration awarded TRRA a $21.45 million Consolidated Rail Infrastructure and Safety improvement grant toward the bridge replacement.

The project required the removal and replacement of three existing river-span trusses, seismically retrofitting the existing river piers and improving the eastern approach. Work began in 2018.

The third truss section weighed 9 million pounds and took five months to erect. The spans were constructed in Wisconsin and shipped to St. Louis for final assembly on the Missouri bank of the river. The steel was fabricated by Veritas Steel in Eau Claire, Wis. Removal and installation of the three new trusses required three separate 10-day outages, and three separate river channel outages. The first outage began September 13, 2021. The second truss was installed in early March of 2022. The old truss section was visible during the float-in, tied off to the eastern bank near the bridge’s eastern approach. Each of the previous two replacement spans took about 7.5 days to set in place. The actual lift was being handled by heavy-lift specialist Mammoet, with the help of a 4100 Manitowoc “ringer” crane.

“In TRRA’s 133-year-old history helping to ensure the smooth movement of rail freight, our company has never built a bridge, but today we’re marking a critical milestone in the final steps to deliver our first major bridge infrastructure project—a project that will dramatically improve the flow of both freight and passenger rail traffic through the bi-state St. Louis region,” said Asim Raza, chief legal officer and director of corporate affairs for the TRRA of St. Louis.

“The Merchants Bridge has been our highest priority because of its significance in the nation’s freight network,” said Mary Lamie, executive vice president of multi-modal enterprises at Bi-State Development, which launched St. Louis Freightway in 2014 with the goal of advancing infrastructure projects that support freight movement throughout the bi-state region.

Caption for photo: The final truss for the Merchants Bridge replacement project is floated into place. (Photo by David Murray)