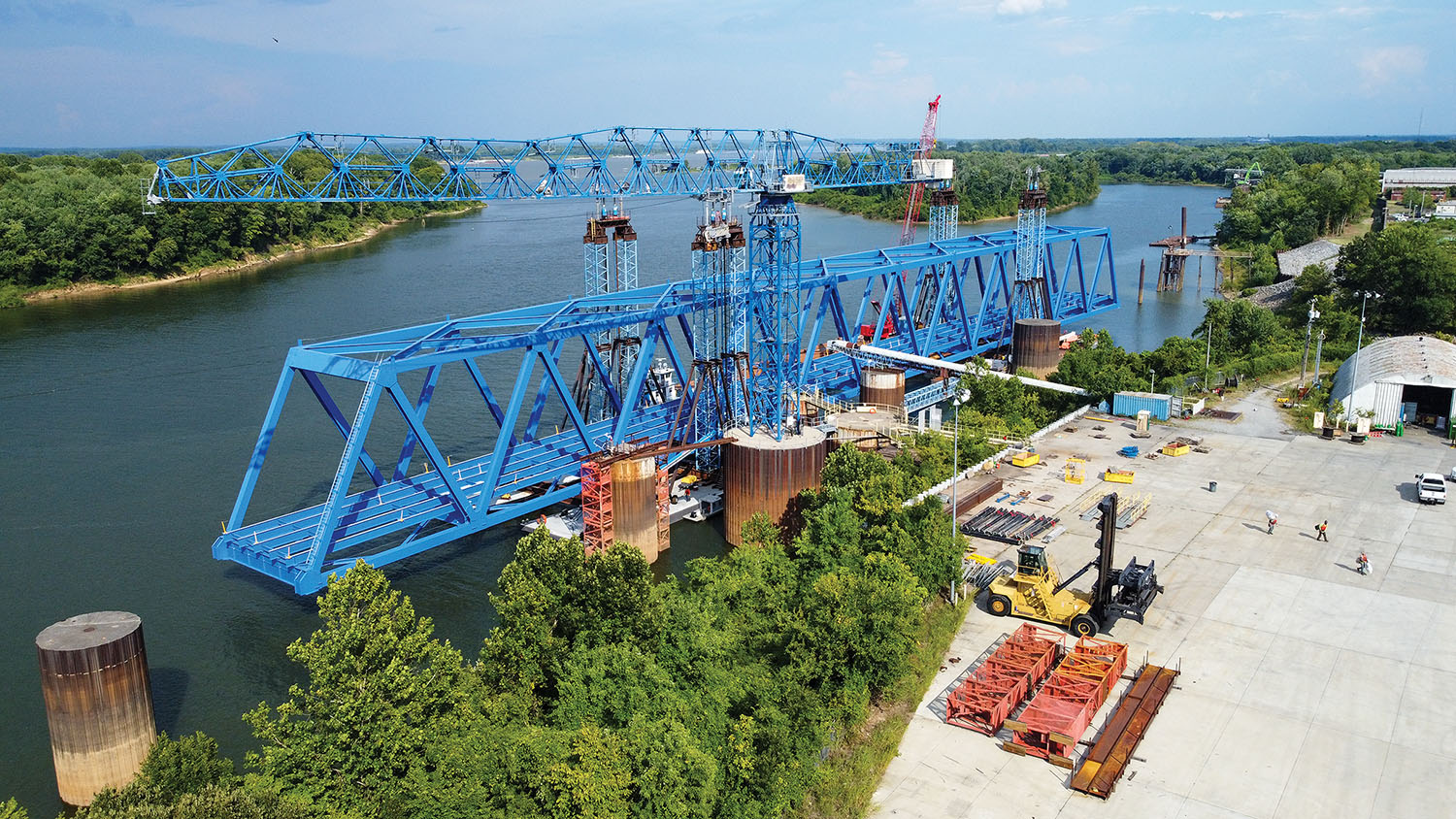 Portions of three rivers will close later in September as crews plan to float in and raise the 700-foot-long main span of a new bridge over the Cumberland River in Smithland.

The steel truss forming the bridge’s main span has been under construction at the Paducah-McCracken County Riverport Authority on the Tennessee River since last fall. It was built atop four jumbo barges and three 120-foot barges, provided by Paducah Barge and McDonough Marine Service. James Marine reinforced the jumbo barges to be able to handle the load.

The truss will be floated on the four jumbo barges, pushed by three Excell Marine towboats, to the Tennessee River’s junction with the Ohio River and then upriver on the Ohio to Smithland, where the Cumberland meets the Ohio. From there it will be pushed just upriver to the new bridge piers. It must travel about 14 miles in all.

The Coast Guard plans to close the stretches of the involved rivers as the truss moves by, with a longer closure at the work site on the Cumberland near Smithland.

If the weather cooperates and all goes as expected, the float will take place over the course of about four hours during the morning of September 12. The truss will then be lifted 87 feet and floated over the piers beginning September 13. Work to lower the span onto the bridge piers and to remove the lift towers could continue into September 14 to allow final adjustments, said Scott Swamback, project manager for American Bridge Company, which has been building the truss as Jim Smith Contracting has been erecting the piers. Jim Smith Contracting is the prime contractor on the $63.6 million project.

The closure is expected to begin at 5:30 a.m. September 12, according to the notice, and could remain closed until 10 p.m. September 14 as the contractor’s equipment will be moored on site within the navigation channel during this timeframe.

Marine radio channels will be monitored for vessel traffic communication.

The Kentucky Transportation Cabinet (KYTC) reported an operational window of September 9-20 for the move, with exact timing based on the weather and river conditions.

Barkley Lock and Dam, just upriver on the Cumberland, will remain open.

The U.S. Coast Guard will escort the truss, providing a safety zone around it during transit, Swamback said.

“The thing to consider that I guess a lot of people don’t recognize is it’s not that dissimilar from these big tows of barges that come down the river,” he said. “It’s the same concept except we’ll use three towboats instead of just one.”

Swamback said the river forecast calls for normal pool, which is necessary to move the truss. If it falls lower, there is a possibility of delay, he said.

Part of preparing for the float-in and lift was a test lift in the latter part of August, during which the truss was lifted a couple of inches to make sure the lift towers stay plumb and that the barges held the weight. No problems were indicated, he said.

“This is a significant step toward completion of the new bridge,” KYTC District 1 Chief Engineer Kyle Poat said. “Jim Smith Contracting, American Bridge and the numerous agencies that are involved in supporting the movement and placement of this truss will be putting in hundreds of hours in coming weeks to assure that everything goes as planned.”

Traffic on the existing U.S. 60 bridge over the Cumberland River at Smithland, known as the Lucy Jefferson Lewis Memorial Bridge or just as the Smithland Bridge, will be restricted to one lane with an automated traffic signal September 12–14.

Once the bridge is in place, Jim Smith Contracting expects it will take six to eight months to complete the deck on the main span to prepare it for traffic in the late spring of 2023. The new, 1,912-foot bridge is being built immediately downstream from the existing 1,817-foot bridge, which opened to traffic in 1931.

An updated construction schedule calls for connections to be made to U.S. 60 in April or May, allowing traffic to be moved to the new bridge and the old bridge to be demolished. Final roadway surfacing and finish work will then take place from June to August, with the target completion date scheduled for December 1, 2023.

Caption for photo: The 700-foot steel truss that comprises the main span of the new U.S. 60 bridge over the Cumberland River will be floated and lifted into place later in September. The work will cause brief closures of portions of the Tennessee and Ohio rivers and a closure of up to three days at the new bridge’s site. (Photo courtesy of American Bridge Company)