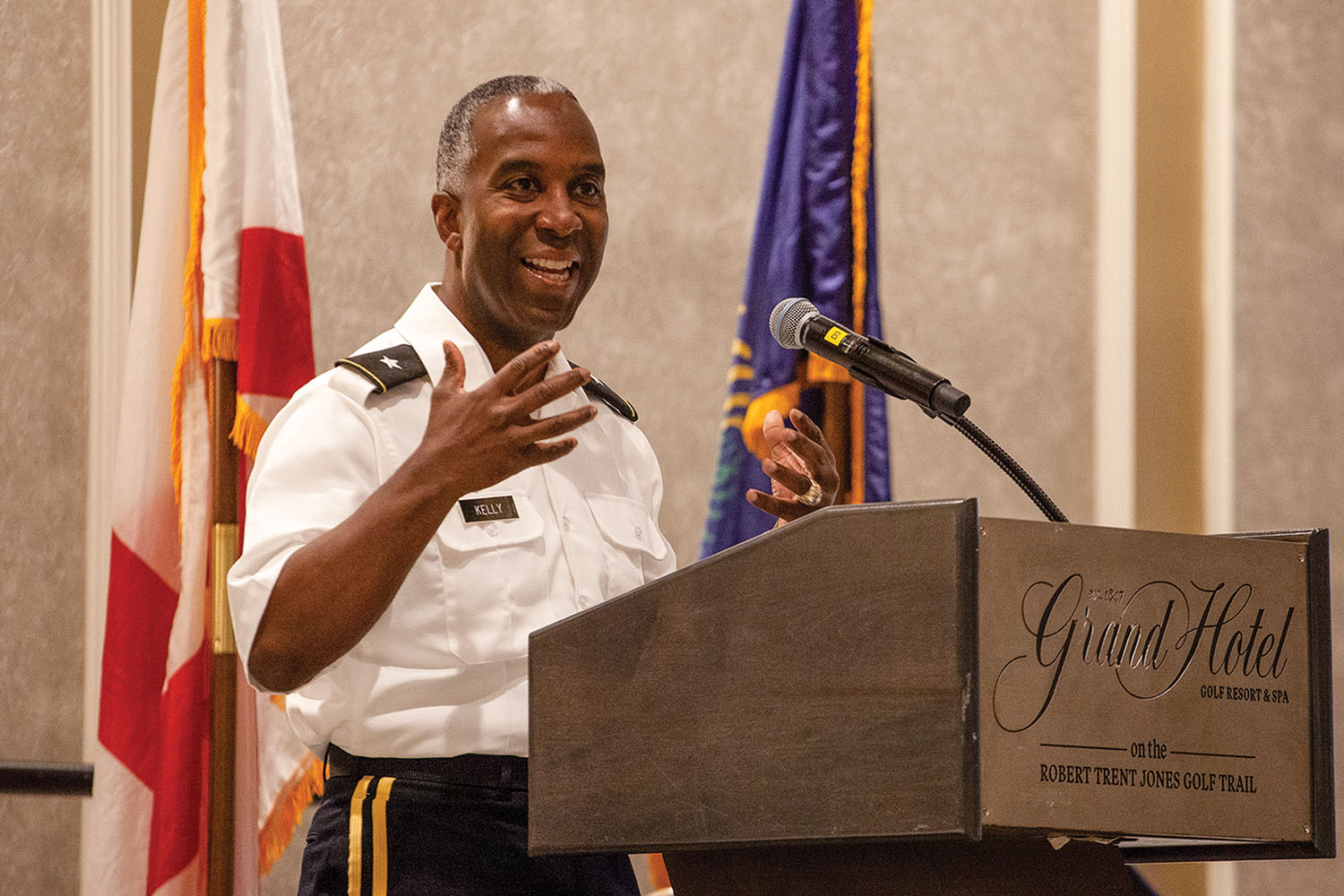 Stakeholders of the Tennessee-Tombigbee Waterway (Tenn-Tom) gathered in Point Clear, Ala., August 10–12 for the 40th annual Tenn-Tom conference to celebrate its rich history and look to the future of navigation and industry on the waterway.

Brig. Gen. Jason Kelly, commander of the South Atlantic Division of the U.S. Army Corps of Engineers, greeted the crowd by emphasizing the importance of ensuring the Tenn-Tom remains “viable and reliable.”

Kelly looked back at the construction of the Tenn-Tom Waterway, which began in 1972 and concluded in 1984 at a cost of $1.9 billion. At the time, the Tenn-Tom was the largest project in the Corps’ history.

“Few know that the excavation effort for the Tenn-Tom exceeded that of the Panama Canal,” Kelly said. “It was quite the undertaking.”

That investment continues to pay dividends in navigation, recreation and wildlife mitigation, Kelly said. The Tenn-Tom also represents an integral connection between the nation’s interior waterways and the Gulf of Mexico through the Port of Mobile. And work continues to ensure the waterway remains viable and reliable.

Both the Tenn-Tom and the Black Warrior-Tombigbee Waterway (BWT) to the east received $12 million and $17 million, respectively, for fiscal year 2022 from the Infrastructure Investment and Jobs Act. Fiscal years 2022 and 2023 will set aside $5 million for both waterways for critical spare parts, Kelly said, along with some lock repairs.

“More specifically, to repair the Whitten Lock chamber on the Tenn-Tom, the replace Holt Lock valves on the Black Warrior-Tombigbee, and to maintain Coffeeville Dam gates,” Kelly said. “Collectively, we did pretty good this term. I think we’re in a good spot, and I think it’s due to the tremendous outreach and advocacy by many in this room.”

Kelly mentioned the deepening study for both waterways authorized in the 2022 Water Resources Development Act, which will look at increasing the depth of the Tenn-Tom and BWT to 12 feet.

“It is my belief that this undertaking will make an already cost-affordable transportation system even more so,” Kelly said.

Leaders from the Mobile Engineer District later reported on operations from the past year, planned maintenance and for upcoming years and topics of concern. Construction continues on the new Tennessee-Tombigbee project management office in Columbus, Miss. The Corps has also recently deployed a new floating plant with crawler crane for the Tenn-Tom project.

Justin Murphree, operations project manager for the Tenn-Tom, reported on the June 2021 barge allision at Stennis Lock and Dam’s spillway, which saw a barge strike gate 2 and sink in front of gates 3 and 4 and part of 5.

“We came within about 10 feet of getting to the bottom of the dam,” Murphree said.

Temporary repairs have been made to gate 2 and solicitation will go out soon for the new gate.

For the Tenn-Tom, there are no planned lock closures for 2022. Murphree said the Corps plans closures at Wilkins and Cochran locks in 2023 and at Whitten Lock in 2024.

For the BWT, operations project manager Anthony Perkins told the crowd that valve replacements continue at Holt Lock with no needed closures. Fabrication is expected in fiscal years 2023 and 2024 for lower miter gates for Demopolis and Coffeeville locks, with closures for installation potentially occurring in fiscal years 2025 and 2026, respectively.

Attendees also heard reports from the Nashville District on construction at Kentucky and Chickamauga locks, along with a report on steps under consideration for preventing the spread of Asian carp within the Tenn-Tom.

The meeting also featured a report from John Driscoll, director and chief executive officer of the Alabama Port Authority, which overseas the Port of Mobile. The Mobile Harbor is in the midst of a deepening and widening project, and the Port of Mobile is continuing to expand its cargo and container handling capabilities to the tune of $650 million in investments that will be completed within two to four years.