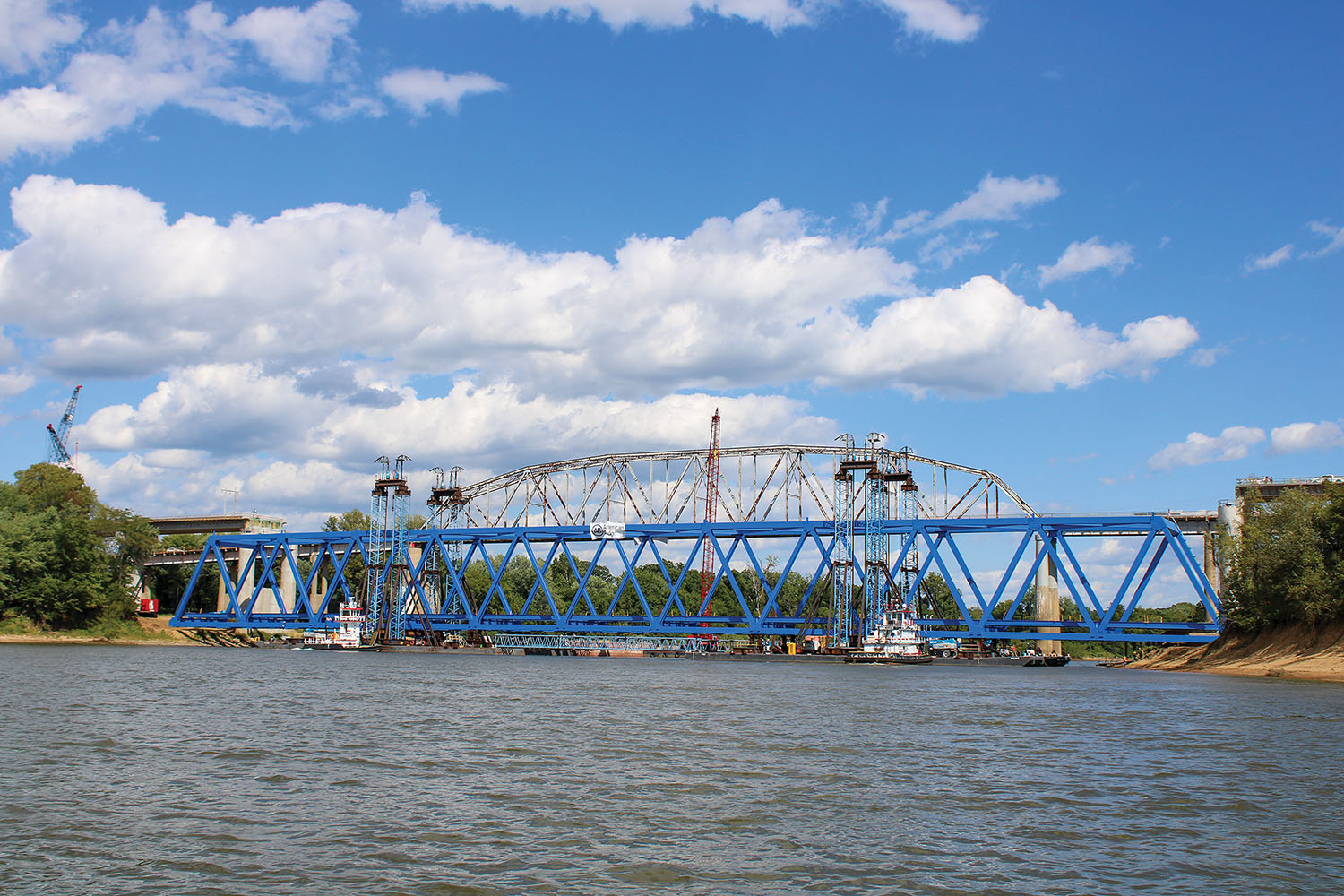 Dozens of people gathered September 12 at the riverfronts in Paducah and Smithland, Ky., watching as the 700-foot-long main span for a new bridge over the Cumberland River made a four-hour float to its final destination and was rotated into position.

Hydraulic lift towers then jacked it 90 feet into the air September 13–14 before lowering it about 15 feet onto the bearings atop the new concrete piers, with assistance from a crane as needed. The precision required was up to 1/16 of 1 inch in some locations.

“The relief only comes when we’re done setting it,” American Bridge Company project manager Scott Swamback said during a quick pre-float meeting with members of the media. He added that all the work completed up until then had made the float-in and lift possible.

There was an overnight delay midway through the lift of the new bridge following the failure of two different power units for the lifting towers. The bridge remained lifted high in the air the evening of September 13 while new units were overnighted to the site, Kentucky Transportation Cabinet District 1 spokesman Keith Todd said. Their arrival and installation allowed the bridge to be lifted the rest of the way and lowered safely into place the following day.

American Bridge Company, the subcontractor for the steel bridge superstructure, has been at work on the project since July 2021 at the Paducah-McCracken County Riverport Authority, although the first structural steel was put in place last September. The truss was built atop four jumbo barges and three 120-foot barges provided by Paducah Barge and McDonough Marine Service. James Marine reinforced the jumbo barges to handle the 6.7-million-pound load, which included both the truss and temporary supporting steel.

During construction, the truss, and therefore the barges it rested on, had to be rotated in the Tennessee River “about 10” separate times to allow access from the riverport’s crane and to keep the load balanced as more steel was added, Swamback said. Each carefully planned rotation required a temporary closure of the river at the jobsite.

One of the biggest challenges on the project was high water in February and March, which meant a limited distance between the top of the steel truss and the crane doing the work.

For its 14-mile trip down the Tennessee and then up the Ohio onto the Cumberland, which meets the Ohio at Smithland, three Excell Marine towboats pushed the truss atop the jumbo barges. Pilots had to steer with precision while traversing the rivers, especially at their confluences and along the winding and narrow Cumberland. While within the parameters for a safe operation, the river remained near a typical seasonal low point.

The Coast Guard provided a safety zone around the truss for the entirety of the float-in and lift. Boats from county disaster and emergency services organizations also patrolled nearby.

Among those settled in at the Paducah riverfront to watch the truss make the turn from the Tennessee to the Ohio River was William Harden, 82, of Wesminster, Md.

Harden was a passenger on American Cruise Lines’ American Heritage, which had stopped for the day in Paducah on its way to St. Louis.

Instead of a morning visit to a local museum, Harden decided to watch the bridge truss go by after hearing about it from local riverfront visitors. He did so with camera in hand.

Harden said he began his voyage down the Ohio River in Pittsburgh by having to ask others on the boat about what that “concrete structure” in the river—a lock—was, so it was only fitting to see more river infrastructure during his time on the riverbank.

“I’ve never seen anything like this, so I thought it would be fascinating,” he said.

In Smithland, the crowd gathered at a gazebo nicknamed the “Buzzard’s Roost” had mostly lived around the river their entire life, but they weren’t old enough to remember the construction of the existing Lucy Jefferson Lewis Memorial Bridge, which opened to traffic on U.S. 60 in 1931.

Marvin Buford, 69, of Smithland, a former Livingston County magistrate, pointed out Livingston County’s unique geography, in which the Cumberland River bisects the county into northern and southern sections.

“We really need this bridge,” he said. “We’ve been needing it for years.”

The old bridge has been a frequent target for barge and towboat allisions, built in a narrow curve. The new bridge, being constructed immediately downstream, will have pier placements that are out of the river at normal pool. The Kentucky Transportation Cabinet partnered with pilots to run simulations at the Seamen’s Church Institute to test both the pier placements and bridge alignment for easier navigation under the new bridge.

Tracy Cothran, 60, of Smithland is the former publisher of Between the Rivers magazine. She recalled an interview years ago with a 98-year-old lady who remembered when the existing bridge was built as a toll bridge, and schoolchildren crossing it to get to school had to pay a dime.

With a high school on one side of the bridge and middle school on the other, the old bridge was a frequent chokepoint for traffic, she said. It was also so narrow big trucks and even ambulances were known to occasionally lose side-view mirrors on the structural steel as they squeezed over to allow meeting certain head-on traffic.

Cothran’s father farmed and logged, so she has been across it on both a tractor and in a log truck.

“You had to literally be within an inch of the tractor tire touching the bridge,” she said.

Jim Smith Contracting is the prime contractor on the $63.6 million bridge project. The updated construction schedule calls for connections to be made to U.S. 60 in April or May, allowing traffic to be moved to the new bridge and the old bridge to be demolished. Final roadway surfacing and finish work will then take place. The target completion date is December 1, 2023.

Caption for top photo: Excell Marine towboats took the 700-foot steel truss that is the main span for the new Cumberland River bridge at Smithland down the Tennessee River from Paducah, then up the Ohio River to the Cumberland River at Smithland. It was floated on four jumbo barges. (Photo by Shelley Byrne)