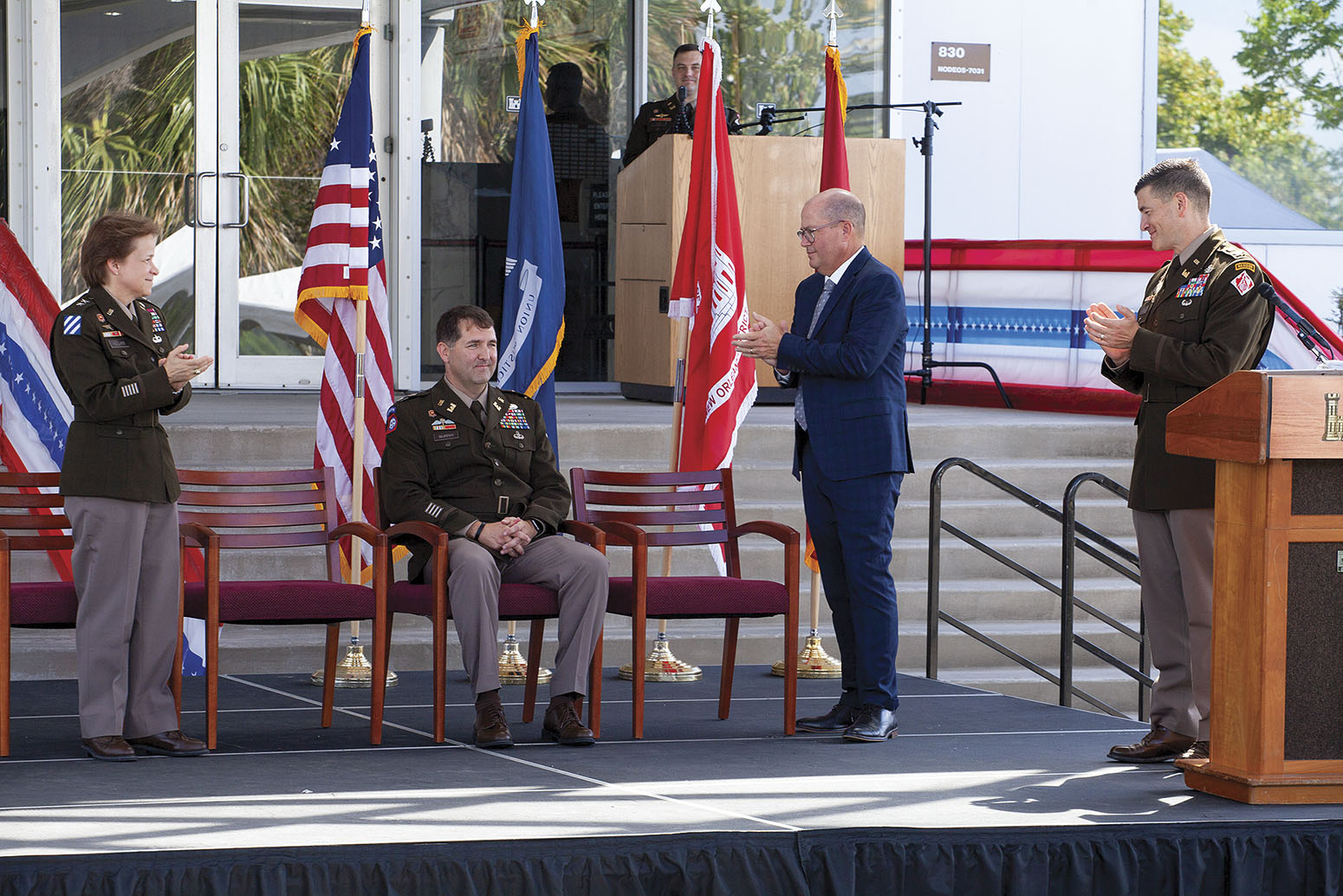 The New Orleans Engineer District celebrated its three years under the leadership of Col. Stephen Murphy and the transfer of command to Col. Cullen Jones in a September 16 ceremony held outside the district’s headquarters in uptown New Orleans.

The change of command brings an end to a busy three years for the district, which saw historic flooding, hurricanes and funding for construction and maintenance throughout its area of responsibility. Under Murphy’s leadership, the district has not only responded to emergencies and disasters, but the team has also tackled a huge project load.

“Over the last three years, the district has realized the largest rate of growth in its programs since that which was in direct response to Hurricane Katrina,” said Maj. Gen. Diana Holland, commander of the Mississippi Valley Division and president of the Mississippi River Commission.

“That program grew from $2.2 billion to $5.2 billion following the passage of the Bipartisan Infrastructure Law and the Hurricane Ida Disaster Recovery and Assistance Act.”

Looking back over his time in command of the district, Murphy said he was reminded of his reaction to the news that he’d been selected to lead the New Orleans District.

“I think God has a sense of humor, because when I found out I got the New Orleans District, not only was it a great honor, but it was, ‘Oh, wow, I got the New Orleans District,’” he recalled, invoking a grave tone. “People asked me, ‘How can I pray for you?’ Because I believe in prayer, I said, ‘Please pray for three years of no Gulf hurricanes or no Mississippi River flooding.’”

With laughter building in the crowd, Murphy added, “We have had historic, unprecedented, record-breaking incidences of both. And as an icing on the cake, God gave me both in my first week. We had Hurricane Barry while the Mississippi River behind you was at a very high flood stage.”

Besides the high water on the Mississippi River, the district has dealt with hurricanes Laura, Delta, Zeta and Ida, among others, over these three years; restrictions due to COVID-19; the effort to deepen the Mississippi River Ship Channel to 50 feet; and unprecedented funding through both the Infrastructure Investment and Jobs Act and disaster recovery funding.

Murphy said the experience reminds him of the Douglas Malloch poem “Good Timber,” which reads, in part, “Good timber does not grow with ease, the stronger wind, the stronger trees.”

“We’ve watched and seen a lot of strong winds here, literally and figuratively, and so I am thankful to God, for starters, for giving me the incredible opportunity to command such an incredible organization,” Murphy said.

Murphy thanked a whole host of friends and partners who helped make the district’s past three years a success. He thanked Holland for her leadership of the Mississippi Valley Division. He also thanked Louisiana Gov. John Bel Edward, with whom Murphy has had a close working relationship for his entire tenure with the district.

“He made a conscious decision to change the narrative post-Katrina with the Corps here in south Louisiana, and we worked side-by-side, communicating regularly, positively, often via text or phone call,” Murphy said. “As a result, that $5.4 billion increase in our program, really to the benefit of south Louisiana and the nation, is what resulted. We haven’t seen that level of investment in the district since Hurricane Katrina.”

Murphy also thanked Chip Kline with Louisiana’s Coastal Protection and Restoration Authority; Shawn Wilson with Louisiana’s Department of Transportation and Development, the cost-share partner on the river deepening project; representatives from the Governor’s Office of Homeland Security and Emergency Preparedness; the U.S. Coast Guard; the state’s congressional delegation; industry partners; Corps employees and many others.

From his district team, Murphy especially thanked Mark Wingate, deputy district engineer for programs & project management for the district, calling him his “closest battle buddy and my personal friend.” Murphy said his wife, Nicole, jokingly calls him his “work wife.”

Flood protection, recovery work, dredging and channel deepening were made possible by the teamwork at every level that Murphy experienced during his three years at the helm of the district.

“The Mississippi River is deeper, allowing for increased agricultural exports and trade imports at a time when the breadbasket of Europe is empty because Russia invaded Ukraine,” Murphy said. “What we do locally matters internationally.”

Murphy recognized the New Orleans District team, which has overseen the deepening of much of the Mississippi River Ship Channel to 50 feet, the completions of the Greater New Orleans Hurricane and Storm Damage Risk Reduction System, advanced six studies and five construction projects, and overseen the start of federal investment and construction on the 98-mile Morganza to the Gulf Flood Risk Management Project.

“Contracting division of the year is just one of many awards from these talented individuals,” Murphy said. “This truly is a battle-hardened district.”

Murphy will now join Nicole, his son, Will, and his daughter, Claire, in Tampa, where he will serve as command engineer for the U.S. Special Operations Command at MacDill Airfare Base.

Now in command of the district is Col. Cullen Jones, who, like Murphy, previously served as commander of the Nashville Engineer District. Most recently, Jones served as the chief of staff for the Office of Security Cooperation-Iraq at the U.S. Embassy in Baghdad. Alongside Jones in New Orleans is his wife, Sharon, his son, Jameson, and his daughter, Arden.