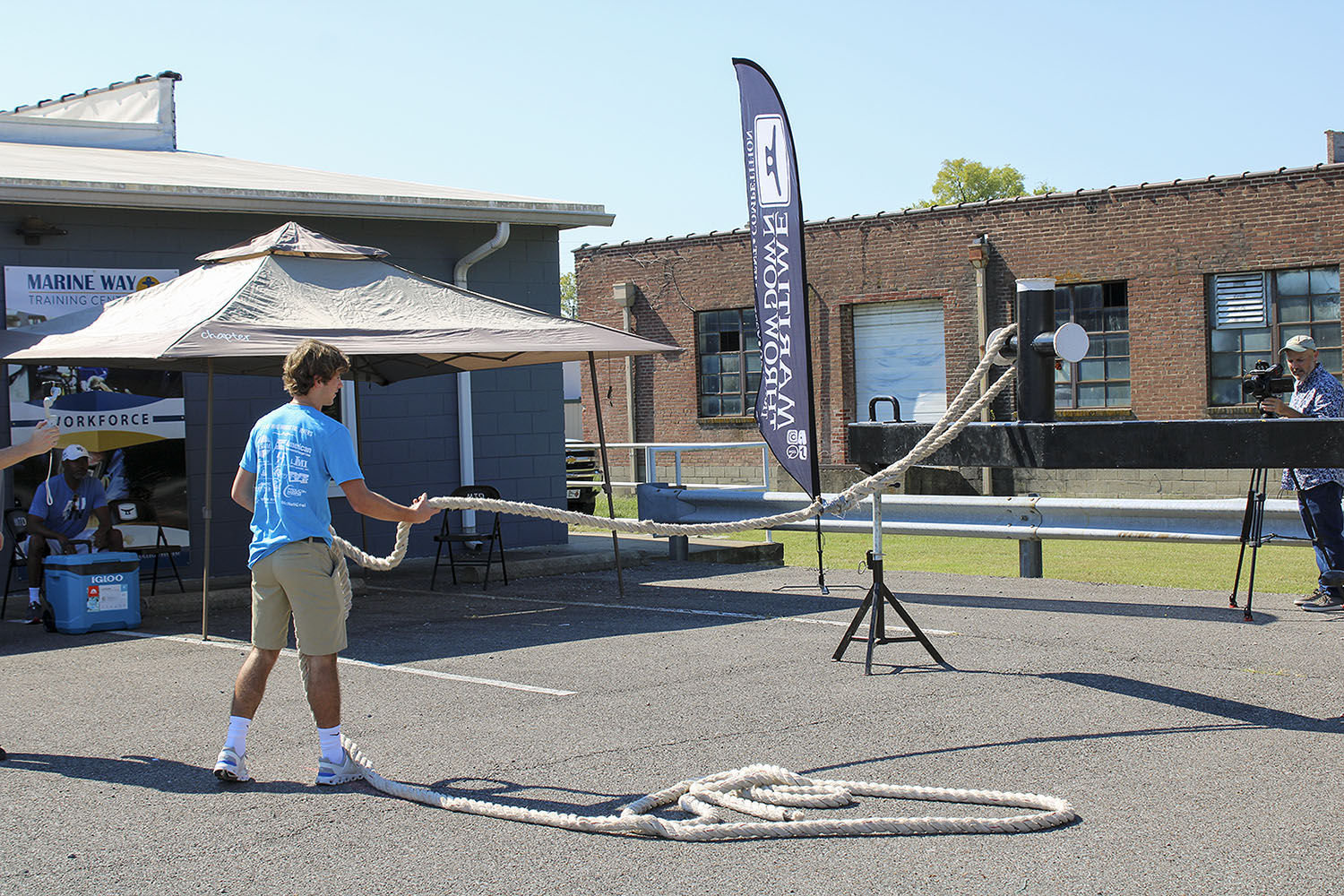 Who Works The Rivers Visits Paducah

More than 150 juniors and seniors from five western Kentucky high schools had their chance to learn about the river industry at RiverWorks Discovery’s Who Works The Rivers event September 21.

While the educational event has toured river towns across the nation since 2011, this was only its second visit to Paducah. The first was roughly a decade ago when an older version of the program served as a career fair for various companies. Since then the program has been redesigned into a collaborative and interactive event designed to promote the industry as a whole.

The idea for Who Works The Rivers is to give high school students exposure to the river industry as a possible career.

“The public can’t be supportive or come into careers in this industry if they don’t know about it,” program director Errin Howard said.

Sponsors of the program worked together to host stations for the students, who visited in small groups to learn about commodities, welding, diving, personal protective equipment, knot-tying, making bumpers, line-throwing, culinary arts and radar operations, among other activities. Many of the stations included hands-on activities or demonstrations.

Krystal Watson, education coordinator for Paducah’s River Discovery Center, was among the speakers who reviewed facts and figures concerning the river industry with the students, whose attention and participation was ensured through correct answers being rewarded with KitKats tossed to them.

“Guess what, guys?” she said at one point. “Paducah is at the hub of the inland waterways system.”

Several students reacted with surprise, saying they see towboats and barges going down the river but didn’t understand that nearly every major river company has an office in Paducah.

Justin Yott, a senior human resources representative with American Commercial Barge Line (ACBL), was among those who told his story of working on the river. Yott said he learned about careers on the river from a friend. He grew up an hour’s drive away from Paducah in Martin, Tenn., but had no concept of river careers when he was in high school.

After starting his career as a deckhand, he worked up to mate before switching to a shoreside job as a crew dispatcher and then working his way into human resources.

“There are always so many doors open here,” he said of different directions river careers can take those who are interested in them.

Howard stressed that the industry is unique in that most CEOs began in entry-level positions within it.

“In this industry, in order to run it from the top, you’ve got to work up from the bottom,” she said.

Among the questions students asked were the starting salary for a deckhand ($44,000 to $55,000), what a normal daily schedule looks like (6 hours on duty and 6 hours off, twice a day), what training is provided (varies by company) and what requirements are to get hired (at least 18, drug-free and have a driver’s license).

Videos the students watched gave other important information, such as how to apply for a job, interviewing techniques for both in-person and online interviews and how to keep a job once landing it.

Job-seeking tips included always fully completing an application, using an email that includes their name or initials, listing job experience even if that is volunteer work or club membership in high school, asking permission to list references before doing so, using their name on a voicemail, answering the phone appropriately and being aware of what they have posted on social media, along with making sure they can successfully complete a drug test.

Job-keeping techniques included being on time, wearing personal protective equipment, communicating well, being neat and tidy and treating people as you would want them to treat you.

Stanley Colson, 17, a Ballard County High School senior, said he is taking part in a high school program to be certified as a welder but didn’t previously know about available jobs in the river industry.

“I thought it might open up some new pathways for a job opportunity,” he said in his choice to attend the event.

Jackson Willett, 17, a junior at St. Mary High School in Paducah, said he spends a lot of time boating on nearby lakes and sees towboats and barges all the time.

“I thought it might be interesting to see what the barge industry is all about,” he said.

After taking part in a Maritime Throwdown-sponsored line-throwing event, he said he had a new appreciation of some of the work.

“I got it after like five times,” he said, chuckling lightly. “It definitely took a little practice.”

Makiah Royce, 17, a senior at McCracken County High School, said she enjoyed the event in part because it helped her learn more about what her uncle, who works on a towboat, does. She said she was interested to learn that one barge can move as much cargo as 16 rail cars or 70 tractor-trailer rigs.

New to the national curriculum this year, students were given T-shirts with sponsoring companies’ names to wear on their trip, which meant they will have the names of area river-related companies with them to take home, something that could be helpful in later job-seeking.