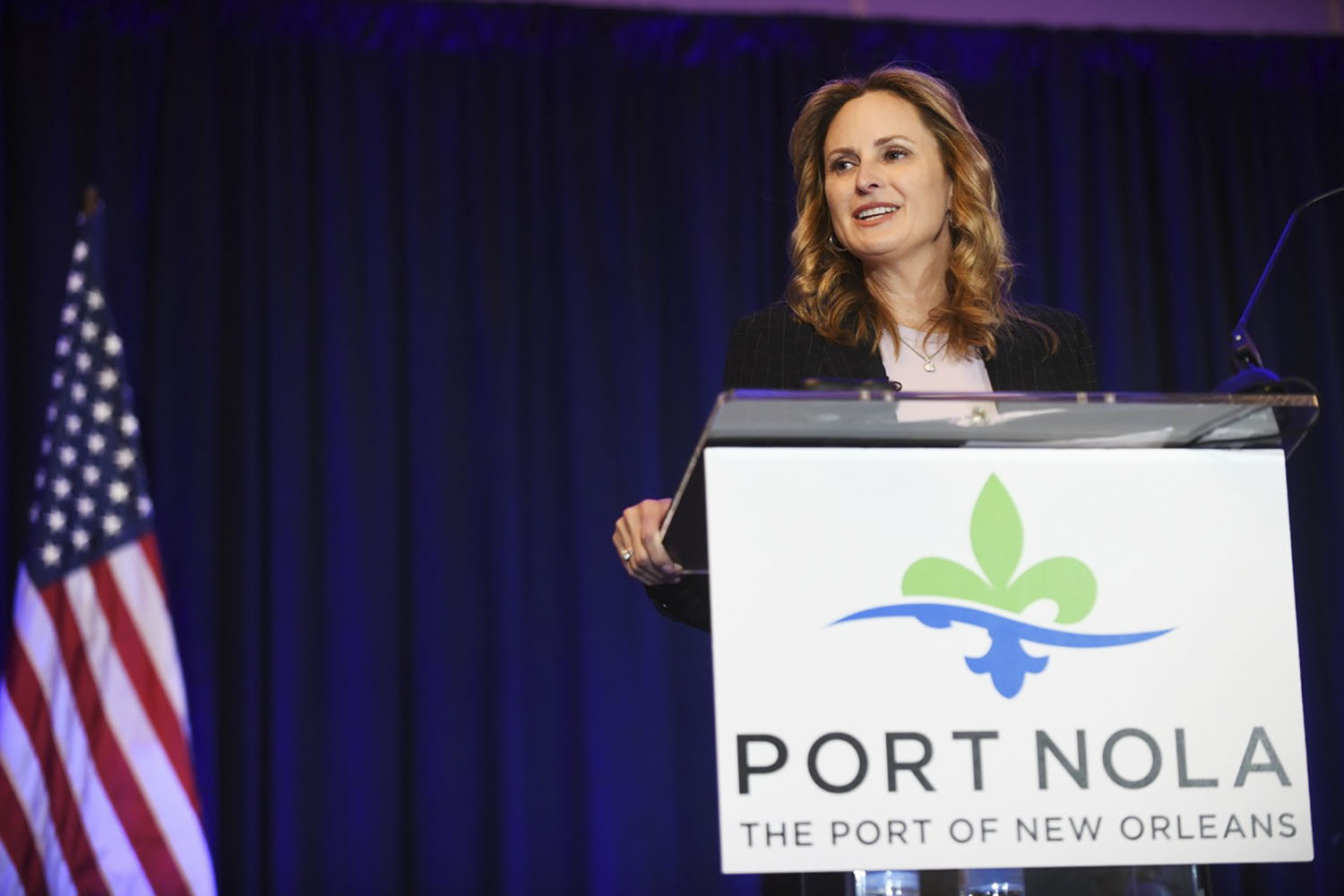 Port NOLA Hosts First ‘State Of The Port’ Gathering Since 2019

When Port of New Orleans President and CEO Brandy Christian approached the podium to deliver her annual “State of the Port” address September 29, she did so accompanied by the Journey power ballad from 1981, “Don’t Stop Believin.’”

That theme of resilience and resolve proved integral to Christian’s report, titled “Delivering Louisiana’s Future,” which both looked back at port operations since the onset of the COVID-19 pandemic and looked forward to what may be in store for the Port of New Orleans and the region.

Christian opened her speech by offering words of thanks to a wide range of people who have supported and continue to support the port, from elected officials to cargo owners, operators and the railroads. In particular, she recognized the laborers, truckers and organizations like the International Longshoremen’s Association, who have kept cargoes moving through the port, regardless of the weather conditions or the state of the pandemic.

“You kept cargo moving safely and efficiently during hurricanes and during the pandemic,” Christian said. “Without you, it wouldn’t have been possible.”

Christian admitted that a lot has happened since the last time the port hosted a State of the Port event in 2019. Since then, the port has been impacted by the shutdown of the cruise industry from the spring of 2020 until the summer of 2021 and the worldwide disruption of supply chains.

“And yet the challenges of the last three years are not so different than what we have faced here in the New Orleans region in the last 300 years through floods, pandemics, wars, hurricanes and recessions,” Christian said. “There has always been one constant—our river.”

The Mississippi River, with its 50-foot channel, federal levee system and the rich communities that hug its banks, has always made Port NOLA a competitive gateway. It’s also made it possible for the port to innovate during the pandemic to attract business, like offering the ability to switch some cargoes from containers to breakbulk.

“The future is bright at Port NOLA as we continue to shine a light on our gateway’s diversity that has allowed us to pivot, providing supply chain solutions to customers old and new,” Christian said. “We have the opportunity to be the next generation leader in global trade, so let’s seize this moment of clarity brought by global events, and let’s deliver Louisiana’s future together.”

Those recent investments, along with global logistics dynamics, have led to a rebound at the port in 2022. The port’s breakbulk volume doubled in fiscal year 2022, with steel imports growing by 123 percent and natural rubber by 50 percent. With some traditionally containerized cargoes switching to breakbulk, the port saw a huge increase in breakbulk plywood in 2022 and welcomed breakbulk coffee vessels for the first time in 30 years. The cruise industry has also roared back in New Orleans, with Carnival cruises averaging 110 percent occupancy from New Orleans; Norwegian, Disney and Royal Caribbean back at the port; and with Viking departing for the first time from the port in October.

Still, Christian said the port and, to an extent, the entire state, is at a crossroads.

“These last few years on the global stage have revealed the fundamental importance of the supply chain in getting food to the grocery store shelves, packages delivered to our doorsteps, and manufactured products to markets,” she said. “As a state, we have a real opportunity here—not just to retain our access to goods and materials, but to re-establish Louisiana as an integral nexus within the global market.”

The 50-foot channel through New Orleans enhanced the region’s competitive standing, and the federal levee system that protects port infrastructure in the parishes of Jefferson, Orleans and St. Bernard adds to the port’s resiliency.

“It is up to us to seize the opportunity these massive investments bring. We must deliver maritime facilities to match,” Christian said. “And that’s exactly what we’re doing.”

Christian said the port’s planned container terminal in Violet, La., which will be free of air draft restrictions, remains on schedule. The project is in the early stages of the permitting process, and the port itself is contributing $500 million for the terminal. The estimated cost to build the Louisiana International Terminal is $1.5 billion. The port expects to begin construction in 2025, with the first wharf to come online in 2028.

The port is finalizing negotiations with private partners for the project and continuing to engage the community surrounding the property.

“We’re actively working with our neighbors to design a project that provides opportunity and protects quality of life,” Christian said. “The Louisiana International Terminal will serve as the needed catalyst to align resources and partners to deliver long needed projects such as a longimagined public roadway in lower St. Bernard Parish.”

• Port NOLA is continuing its Clean TRIP program, which incentivizes the repowering or replacement of trucks. More than 90 old engines have been replaced since 2016.