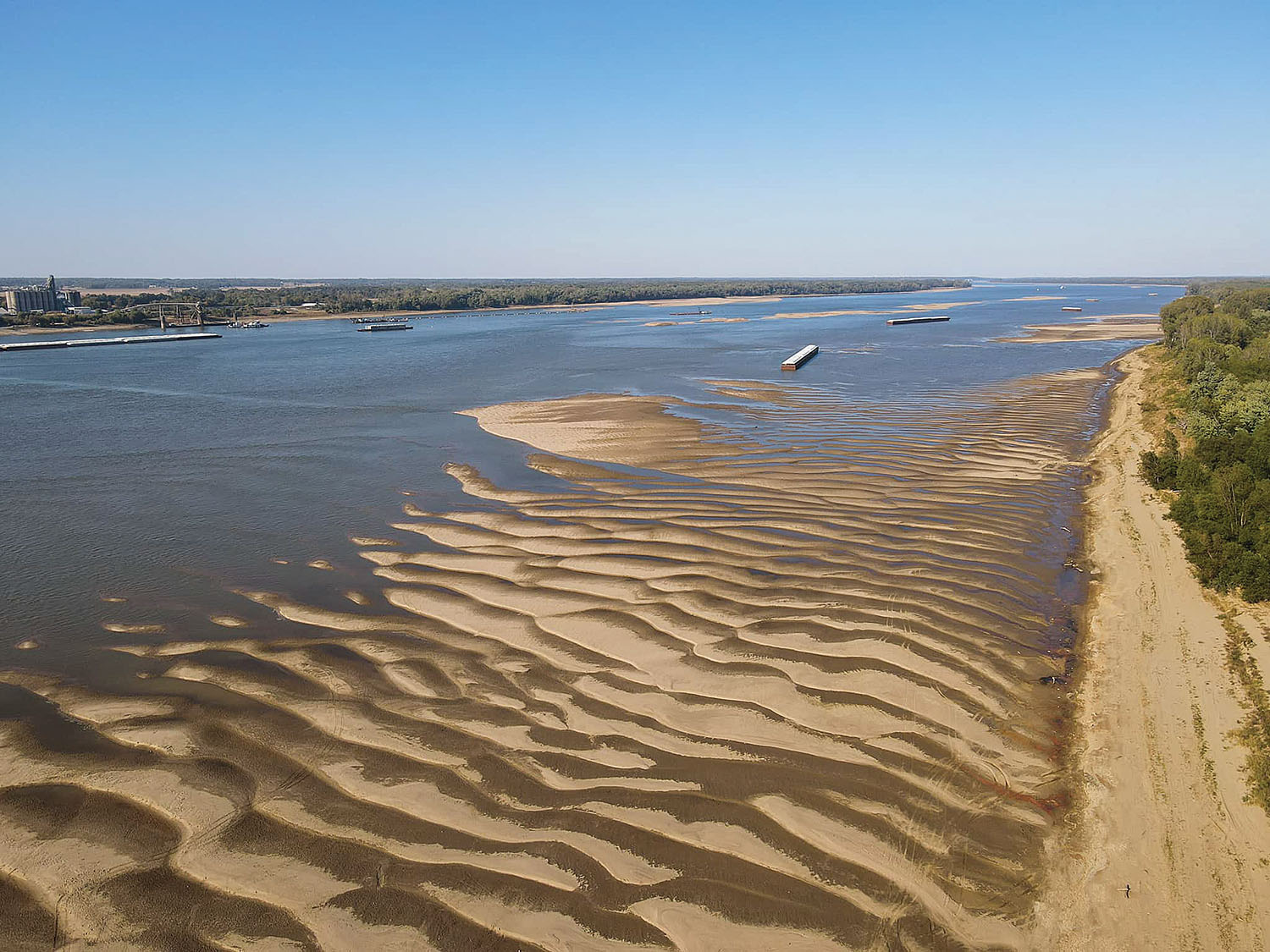 With no rain relief in sight, historic low water on the inland river system continues to block channels, restrict tow sizes, cause light-loading and slow or halt traffic, affecting millions of tons of agricultural cargoes at the height of harvest time. The low water has crept upriver into the Ohio River, which briefly closed at Mile 974 due to groundings just below Olmsted Locks and associated dredging.

Several barge companies have declared “force majeure,” meaning they cannot fulfill delivery dates in contracts due to events beyond their control.

The Corps of Engineers dredge Hurley, homeported in Memphis, arrived at Mile 681 on the Mississippi River October 10 to clear a queue of tows after dredging further south at Stack Island, where the Hurley dredged the channel to clear a backlog of almost 3,000 barges.

The channel at Mile 681 was closed from October 11 through October 12 while dredging commenced. The Hurley then moved out of the way of barge traffic. Virtual buoys were used to mark the channel until dredging operations were completed. The Coast Guard buoy tender Kankakee stood by to mark the channel with physical buoys. The Coast Guard is moving another buoy tender from the Ohio River to set buoys in the Lower Mississippi, and three states have sent dustpan dredges to help clear low spots.

Three vessels with 22 barges in tow grounded at Mile 974 on the Ohio River, near Mound City, Ill., and the river was closed in that area from midnight to 6 a.m. October 10, said Petty Officer Jose Hernandez, a Coast Guard spokesman.

Two of the vessels were upbound, and one was downbound. Barges in their tows carried powdered concrete, iron ore, potash, ammonia and fracking sand. No injuries or damage had been reported, Hernandez said. While some of the vessels and barges were quickly cleared, one barge containing powdered concrete remained aground longer, with the barge company working with the salvage company to refloat it.

Hernandez did not name the individual companies or vessels involved.

The Coast Guard issued a safety broadcast to mariners advising them of channel maintenance dredging between Miles 969 and 975 on the Ohio.

“Work will be conducted 24 hours a day and is expected to last until October 19,” the Coast Guard said. “Due to low water conditions, all mariners shall make passing arrangements via VHF-FM Channel 13 with the dredge Bill Holman when departing Olmsted Lock and Dam heading southbound or at Cairo point when heading northbound.”

No groundings were reported at Upper Mississippi Mile 44, near Cape Girardeau, Mo., but the area did close between 1 p.m. October 10 and 9:30 a.m. October 11 for dredging and had the potential for additional closures, Hernandez said.

During the closure, six upbound tows and three downbound tows were reported in the queue, Hernandez said.

The Coast Guard continued to address needs as they arose.

“The Coast Guard is working with the Army Corps of Engineers, industry working groups and National Weather Service to determine how best to address the needs of the general public and the maritime industry,” Hernandez said. “USCG western rivers cutters are being deployed to move up and down the rivers readjusting aids to navigation.”

“This safety advisory is needed to protect vessels and mariners from hazards associated with low water, including possible shoaling and decreased channel widths,” said the advisory, which was signed by U.S. Coast Guard Lt. Commander R.G. Cherkauer, chief of the Waterways Management Division.

During periods of low water as listed in the low water watch phase of the WAP (0 feet to -2 feet) it is advised to take the following precautions:

• Advise deep draft vessels to depart any areas of low water with a reminder to transit at a slow speed near fleeting areas to minimize impact.

• Place heavy barges in the middle of a tow and be aware of shifting channels.

During periods of low water as listed in the low water action phase of the WAP (-2 feet to -3.25 feet) it is advised to take the following precautions:

• Be aware of shifting channels; emergency dredging may be required at some locations.

• Recommend all vessels reduce draft to 9 feet or less.

During periods of extreme low water as listed in the WAP (-3.25 feet and below) it is advised to take the following precautions:

• Be prepared for severe restriction of navigation if conditions warrant.

• Fleeting may continue if conditions warrant.

“Proactive risk mitigation strategies should be utilized to safely navigate in low water conditions,” the advisory said. “Operators should closely monitor river gauge readings while transiting pools and river systems. Owners, operators and port captains preparing barges must be mindful of the drafts, particularly anticipated under keel clearance, to ensure a safe transit.”

The American Waterways Operators addressed the low-water conditions in a statement included in the organization’s e-newsletter on October 12.

“Over the last two weeks, industry groups including AWO have been working hard to address challenges caused by the near-historic low water in the Mississippi and Missouri River Basins,” the statement read. “The Lower Mississippi Operations Committee (LOMRC), co-chaired by Jay McDaniel with Kirby Corporation and Randy Chamness with American Commercial Barge Line, along with the River Industry Action Committee, co-chaired by Bernie Herloff with ARTCO, have laid the groundwork to enable the movement of commerce in the area. River Industry Executive Task Force (RIETF) Chairman Rich Kreider with Campbell Transportation Company and AWO staff have been in regular contact with U.S. Coast Guard Eighth District and Mississippi River Division leaders to ensure appropriate steps are taken to facilitate the safe continuation of navigation while low water conditions persist. RIETF is an AWO standing task force created during the last historic low water event in 1988.”

For farmers, especially west of the Mississippi River, the low water is just the latest act of a drought covering most of the western U.S. that has reduced crop yields and quality. In some parts of the country, the drought began last summer.

“The limits on channel depth and channel width restrict the economics of barge transportation at a very inopportune time for U.S. farmers,” Steenhoek said. “Harvest is ‘game time’ for farmers, and the supply chain is responsible for transporting soybeans and grain to domestic and international customers. Barge transportation is an essential component of this. For soybeans it is of particular concern, given how 80 percent of exports occur between the months of September and February.”

The barge and towing industry is maintaining a 25-barge maximum tow size south of St. Louis.  Under normal conditions, a single tow in this region of the river would include up to 40 barges.  “We continue to see reduced water depth limit the volume of soybeans and grain that can be loaded in each barge,” Steenhoek said.

According to the U.S. Department of Agriculture, 54 percent of soybean exports are transported via barge. “The strength of U.S. soybean exports and the condition of the inland waterway system are closely interconnected,” Steenhoek said. “Because barge capacity—due to channel depth and width limitations—has significantly decreased, there is an increased demand for barges, barge crews, towboats, etc., to transport the 2022 harvest. This continues to exert upward pressure on freight rates.”

According to the U.S. Department of Agriculture, transporting a ton of soybeans loaded in St. Louis cost $90.45 per ton during the week ending October 4.  For the week ending October 5, 2021 (one year earlier), the same shipment cost $28.45.  “We therefore have experienced a 218 percent increase in barge freight rates originating in St. Louis over the past year,” Steenhoek said.

When barge traffic slows or is halted downriver, according to Steenhoek, “The barge loading facility will often respond to such a scenario by decreasing the price offered to farmers (i.e. ‘having a more negative basis’) to mitigate deliveries to their location. We are seeing this phenomenon on vivid display due to the current conditions along the inland waterway system.” The “basis price” offered to farmers for their crops can “go negative,” i.e., fall below the futures price established by the Chicago Board of Trade. The more negative the basis, the less farmers receive for their soybeans and corn. Some Ohio River grain terminals have reportedly stopped receiving grain while they wait for obstructions to be cleared downriver.

Steenhoek offered snapshots of some decreased corn and soybean prices at various river terminal locations, detailing the pain for farmers.

At the barge hub of St. Louis, the basis price for both corn and soybeans this time of year ranges from negative 10 cents to even; now it is negative 95 cents for beans and negative 50 cents for corn.

“Fortunately, the U.S. agriculture supply chain includes the Pacific Northwest, the Atlantic Coast and other port regions,” Steenhoek said. “But the inland waterway system that connects much of the Midwest with our number one export region near the Gulf of Mexico is clearly under stress and a continued reason for concern.”

Caption for top photo: A drone photo shows low-water conditions at Ohio River Mile 974 near Mound City, Ill., including some of the barges that had grounded in the area recently. (Photo by Zoe Dillworth)