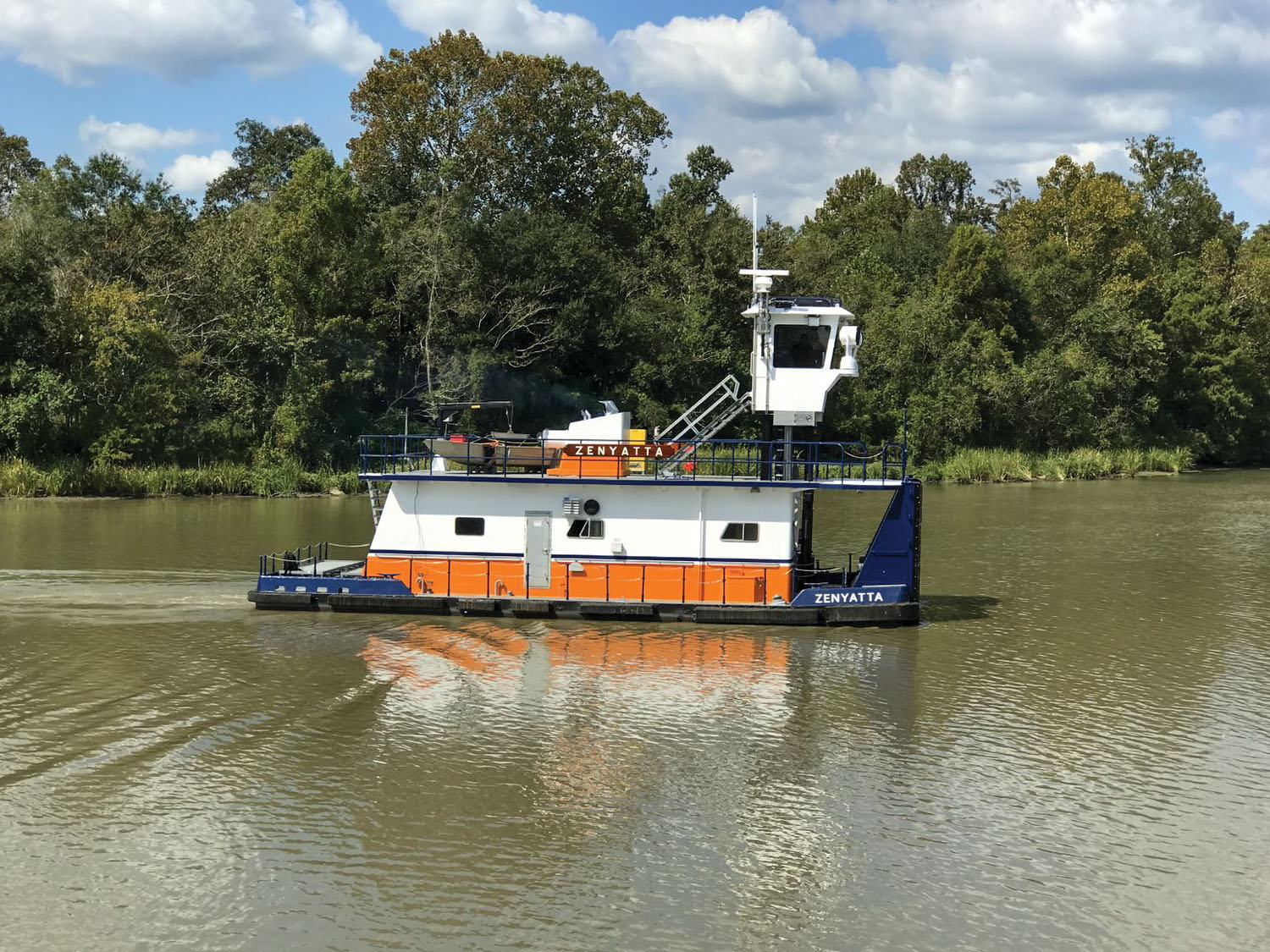 Back in 2009, Verret Shipyard built a 55- by 20-foot, 1,000 hp. towboat with a spider deck called the mv. Donnie, named after Verret Shipyard President Ted Verret’s late brother. Verret never intended on the Donnie leaving the vicinity of Plaquemine, La. He built the boat for T&B Towing, the small towing company that he and Boyd Verret own together.

“At the time it was being built, I said, ‘This will be my retirement,’” Verret recalled.

But the mv. Donnie was destined for other harbors.

Blessey Marine bought the vessel in the summer of 2011, renamed it the mv. Rick Pumphrey and eventually sent it to work in the Houston harbor.

Fast forward to the summer of 2021, when New Orleans-based Turn Services acquired a fleeting location and 25 acres of land in La Porte, Texas, just west of the Houston Ship Channel. In short order, Turn Services bought some deck barges in Pittsburgh, retrofitted them for spuds and moved them to the La Porte fleet. The fleet currently has a capacity for 40 to 50 30,000-barrel tank barges. If permitting is approved to dredge the fleeting area, that capacity could swell to more than 170.

“The vision behind our fleet in La Porte is to be able to provide a total logistics solution, specifically targeting our tank barge customers,” Muñoz said. “With our barge fleeting locations east of IHNC, in the river adjacent to IHNC Lock, upriver at Bayou Fleet and over in Houston, it allows our customers to have different opportunities and choices to be able to utilize that total logistics package.”

Since launching the fleet in La Porte, the Turn Services team has spent time listening to customers to learn what assets or services would make the new fleet most useful and competitive.

“Over the past nine or 10 months, we felt out the needs of our customers—where and what they needed—and said we’d build this organically from there,” said Lucian Lott, who works in business development for Turn Services. “The feedback continuously was ‘Do you have a retractable-wheelhouse boat?’”

“Houston is one of those unique areas, like the Lemont-Chicago area on the Illinois River, where you need vessels that can go under low bridges and other obstructions,” Muñoz said.

Retractable-wheelhouse towboats allow operators, in particular, to service industry north of I-10 in Channelview. The capabilities of a retractable towboat plus the location of the La Porte fleet, free of the congestion of Channelview and some of the other bayous that feed into the Houston Ship Channel, proved an appealing combination for Turn Services.

But retractable-wheelhouse towboats are a relative rarity on the inland waterways of the United States. Existing retractables are typically hard at work and not available for purchase, and building from scratch posed too long of a time frame. Thus, the Turn Services team began to look for a conventional towboat that would be a good candidate for converting to a retractable. That search coincided with Blessey putting the Rick Pumphrey up for sale. Muñoz said the Rick Pumphrey checked all the boxes, and by spring of this year, Turn Services had bought it and a second vessel from Blessey Marine. Which shipyard did Turn Services pick for handling the conversion? Verret Shipyard.

“We bought it in March, pushed it over here with the other boat we bought from Blessey, dropped it at Verret, and it’s been in Ted’s hands ever since,” Lott said.

Muñoz said it made perfect sense for Verret Shipyard to do the conversion. Besides recent experience building retractables, Verret already knew the vessel inside and out from a design and engineering standpoint.

“Lots of modifications had to be made to accommodate an area for the pilothouse to operate and for all the equipment necessary for its operation, above and below deck,” Ted Verret said. “The galley had to be modified by removing a 7-by-7 area in the main deck  forward to enable a 6-by-6 pilothouse to fit.  In doing so, a port forward wall had to be removed to create a small dining area and access to bathroom. The transverse fuel tanks were modified by creating two wing tanks with equalizing line and valve and also installing a bulkhead for the forward water tank.”

Forward, the boat had to be modified to house the three guides for the wheelhouse, the main hydraulic ram, two hydraulic power packs, the air tank for backup air, all the controls and the electrical switchgear, starters and breaker panel, Verret said. Global Marine Technologies provided new outboard profile and general arrangement drawings for the conversion process.

Verret Shipyard removed the original steel wheelhouse on the towboat and replaced it with an aluminum structure. With the wheelhouse in its lowest position, its air draft is 19 feet, 7 inches. Raised, the air draft is 36 feet, 5 inches.

Muñoz praised both the Verret Shipyard team and the Turn Services team that has been involved with developing the vision for the La Porte fleet, finding a towboat ideal for converting into a retractable and shepherding the conversion project to completion.

“Verret Shipyard did an amazing job for us, both the actual construction and also helping engineer the project,” Muñoz said. “Also, our internal team of operations, maintenance and compliance stayed on the project from day one to ensure this came out as an A-plus conversion project.”

That internal team included Lucian Lott and his brother, Trevor; Brad Chauvin, vice president of boat operations; Ronald Breaux, director of vessel maintenance; Raymond Arcenaux III, port engineer; Bob Mueller, senior vice president of compliance; and Mary McCarthy, vice president of regulatory affairs. McCarthy said the vessel is ready for its Certificate of Inspection audit and will be ready to depart Plaquemine for La Porte as soon as its COI is in hand.

Turn Services renamed the vessel the mv. Zenyatta, the same name that a former company vessel also carried. Like other Turn Services vessels, the Zenyatta is named for a champion American thoroughbred racehorse. Zenyatta, a filly, was named the 2010 American Horse of the Year and was inducted into the National Museum of Racing’s Hall of Fame in 2016. Interestingly, the horse was named after the Police album “Zenyatta Mondatta.” The horse’s owner, Jerry Moss, is a record producer whose A&M record label released Zenyatta Mondatta in 1980.